Days of Our Lives Spoilers: Kristen Threatens to Shoot Chloe – Armed and Dangerous After Prison Escape 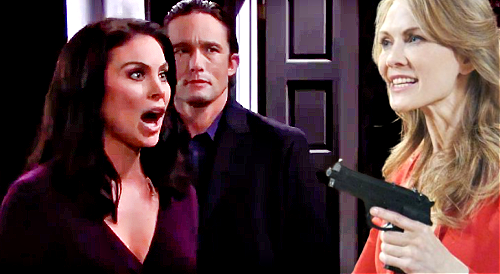 Days of Our Lives (DOOL) spoilers tease that Chloe Lane (Nadia Bjorlin) may find herself staring down the barrel of a gun! DOOL fans know Kristen DiMera (Stacy Haiduk) has already been on edge over Chloe and Brady Black’s (Eric Martsolf) bond.

Kristen doesn’t like the idea of Chloe cozying up to her ex-husband, but Brady was able to reassure Kristen recently and settle the issue for now.

However, Kristen will have a brand-new reason to go after Chloe during the week of January 25-29. Days of Our Lives spoilers say Brady will be rushed to the hospital – and Kristen may hold Chloe responsible.

Days of Our Lives spoilers say Brady will get shot as the mob battle turns bloody in Salem. Seething Kristen might want Chloe to pay since she’s the reason Brady got involved.

Whatever the case, Days of Our Lives spoilers say Kristen will make a prison escape using Tony DiMera (Thaao Penghlis) as a hostage. Kristen will likely score a gun after getting the upper hand on a guard, so that’ll leave her armed and dangerous soon after.

Once Kristen tracks Chloe down, she’ll threaten to pump a bullet in her rival for Brady’s affections.

Of course, Chloe isn’t interested in Brady romantically, but she may struggle to convince Kristen of that. It’s easy to imagine Kristen showing up as Chloe’s crying by Brady’s bedside and telling him she loves him.

There might be a confession that Kristen overhears and deems not so platonic, even if she’s just misunderstanding the situation.

Kristen could point her gun at Chloe and insist Brady’s ex-wife had better back off immediately. She may accuse Chloe of being the one to put Brady in this life-threatening predicament and argue that she’ll take over from here.

No matter how this plays out exactly, Days of Our Lives spoilers say Kristen will indeed warn Chloe that she could shoot her. Based on Kristen’s dangerous history, Chloe will know she means it! This showdown will bring some wild DOOL drama, so be sure to tune in.