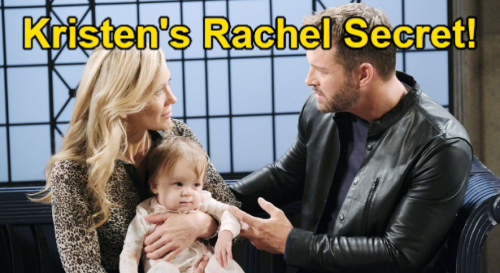 Days of Our Lives spoilers reveal that fans haven’t seen the last of Kristen DiMera (Stacy Haiduk). The villain is likely returning since she remains a fugitive. Kristen called Brady Black (Eric Martsolf), but was refused a visit with Rachel Black. Kristen is not going to just give up and is laying low plotting her next move. What if she’s in Salem and already influencing little Rachel?

DOOL spoilers reveal that Kristen has been fixated on punishing Chloe Lane (Nadia Bjorlin) ever since that platonic New Year’s Eve kiss.

Over time, Kristen’s rageful obsession didn’t fade but intensified. Even though Kristen is on the run, her mind is likely still on Brady and Chloe. It would be too difficult for Kristen to just move on and she always needs someone to blame.

The last time Brady had contact with Kristen, she had called to feel out her ex. However, she was furious when Brady rejected her. Not only did he turn Kristen down, but confirmed that it was because of Chloe.

What Brady meant is completely different than what Kristen heard, though. In any case, Kristen vowed revenge and she hasn’t forgotten about that.

Days of Our Lives spoilers reveal that it’s about time for Rachel to be SORAS’d. The last time Rachel was seen on-screen, she was just an infant. Then, she had an off-screen birthday and the little girl hasn’t been seen since. By the time she appears on-screen again, she’ll probably be in elementary school.

Brady hopes that his daughter turns out to be a sane and good person. However, there is a chance that Rachel could turn out to be just like Kristen. The only thing Kristen has ever wanted was a child of her own.

So, for Kristen to not try to see Rachel or kidnap her means something is already cooking.

There is a good chance that Kristen might already be in Salem, perhaps even hiding in the DiMera tunnels or one of the many vacant properties the family owns.

What would truly be terrifying for Brady is if Rachel began displaying behavior like Kristen’s. Assuming it was genetics, Brady might try to get her professional help before something terrible happens.

What if it’s not genetics, though? What if Kristen is secretly visiting and influencing the little girl? If it’s only just begun, then Brady can quickly cut the cord and protect his little girl.

If Rachel is SORAS’d and Kristen has secretly been influencing her daughter for years, then that is a huge problem. How does Brady undo that kind of twisted psychological damage?