Days of Our Lives Spoilers: Lucas Rescues Sami from Captivity 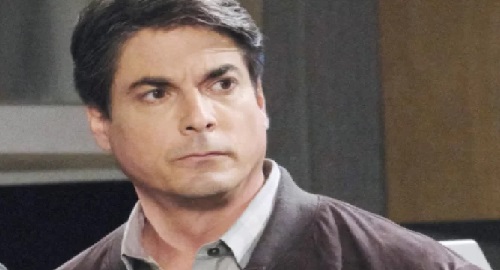 Days of Our Lives (DOOL) spoilers tease that Lucas Horton (Bryan Dattilo) will rescue Sami Brady DiMera (Alison Sweeney) from captivity, but it’ll start with a phone call to Allie Horton (Lindsay Arnold) that kicks off a frantic search.

Sami managed to reach out to Marlena Evans (Deidre Hall), who was chained up in the crypt and unable to help her. Of course, the devil is now in control of Marlena again, so Sami’s mother won’t be offering any assistance during this captivity crisis.

Sami couldn’t get much out when she contacted EJ DiMera (Dan Feuerriegel) before the phone went dead, but she won’t give up during the week of November 29-December 3. Days spoilers say Sami will launch a sneak attack on her guard, who’s named Jason (Noel Gugliemi) and won’t see Sami’s violent outburst coming.

Sami will use her dinner tray to whack Jason in the head, so he’ll be out cold when she makes a break for it. DOOL fans can expect an excited Sami to burst through the door and hope she’s well on her way to freedom, but there’ll be a huge problem.

Sami will soon realize the only thing on the other side of that door is yet another door – one that’ll be locked up tight and leave her trapped with a soon-to-be furious Jason. However, Sami will think fast and steal Jason’s phone again while he’s unconscious.

Days spoilers say Sami will decide to call her daughter this time – and as luck would have it, Allie will be with Lucas when the call comes in. Some father-daughter time at the pub will turn into a dramatic rescue when Allie hands Lucas the phone and lets him talk to Sami.

Although Sami doesn’t know where she is or why she’s been locked up, Lucas will figure out some way to follow the trail and track her down. That means a dramatic rescue is looming, so Lucas should lead the charge and finally free Sami.