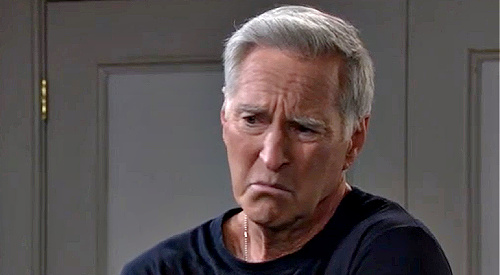 Days of Our Lives (DOOL) spoilers tease that Marlena Evans (Deidre Hall) will kidnap John Black (Drake Hogestyn) and hold him captive in the creepy DiMera crypt. The devil’s terrible torment will lead to some Halloween trouble, so let’s talk about what’s coming up for Days fans.

The devil will face some close calls as John works to prove Marlena is possessed once again. However, it’ll ultimately be Doug Williams’ (Bill Hayes) session tape that proves the devil has returned.

John will end up confronting Marlena after listening to the tape, so the devil will have to take action against him.

It’s far too early for this DOOL story to wrap up, so John will become the devil’s hostage.

Once John corners Marlena and demands answers at St. Luke’s, he’ll presumably be knocked out and dragged to the DiMera crypt to avoid exposure.

That’s where Marlena will taunt and torture John since she’s not herself anymore. Marlena has become one with the devil, so she’s no longer in control of her behavior. Anything that happens from here on out will be strictly the devil’s doing.

Marlena would never in a million years hurt John on purpose, but the devil will be running the show – and he’ll fully enjoy tormenting a locked-up John.

Days spoilers say things will get particularly intense on Halloween night, which will play out on October 29 in Salem.

The devil will wreak havoc on the town, but he’ll carve out some time to make sure John suffers. Of course, John will be most concerned for Marlena in the midst of all this.

John will be desperate to free Marlena from the devil’s control, but it looks like nothing short of an exorcism will help!

While John’s stuck as possessed Marlena’s captive, the devil will bring major drama and mess with plenty of lives. We’ll keep you in the loop as other Days news becomes available.

Days of Our Lives spoilers say John won’t give up on Marlena and the love they share.

John will do whatever it takes to gain his freedom and bring Marlena back from the evil that inhabits her.

CDL’s the place to be for scorching Days of Our Lives spoilers, news and updates, so make us your top DOOL hotspot.