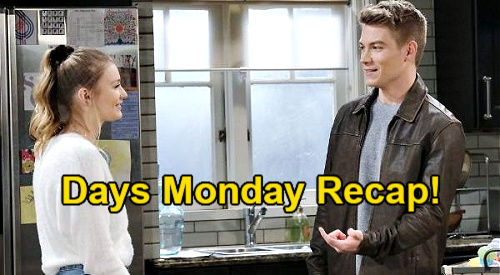 Days of Our Lives (DOOL) spoilers recap for Monday, February 22, reveal that Steve Johnson (Stephen Nichols) and Kayla Johnson (Mary Beth Evans) returned to the Brady Pub, fresh back from their honeymoon.

Roman shared that Carrie and Austin were back together, which made him happy, but he wasn’t so happy to hear from Steve and Kayla about Charlie Dale (Mike C. Manning) walking on the rape charges. Steve and Roman seemed to share a look when Kayla denounced vigilante justice against Charlie.

At Nicole Brady’s (Arianne Zucker) apartment, Allie Horton (Lindsay Arnold) got a visit from Tripp Dalton (Lucas Adams). Lucas had stopped by to accept Allie’s apology from the other day, which Allie greatly appreciated. As they were talking, Henry Horton (Jayna and Kinsley Fox) cried, and Allie brought him out.

Allie explained that Henry was teething, and Tripp held him while she prepared a bottle. Tripp cutely held and soothed Henry, and Allie was impressed. Tripp and Allie seemed to be sweetly taken by each other, and after Tripp left, Allie smiled to herself.

At the Brady house, Claire Brady (Isabel Durant) called Charlie and asked him to come over. Claire prepared the recorder on her phone to get a confession from Charlie. Soon, Charlie arrived, and Claire told him that everyone wants her to steer clear of him, but that it only matters what she thinks.

Claire went on to say that she believes Allie, but that she thinks she can get past it, because other people got past the terrible things she did in the past. Claire described how she set fires that nearly killed three people, and she said that she loved Charlie but that they needed to rebuild trust between them.

Claire then asked Charlie for the truth about what happened with Allie, and Charlie described in detail what happened, and he admitted that he raped Allie. Charlie cried as he said that he couldn’t stop himself, while Claire’s hidden phone kept recording the conversation.

Kristen DiMera (Stacy Haiduk) called Susan from the prison, asking Susan if she did as instructed. “Yes,” Susan said, walking out into the hallway. Susan pulled off a black wig and revealed “Kristen” hair underneath.

Susan told Kristen that Brady was with Chloe right now, and Kristen said that they needed to trade places right now. Kristen mentioned that she pulled some strings and got teeth and blue contacts for Susan.

At Statesville Prison, Kristen hung up from her call with Susan to find Vivian Alamain (Linda Dano) eavesdropping.

Vivian said that she knew what Kristen and Susan had planned, and that she’d go to the warden unless Kristen broke up Kate DiMera (Lauren Koslow) and Jake DiMera (Brandon Barash) when she got on the outside. Kristen agreed.

Later, Susan showed up in the visiting area, wearing dentures to make her teeth look like Kristen’s. Vivian scared Susan, who thought Vivian was a vampire who came back from the dead. Vivian called Susan a nut job, which ruffled Susan. Vivian then faked a heart attack with great bravado.

A short time later, viewers saw Susan dressed as Kristen in prison garb interacting with Vivian in the visiting area. Susan suggested that she and Vivian could be cellmates, but Vivian went vampire and threatened to suck Susan’s blood in the middle of the night. Susan reeled.

Back at the penthouse, Brady and Chloe were working, but Brady seemed fixated on Philip Kiriakis’ (Jay Kenneth Johnson) obsession with Chloe. Chloe revealed that Philip had kissed her, and Brady was irked. Chloe said that she had no feelings for Philip, which Brady wasn’t sure whether he should believe.

A short time later, Kristen (dressed as Susan) walked into the penthouse and immediately saw Brady and Chloe in a compromising position, as Chloe was crouched down in front of Brady attempting to change his wound dressing. Kristen fumed.

Days of our Lives is really heating up – you won’t want to miss tomorrow’s episode, so be sure to tune in! Stick with the NBC soap and don’t forget to check CDL often for the latest Days of Our Lives spoilers, daily episode recaps, and news.