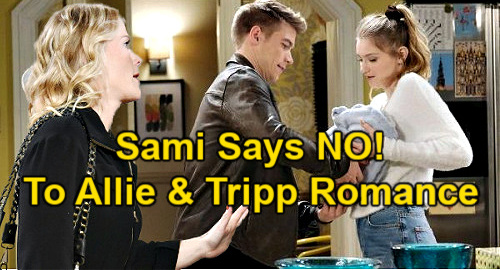 Days of Our Lives (DOOL) spoilers tease that Allie Horton’s (Lindsay Arnold) growing bond with Tripp Dalton (Lucas Adams) could lead to some trouble – especially since it could mean growing closer to Ava Vitali (Tamara Braun), too!

During the week of March 8-12, Allie will decide to make a nice gesture and allow Ava to spend some time with her grandson, Henry Horton (Jayna and Kinsley Fox).

Ava will hold little Henry in her arms and feel an instant connection to him. It’ll be an emotional experience that Allie will surely take notice of. That could lead Allie to believe that Ava is truly turning over a new leaf – especially since Days spoilers say Tripp will defend the changes he’s seen in his mom.

Of course, Ava could easily come to like the idea of Tripp and Allie raising her grandchild together. Charlie Dale (Mike Manning) is dead and gone, but Ava might hope some good can come out of that nightmare if Tripp, Allie and Henry all form a happy family.

Since Allie seems to be crushing on Tripp a bit now, Ava might even nudge things along with some matchmaking. However, Sami Brady DiMera (Alison Sweeney) might feel like a Tripp and Allie romance is a terrible idea.

Although Tripp wasn’t guilty of assault, he’s still Ava’s son and that alone could make him a threat in Sami’s eyes.

Days of Our Lives spoilers say Sami will be the top suspect in Charlie’s murder for a while, but she’ll stand by her innocence. Sami might even point the finger at Ava and act like Charlie’s own mother was the true culprit.

There’ll be some easy ways for DOOL writers to form a fierce feud between Sami and Ava in the coming months.

As for Allie and the blooming love that may be ahead with Tripp, their dueling mothers could certainly complicate things. Sami may do her best to keep Allie from heading down a romantic road with Tripp, but stubborn Allie’s no doubt going to do whatever she wants anyway.

Nevertheless, Days of Our Lives spoilers say Sami will shake things up for several Salemites – including her daughter. Since Tripp and Allie’s romance seems to be in the works, Sami just might try to forbid it.

It would definitely be in line with Sami’s usual overbearing behavior. Since Ava previously threatened to kill Allie and Charlie was behind the attack in London, it’s easy to see why Sami wouldn’t want her daughter mixed up in Tripp’s dark family. The same goes for Henry!

As other Days news comes in, we’ll deliver more updates. DOOL fans won’t want to miss the Sami shockers ahead, so stay tuned. CDL’s your go-to source for scorching Days of Our Lives spoilers, updates and news, so stop by frequently.