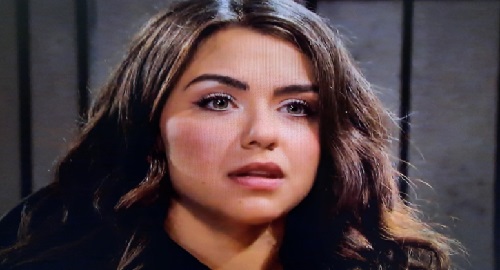 Days of Our Lives (DOOL) spoilers recap for Thursday, December 2, reveals that Ciara Brady Weston (Victoria Konefal) feared for her baby at the isolated cabin while Philip Kiriakis (Jay Kenneth Johnson) moved forward with a violent ambush for Brady Black (Eric Martsolf). Here’s how all the action played out on Thursday’s DOOL episode.

At the cabin, Ben Weston (Robert Scott Wilson) assured Marlena Evans (Deidre Hall) that she’d be safe there and didn’t have to worry about John Black (Drake Hogestyn) anymore. Marlena praised Ben for being about the best friend she had in Salem and felt he should consider any debt paid for doing this.

After freshening up on Thursday’s Days episode, Ciara returned to find Marlena and Ben in a warm embrace. She seemed uneasy and admitted she still found it hard to believe the out-of-control John that showed up was the same wonderful man she’d known all her life.

Ciara felt like they should get the police involved and insisted that Shawn Brady (Brandon Beemer) would protect his mother-in-law. However, possessed Marlena snatched the phone out of Ciara’s hands and argued that she couldn’t take that chance.

Marlena claimed John would just get a slap on the wrist due to people he knew in the police department and would be even angrier when he came after her. Ben sided with Marlena and agreed no one was making any calls. He pointed out that the cell service reception there was terrible anyway.

Ciara worried about being so isolated since something might go wrong with the baby, but Marlena said she was a doctor and would be there to make sure everything was fine. Ciara still felt like something was off about this whole scenario and privately suggested to Ben that they should tell Belle Brady (Martha Madison). She felt Shawn would never forgive her for keeping all this hidden.

Ben argued that they couldn’t go against the doctor – and moments later, there was a knock at the door. Marlena returned from the bathroom and warned Ben not to open it since it could be John. She begged Ben since they just didn’t know who was on the other side of that door.

At the hospital, John and Brady discussed Marlena’s possession before Paulina Price (Jackée Harry) arrived. Paulina realized the story in the news was true – that Marlena was really possessed by the devil. She believed John when he explained and admitted that Marlena had taken a wrecking ball to her life.

John noted that Marlena never would’ve broken doctor-patient confidentiality if she’d been her usual self. Paulina understood that, but she still wished she hadn’t given the devil ammunition to blow her life to smithereens. Although Paulina feared Abe Carver (James Reynolds) would never forgive her, John felt it was possible since Abe had gotten past the unforgivable with Lexi Carter (Renee Jones).

At home on Thursday’s Days episode, Lani Price-Grant (Sal Stowers) sat down with Abe as they reflected on Paulina, Tamara Price (Marilyn McCoo) and Olivia Price (Marla Gibbs) all being in on the elaborate lie. Lani admitted she’d been avoiding Tamara’s calls and wasn’t sure how she could forgive the pain caused by this deception.

Abe pointed out that after Roman Brady (Josh Taylor) died, they were eventually led to believe amnesiac John Black was Roman. When the real Roman showed back up years later, Abe argued that it didn’t diminish the love they had for John. Abe didn’t think the heart worked that way and felt love was more important than DNA.

Abe made it clear that Lani was still his daughter and always would be. The same idea applied when it came to his grandchildren. Whether Lani could forgive everything that happened was between her and God – and whether Abe would forgive Paulina was between him and her, though he chuckled that God would probably be involved.

Lani and Abe agreed that they helped each other feel better about the situation. They called each other “my daughter” and “my dad” as they shared a sweet hug. After Abe left, Lani noticed that Tamara was calling her cell phone again. “Hi, Mom,” Lani said as she picked up.

When Abe showed up at the hospital to see John, he got off the elevator and bumped into Paulina as she was leaving. Meanwhile, Chloe Lane (Nadia Bjorlin) found Philip sitting in his dark bedroom watching TV. Chloe said she knew the truth and pushed Philip not to deny it.

Philip flashed back to ripping their tree out of the ground and said he could explain. Before he could, Chloe pointed out that she stopped by the Titan office and found out Philip had been fired. She was upset about hearing this from Philip’s former assistant and felt Philip should share everything with her since they were a couple.

Philip thought back to overhearing Brady and Chloe’s secret about what went down on the conference table. He asked Chloe if she shared every intimate detail with him, so Chloe acted like Philip made that hard to do since he wouldn’t let her in emotionally.

Philip was apologetic over being in a funk and agreed to clean up while Chloe went out for some takeout. Once Chloe left, Philip grumbled about Chloe running off to her other boyfriend and ultimately eavesdropped downstairs.

Maggie Kiriakis (Suzanne Rogers) and Victor Kiriakis (John Aniston) discussed how Brady thought he could be happy with Chloe if Philip wasn’t in the way. Victor wondered if Brady might do something to hurt Philip, but Maggie immediately dismissed that possibility.

Even so, Victor felt like a good man could be driven by jealousy to the darkest places. Philip listened to all that and took off while Chloe ran into Brady outside the pub. They had an awkward interaction before Chloe wound up at the Kiriakis mansion, where she asked Maggie where Philip had disappeared to.

Outside the pub again, Brady took a call from Tate Black (Collin and Kyle Schroeder) and praised his boy for scoring the winning goal at the championship game. After Brady hung up, Philip appeared behind him and knocked him out with a crowbar.