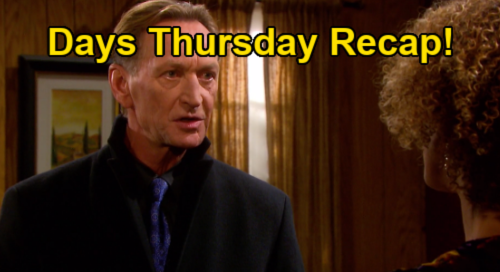 Days of Our Lives (DOOL) spoilers recap for Thursday, January 14, reveal that Lani Price-Grant (Sal Stowers) and Eli Grant (Lamon Archey) rushed out of their apartment after getting Justin Kiriakis’ (Wally Kurth) call about Bonnie Lockhart (Judi Evans) having seen their twins. “We just got our first legit lead,” Eli told Lani.

At the Brady Pub, Bonnie told Justin that she didn’t know if she’d be of much help in finding the babies, but Justin insisted that Bonnie couldn’t let Eli and Lani down. Just then, Valerie Grant (Vanessa Williams) walked in and overheard the conversation and she rushed off to the police station with Justin and Bonnie.

At some hotel, Dr. Amanda Raynor (Victoria Platt) opened the door to Ivan Marais (Ivan G’Vera), who had come to pay Dr. Raynor and collect the babies. Ivan commended Dr. Raynor on a job well done, and Dr. Raynor said that she was ashamed of what she did.

Dr. Raynor noted that the babies’ parents were cops and wouldn’t give up, but Ivan was nonplussed by the conversation.

Ivan then gave Dr. Raynor a bag of cash, and Dr. Raynor asked if Ivan planned to sell the babies on the black market. Ivan said that he’d procured the babies for someone else and that it was none of Dr. Raynor’s concern. Ivan left with the babies, and then placed a call. “It’s me Madam,” Ivan said. “I am on my way home.”

Chad rehashed everything that Gwen had done, and he lamented that he should have listened to Abigail, but instead he got drunk and slept with the nanny.

Later, Kate was alone when Abe Carver (James Reynolds) came along. Kate asked if there was any news on the twins, and Abe shared that he felt frustrated that he couldn’t do anything to help Eli and Lani.

Abe showed Kate some photos of the babies, and Kate offered to write up a press release on the kidnapping, hoping that it might help.

At the DiMera mansion, Abigail said that she didn’t believe that Gwen had slept with Chad. Gwen went on, gloating and describing how Chad held her.

Abigail fumed that Gwen was out to destroy Jack Deveraux (Matthew Ashford) and Jennifer Deveraux (Cady McClain) as well, and she wanted to know how Gwen knew about the letter that Jack wrote to Kate.

Gwen said that she overheard Jack and Kate having a conversation about their affair, and then she found the letter in Kate’s room. Abigail told Gwen to get out of the house, but Gwen kept going on about New Year’s Eve and about how she got Chad to distrust Abigail and go to the Salem Inn.

Gwen recounted how Chad drank all the champagne and how they kissed. “He was drunk and you took advantage of him!” Abigail fumed. Gwen said no, and she described how Chad had gone on that night about how Abigail uses her mental illness as an excuse to cheat.

Abigail then started crying, realizing that Gwen was telling the truth.

Gwen made a crack about Chad being a talented lover, and Abigail hauled off and slapped her, just as Chad walked in the room. “You told her,” Chad said, noting that he was just coming home to tell Abigail the truth.

Abigail asked why Chad didn’t tell her the truth before, and Gwen interjected that Chad was afraid it would push Abigail back over the edge.

Gwen said that she was leaving, and she smugly walked out. Chad said that he had been drunk and wanted to hurt Abigail the way she had hurt him. Abigail fired back that she never cheated on Chad in the first place.

Chad started crying, saying that he was sorry and ashamed. Abigail said that Chad not believing her was what hurt the most.

Abigail went on, saying that she begged Chad to believe her when Gabi DiMera (Camila Banus) had been gaslighting her. “You promised me that you weren’t going to doubt me again,” Abigail said. Chad moaned that they could get past this again, but Abigail didn’t think so, and she left as Chad broke down and cried.

At the Salem PD, Eli and Lani rushed in and got the scoop from Valerie about what was going on with Bonnie. As it turned out, Bonnie was in the interrogation room working with a sketch artist, but Bonnie was frustrated that she didn’t remember more about the woman she saw with the babies.

Finally, Bonnie produced a sketch, but it turned out to be a likeness of Valerie. Bonnie apologized to Lani, saying that she just didn’t remember much. Lani begged Bonnie to try harder, and Bonnie looked at a photo of Carver Malcolm Grant’s photo, saying that’s the baby she held yesterday. Bonnie vowed to do this for Lani.

Later, Bonnie had produced another sketch, and when Eli brought the sketch out to show Lani and Valerie, Valerie said that she knew that woman. Lani agreed that the woman looked familiar, and after putting the sketch through some computer program, Dr. Amanda Raynor came up.

Back in town square, Kate was hanging out when Gwen came strolling along all happy. Kate told Gwen that Chad was on his way to confess everything to Abigail, and Gwen gloated that Chad was too late and that she already told Abigail.

Kate pressed for Gwen’s reasons for ruining Abigail’s marriage, but Gwen wouldn’t give up her reasons.

That was a terrific episode of Days of Our Lives, so be sure to tune in! Stick with the NBC soap and we’ll keep you posted on all the latest Days of Our Lives spoilers, daily episode recaps, and news.