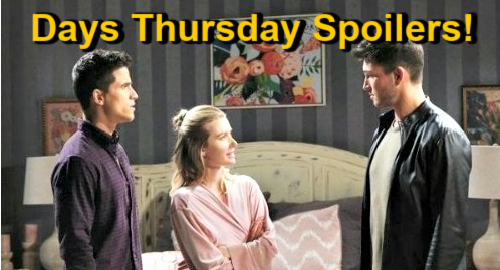 Days of Our Lives (DOOL) spoilers for Thursday, January 7, tease that Ava Vitali (Tamara Braun) will regain consciousness and most likely assume she’s hallucinating again. However, Rafe Hernandez (Galen Gering) is there in the flesh and will assure Ava he’s going to get her some help.

Ava will cling to Rafe’s arm as he calls for paramedics – and she won’t be doing much better once she’s admitted to the hospital. Days spoilers say Ava will still be seeing things that aren’t there and will remain in an agitated state.

Kayla Brady (Mary Beth Evans) will freak Ava out when she comes at her with a syringe, but Kayla may insist she just wants to give Ava a sedative to calm her down.

It looks like Ava may mention something about her son, Charlie Dale (Mike Manning), so Kayla may think Ava’s just making stuff up due to how delusional she is.

Nevertheless, DOOL fans can expect Rafe to offer updates to Kayla eventually. Kayla will realize it’s true – that Charlie has a son and he’s suspected of being behind Allie Horton’s (Lindsay Arnold) assault.

That news will certainly throw Kayla for a loop, but she’ll try to focus on flushing Charlie’s drugs out of Ava’s system and getting her on the road to recovery.

Meanwhile, Claire Brady (Isabel Durant) will have a freak-out of her own after Ben Weston (Robert Scott Wilson) disrupts her lovemaking session with Charlie.

Ben will thankfully stop Charlie and Claire before things truly get started, but Claire won’t get what’s happening here. Whether Ben fully explains now or not, he’ll make it clear that Charlie’s not a good guy and needs to leave immediately.

After Claire puts her robe on, it seems she’ll take Charlie’s side and scold Ben for his interruption. Ben may argue that Claire can call her grandpa if she doesn’t believe him – and Claire may indeed call John Black (Drake Hogestyn) to hear his Charlie suspicions.

As for Charlie, he’ll have a showdown with Ben and then head back to his apartment. Days of Our Lives spoilers say Charlie will reel when he discovers his hostage mother is gone!

Charlie may think Ava escaped, but Rafe should appear and admit that he rescued her. It won’t be long until Charlie’s taken into police custody, so he’ll get busted and worry about his future.

Back at the hospital, Valerie Williams (Vanessa Williams) will get some news that’s a bit of a letdown. It’s worth mentioning that Lani Price-Grant (Sal Stowers) honored her father, Abe Carver (James Reynolds), through one twin’s name: Carver.

Valerie might be a hint disappointed about being snubbed when it comes to the babies’ names, but that doesn’t really seem like something she’d cause a fuss over.

There might be some other source of disappointment instead, but Days spoilers hint that there’ll be good news, too. It turns out Valerie will hand over a gift that Eli and Lani get a kick out of, so the mood should remain lighthearted.

Unfortunately, danger is looming for this family. Days of Our Lives spoilers say Eli and Lani will find out the twins are missing on Friday, so Thursday may be when the kidnapper strikes!

Major DOOL drama’s about to go down, so don’t miss all the action! CDL’s your one-stop source for sizzling Days of Our Lives spoilers, updates and news.