Days of Our Lives Spoilers: Tripp Becomes Henry’s Dad – But Will Allie Let Ava Have A Relationship With Grandson? 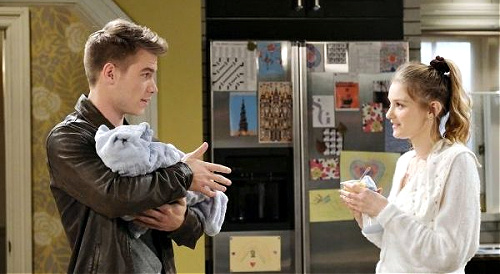 Days of Our Lives (DOOL) spoilers tease that Tripp Dalton (Lucas Adams) will seriously impress Allie Horton (Lindsay Arnold) in the coming days. Despite Allie having accused Tripp of raping her before she remembered that Charlie Dale (Mike C. Manning) was her attacker, it seems that Allie and Tripp will forge a bond between them.

According to Days of Our Lives spoilers, Allie will let Tripp hold Henry Horton (Jayna and Kinsley Fox), and it looks like Tripp might be a natural when it comes to babies and to soothing Henry. It should be a cute scene as Tripp holds Henry and bonds with Allie over the whole thing.

Well, as Days of Our Lives spoilers clearly indicate, Charlie’s on his way out, and his death will launch a full-scale murder mystery on the show. That will mean that Henry will never know his biological father, but that doesn’t mean that he can’t have a relationship with his uncle Tripp!

Perhaps Tripp will step up and be a father-figure to Henry going forward, and even a love interest for Allie, once they can get past the sting of Allie’s initial accusation of Tripp.

But that doesn’t mean that Allie, Tripp, and Henry are going to ride off into the sunset as a happy little family.

DOOL viewers will remember that Allie and Ava didn’t get started off on the right foot, with Ava attacking Allie for holding Tripp at gunpoint.

Plus, Allie may not want someone with Ava’s history to be around her son. And surely, once Sami Brady DiMera (Alison Sweeney) gets involved, things could heat up. Sami isn’t going to want her grandson to be around the likes of Ava, and there could actually be a big blowup between the respective grandmas.

So, the idea of Allie, Tripp, and Henry being a little happy family could be marred by a lot of extended family drama, especially if Tripp and Allie disagree sharply on the issue of Ava bonding with little Henry.

But something tells us that Ava won’t be deterred by a little drama, so Allie may have to get used to the idea of Henry having a relationship with her.

We’ll see what happens here, but there should be plenty of drama to go around as Allie and Tripp navigate their future together! Stay tuned to the NBC soap and remember that you can count on us here at CDL for all the hot new Days of Our Lives spoilers and news.