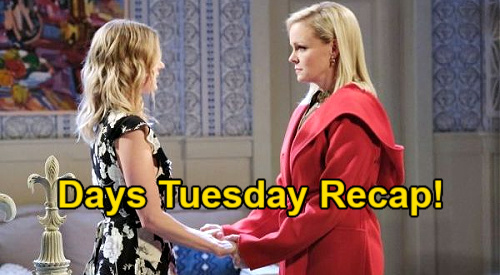 Kristen, who was disguised as Susan Banks (Stacy Haiduk), fussed with Brady and Chloe, saying that it looked like Chloe was trying to seduce Brady.

Kristen attempted to take care of Brady’s dressing herself, but Brady said he preferred for Chloe to do it, which incensed Kristen. Kristen went on, fussing about how Chloe was responsible for Brady getting shot, and Brady defended Chloe, saying that he didn’t blame her.

Kristen did her best to get rid of Chloe, and eventually Chloe left the penthouse.

At the Kiriakis mansion, Xander Kiriakis (Paul Telfer) prepared beverages for himself, Maggie Kiriakis (Suzanne Rogers), and Saran Horton (Linsey Godfrey). Sarah arrived and relayed that Maggie was off visiting Summer Townsend (Marie Wilson), who was dying and needed her mother.

Sarah said that Maggie didn’t want Sarah and Xander to put off their wedding.

Xander hated to have the wedding without Maggie, but he eventually agreed. However, Xander wasn’t so keen on having the wedding at the mansion, which Maggie really wanted, since Victor Kiriakis (John Aniston) had taken Philip Kiriakis’ (Jay Kenneth Johnson) side recently.

In the Titan Enterprises CEO office, Gabi DiMera (Camila Banus) was happy when Philip welcomed her onboard at Titan. Gabi went on about decimating Basic Black and DiMera Enterprises, and Philip wondered if Gabi was only after revenge against Jake DiMera (Brandon Barash). Gabi said that was a part of it.

Gabi and Philip bonded over each having been rejected in love recently. Philip explained that Chloe rejected him and still seemed to be attracted to Brady. Gabi thought that nothing took the sting out of rejection more than crushing one’s enemies. “Titan will thrive,” Gabi said, as she and Philip shook on it.

At the DiMera mansion, Kate DiMera (Lauren Koslow) was upset over Charlie Dale (MIke C. Manning) walking on the rape charge. “I have half a mind to go get my gun,” Kate said ominously.

Talk toon turned to Gabi, and Kate fumed about Jake’s apparent lingering attraction toward Gabi. Jake denied it, and he told Kate that Gabi came onto him, and that he flatly rejected her.

Kate was upset that this was the first she was hearing about Gabi’s seduction attempt, and Jake decided to take Kate upstairs and make love to show her how little he was thinking about Gabi.

Afterwards, Kate agreed to come to DiMera and work with Jake. As Kate went to shower, Jake got a text from Gabi saying that she made a deal with Titan and that this was war.

At the Brady house, Claire Brady (Isabel Durant) and Charlie continued their conversation. Claire thanked Charlie for opening up about the rape, and she said that she was in no position to judge after what she did in the past.

Charlie moved in for a kiss, but Claire pulled back and made excuses for why they shouldn’t go up to her room.

Charlie wanted Claire to come to his place, but she balked about that, too, Just then, Claire’s phone rang. “I thought you silenced your phone earlier,” Charlie said.

Charlie took the phone from Claire and saw that it was recording. Charlie immediately turned into Angry Charlie and yelled at Claire for setting him up, saying that she betrayed him.

Claire demanded that Charlie leave, but Charlie said, “You started it, now I’m going to finish it,” as he menacingly moved toward Claire. Claire yelled for help, and just then Belle Black (Martha Madison) rushed in and told Charlie to get away from Claire.

Claire blurted that she got a confession from Charlie on her phone, which was over on the sofa.

“I will kill you if you come near my daughter again,” Belle threatened. “Go ahead and try. I dare you,” Charlie fumed. And with that, Charlie turned to Claire and said, “Arrivederci.” Charlie walked out of the house, while Belle and Claire embraced.