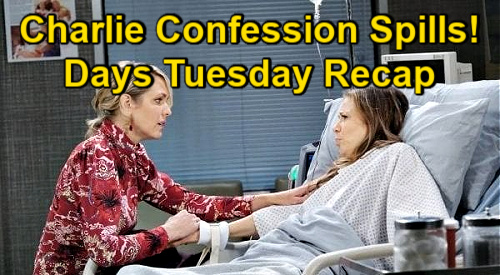 Belle and Shawn wondered where Claire Brady (Isabel Durant) was, and talk turned to Charlie Dale (Mike C. Manning). Shawn said that he had a bad feeling about Charlie and that he was going to keep an eye on him.

Meanwhile, over at Marlena Evans (Deidre Hall) and John Black’s (Drake Hogestyn) penthouse, Claire was agitated with Marlena and wanted to know what was going on and when John would be home.

Claire was about to leave and go find Charlie when John showed up. Claire demanded to know what was going on with Charlie, who she said was a great guy.

John said that he and Steve Johnson (Stephen Nichols) had been investigating what happened to Allie Horton (Lindsay Arnold) in London, and that the person who hurt Allie might be Charlie.

Claire got upset, and she insisted that the baby’s DNA matched Tripp Dalton’s (Lucas Adams) DNA. John revealed that Tripp had a younger brother named Charlie.

Claire insisted that there was no way that Charlie raped Allie, and she got very agitated. Marlena intervened, saying that perhaps Claire could help them get to the truth. Claire lashed out, saying that Marlena and John just wanted to destroy her relationship with Charlie based on a bunch of tiny coincidences.

Claire fumed, saying that she had finally found someone who loves her for who she is, and that she wasn’t going to let her grandparents ruin that.

Claire left in a huff to go find Charlie at the police station, and John then revealed to Marlena that Ava Vitali (Tamara Braun) had been tied up in Charlie’s apartment.

At the hospital, Rafe Hernandez (Galen Gering) and Nicole Brady (Arianne Zucker) found Steve by the nurses’ station. Rafe wanted to talk with Ava, but Steve said that Tripp was in with Ava now, and that Ava was pretty out of it. Steve went into Ava’s room, and he found Tripp with Ava, who was sleeping.

Steve relayed to Tripp that Charlie was being held for questioning at the police station, and Tripp wanted to go confront Charlie, but Steve persuaded him to let the police handle it. Tripp agreed reluctantly.

Near the nurses’ station, Rafe and Nicole chatted, and Rafe shared that Ava had been hallucinating and might have been drugged by Charlie. Tripp and Steve returned from Ava’s room with the news that Ava was barely lucid. Rafe decided to wait until morning to question Ava, and Nicole went into Ava’s room.

Ava woke up groggily when Nicole arrived, and Nicole offered friendship to Ava. Nicole said that Allie was her niece, and that she wanted the right person to be punished for Allie’s assault.

Nicole gently questioned Ava, who eventually remembered that Charlie had admitted to raping Allie before knocking her out and tying her up.

At the Salem PD, Allie told Charlie in the interrogation room that she deserved to know the truth. Charlie professed his innocence, saying that it was Tripp who attacked her. Allie confronted Charlie, saying that he might be Tripp’s half-brother, and she noted that Charlie had always seemed familiar to her.

Charlie repeatedly insisted that it wasn’t him, and that he wasn’t Henry Horton’s (Jayna and Kinsley Fox) father. Allie said that she gave birth to Charlie’s son, and she was incredulous that it didn’t matter to Charlie at all.

Suddenly, Claire rushed in the room wanting to speak to Charlie alone.

Allie ultimately left the room, and Claire told Charlie that she needed to know if any of what she heard was true. Charlie insisted that this whole thing was a big misunderstanding. “I want to believe that,” Claire said shakily. Charlie took Claire’s hands and told Claire that she knows him.

Claire said that Allie kept saying that she knew him from somewhere, and Claire wondered how Charlie could explain that. Charlie said that he couldn’t explain it, but that it didn’t mean that he attacked Allie.

Charlie swore that he was a good guy and wouldn’t hurt someone like that. “You believe me, right?” Charlie asked.

Back at the Salem PD, Charlie told Claire that getting to know her was the best thing that ever happened to him. “Don’t let them take away what we have,” Charlie urged Claire. Suddenly, Shawn entered the interrogation room and whisked Claire out of there as she protested.

Shawn and Claire went to the squad room, where they argued over Charlie. Claire said that Charlie just told her that he doesn’t even know who Ava is. Shawn then dropped the bomb, telling Claire that Ava was found tied up in Charlie’s apartment. Claire looked aghast.

Rafe entered the interrogation room to tell Charlie that his lawyer was on the way. Rafe told Charlie that he was lying, and that Allie meant a lot to him. “I will stop at nothing to get the truth,” Rafe said. “You WILL answer my questions.”

Finally, Nicole and Allie regrouped at the Brady Pub. Allie revealed that she had gone to the Salem PD to confront Charlie, who denied everything. Nicole shared with Allie that Charlie had admitted to his own mother that he was the one who raped her.

That was another great episode of Days of Our Lives, and there’s much more coming tomorrow, so stay tuned to the NBC soap! Here at CDL, we’ve got you covered with all the latest soap spoilers and news.