Days of Our Lives Spoilers: Victor Works to Save Xander & Justin – Last Hope For Kiriakis Men 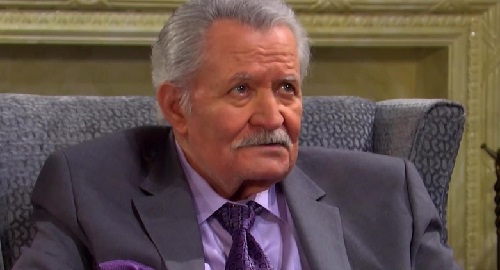 Days of Our Lives (DOOL) spoilers tease that Victor Kiriakis (John Aniston) will work his legal magic to save Xander Cook Kiriakis (Paul Telfer) and Justin Kiriakis (Wally Kurth). Victor will serve as the last hope to keep the Kiriakis men out of prison, so let’s talk about what’s ahead on Days.

For starters, we should point out that Victor would normally have zero interest in helping Xander. That’s where Maggie Kiriakis’ (Suzanne Rogers) influence should come in since she still has a soft spot for Sarah Horton’s (last played by Linsey Godfrey) former flame.

Maggie will probably give Victor a nudge that convinces him to come through for Xander along with Justin. Of course, Victor won’t be too happy with Justin either since he recklessly blackmailed Judge Smails (Richard Steinmetz) in hopes of saving Bonnie Lockhart (Judi Evans).

Victor literally threw a party after Bonnie was arrested, so he won’t like the fact that Justin took such a big risk for her sake. Now Justin’s facing jail time and potential disbarment – that is unless Victor can make all this go away.

Justin got in this mess by trying to prove Judge Smails was corrupt, but a corrupt judge could be what saves him in the end. Victor certainly has some judges in his pocket and plenty of money to throw around for bribes.

DA Melinda Trask (Tina Huang) intends to take Justin down for blackmail and Xander down for drug trafficking, but she may be thwarted by Victor’s sneaky efforts. You can bet DA Trask will unleash her fury again if Victor pulls this off.

What about Gwen Rizczech (Emily O’Brien) and her solicitation charges? Perhaps those could become a thing of the past once Justin’s blackmail charges are dropped. If that recording were to disappear from evidence – and DOOL fans know Victor has the kind of connections to make that happen – then it’d be a non-issue for both Justin and Gwen.

During the week of October 18-22, Days spoilers say Victor will start by trying to score Justin and Xander’s release. From there, Victor can work on a more permanent solution that should affect all parties involved. We’ll deliver updates as other Days news comes in.