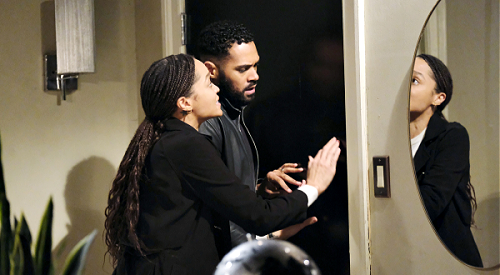 Days of Our Lives (DOOL) spoilers tease that Vivian Alamain (Linda Dano) will show her true colors during the week of February 8-12. Ivan Marais (Ivan G’Vera) will finally be forced to come out with the real story of how he ended up with these babies, so Vivian will have a big decision to make.

DOOL fans know Ivan previously acted like everything was on the up and up when it came to the double adoption. Other Days of Our Lives spoilers were clear that Vivian would indeed be involved in the kidnapping of the Grant twins, but the show put out info that was a bit misleading.

Vivian initially had no idea the babies belonged to Lani Price-Grant (Sal Stowers) and Eli Grant (Lamon Archey), but she’ll soon find out – and that’s where Vivian’s full participation in this scheme will come in.

After Vivian learns Eli and Lani have become Ivan’s captives in the Chicago townhouse, she’ll have to figure out how she’s going to deal with them.

Ivan might think they should make a run for it with little “Jacob” and “Stefania.” He’ll be sorry for deceiving “Madame” about how he acquired the stolen twins, but he’ll hope the plot can be salvaged.

With Eli and Lani locked up, this would certainly be a good opportunity for Ivan and Vivian to just take the babies and bolt.

Of course, Vivian has come around on the idea of raising these babies as her own. She also hates Lani and Eli with a passion, so she’ll settle on a better way to deal with them – at least it’ll be better to Vivian! In the week ahead, February 8-12, Vivian will decide there’s only one thing to do: kill Lani and Eli.

Vivian will want to get Eli and Lani off her back once and for all, so she’ll grab her gun. Days of Our Lives spoilers say Vivian will be determined to keep the twins, so she’ll have every intention of shooting Lani and Eli dead.

Vivian will feel like Lani deserves it for killing Stefan DiMera (Brandon Barash) and Eli deserves it for giving his wife his full support. DOOL viewers can expect some scary moments as this final faceoff arrives. Vivian will hold Eli and Lani at gunpoint, but they’ll fight to overpower Vivian.

It won’t be long until Vivian and Ivan are both arrested, so Lani and Eli will be reunited with Carver Grant and Jules Grant once the kidnappers are in handcuffs.

Days spoilers say Vivian will be hauled back to the police station along with Ivan, but don’t expect Vivian to give up! There’ll be one last trick up Vivian’s sleeve, so stay tuned for more drama.

We’ll fill you in as other DOOL news and updates emerge. Days spoilers say some shocking moments are in store as this kidnapping storyline winds down. CDL’s where you want to be for sizzling Days of Our Lives spoilers, updates and news, so stick with us.