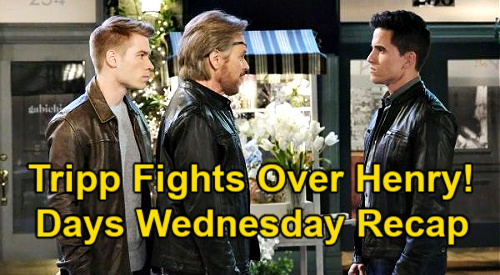 Belle immediately called Shawn Brady (Brandon Beemer) and asked him to come home, then she tried to soothe Claire, who was very upset about the scene with Charlie.

Belle was upset, too, and she said that Charlie was a monster who didn’t deserve to live. Claire lamented that she got Charlie on the recording admitting to raping Allie Horton (Lindsay Arnold), but now the recording was gone.

Claire went to bed upset, and soon Shawn arrived and learned what happened from Belle.

At the Hernandez house, Nicole Brady (Arianne Zucker), Ava Vitali (Tamara Braun), and Rafe Hernandez (Galen Gering) arrived to get Ava settled in. While Ava was out of the room, Nicole thanked Rafe for housing Ava, taking his hand and causing an awkward moment between them.

Later, Nicole went to Ava’s place to pick up her things, while Ava told Rafe that she wanted to take her life in a better direction now. “I want to lead a better life,” Ava said, crediting Nicole for helping her to see that she needed to do better for Tripp Dalton (Lucas Adams).

At Nicole’s apartment. Marlena Evans (Deidre Hall) checked in on Allie, who told the story about how Tripp came and visited with her and Henry Horton (Jayna and Kinsley Fox). Allie relayed how Tripp had calmed Henry down, and Marlena was glad to hear that Tripp had accepted Allie’s apology.

After Marlena left, Claire arrived, having snuck out of the Brady house. Claire told Allie about the earlier scene with Charlie and about recording his confession that was now erased.

Claire lamented about having fallen for Charlie, and she said she wanted to make him pay. Allie said that maybe it was time for her to deal with Charlie herself.

Allie noted that she almost shot Tripp once before, and she said that maybe she’d go through with it now…with Charlie. Claire objected, saying that Allie could go to prison, but Allie said that wouldn’t happen if she got away with it.

In the park, John Black (Drake Hogestyn) encountered Charlie, immediately manhandling him and telling him to stay away from Claire and Allie. Charlie told John about how Claire had just tried to trick him into confessing.

John got very concerned, telling Charlie in no uncertain terms that he was a dead man if he went near Allie or Claire again.

Charlie mused that John needed anger management because he was this close to having a stroke, and with that Charlie walked off. John then called Marlena, who showed up in the park and learned about how something had gone down between Charlie and Claire.

In town square, Steve Johnson (Stephen Nichols) and Tripp talked about how Tripp had accepted Allie’s apology and helped with Henry. “Henry will need me in his life” Tripp said, just as Charlie walked up.

“Like hell he will,” Charlie fumed. Steve intervened and tried to get Charlie to back down, but it only puffed Charlie up more.

Through their exchange, Steve said that if the authorities didn’t take care of Charlie, then he would. Charlie said that there was no proof that he’s a rapist, and Steve reminded him that he’s still facing charges for kidnapping Ava.

Tripp got in Charlie’s face, and Charlie proclaimed that Henry was his, and that Tripp wasn’t going anywhere near the little boy.

After Charlie walked away, Tripp lamented to Steve that Charlie could sue Allie for custody out of spite. Steve didn’t think that would happen, but Tripp said they didn’t know that, and that they needed to figure something out and fast.

At Ava’s apartment, Nicole was coming out with Ava’s things when Charlie materialized and wanted to see Ava. Nicole said that Ava wasn’t there, and she and Charlie proceeded to argue about the rape allegation and about Ava.

Charlie ranted about how Ava’s obsession with Tripp ruined his life, and now Tripp wants to steal Henry.

Charlie said that he’d rather see Tripp dead than anywhere near Henry. “Oh my God, did you just threaten to kill your own brother?” Ava said. “Why not?” Charlie said. “Then Ava would finally have enough love for me.” Charlie left, leaving Nicole unnerved.

Back at the Brady house, Marlena and John arrived and got the scoop from Belle and Shawn about what happened earlier between Claire and Charlie. Marlena explained that John had a run-in with Charlie, too.

John got upset and ranted, causing Marlena to tell him to call down. After Marlena and John left, Belle discovered that Claire was missing from her room.

Back at the Hernandez house, Nicole returned and was visibly upset due to her run-in with Charlie. As Rafe took Shawn’s call, Nicole told Ava about what Charlie did and said earlier, including his threat against Tripp.

Ava said that she’d handle this. “I brought Charlie into this world. Maybe I need to take him out,” Ava said ominously.

At Marlena and John’s penthouse, Marlena checked John’s blood pressure, which was elevated. As Marlena got John some tea, John took his keys and left.

Later that evening, Charlie was in his apartment pacing and ruminating about not letting “them” take what’s his. Someone pounded on the door, and when Charlie opened the door, he put his hands up and said, “Don’t shoot.”

Days of Our Lives is getting great, so stay tuned! We’ll be sure to give you updates as more DOOL news comes in. Stick with the NBC soap and don’t forget to check CDL often for the latest Days of Our Lives spoilers, daily episode recaps, and news.