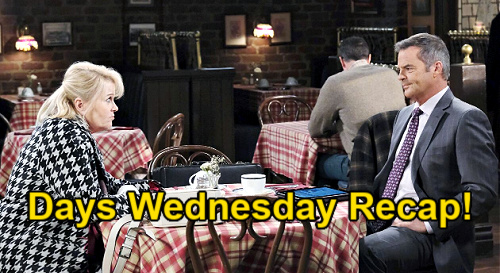 Chad DiMera (Billy Flynn) arrived, and Abigail wanted to know why Chad hadn’t thrown Gwen out. Chad made excuses, saying that he wanted the kids to say goodbye to Gwen.

Abigail said that she was leaving, and that when she returned, Gwen had better be gone for good. After Abigail left, Gwen told Chad that he’d better come up with a reason for her to stay, or else she’d tell Abigail about their affair.

Chad asked Gwen what she really wanted, and Gwen taunted him about how her big reveal could send Abigail back to the “looney bin.”

Later, Abigail came to see Jack and Jennifer, and she told her parents all about how Gwen was trying to get in between her marriage to Chad.

Abigail rehashed what happened on New Year’s Eve, and how Gwen stayed in the room at the Salem Inn with Chad. Jennifer told Abigail that Gwen had to hit the road, and Abigail agreed.

Jack asked how Abigail had found the letter he had written to Kate DiMera (Lauren Koslow), and Abigail said that Gwen made sure she found it.

Together, Jack, Jennifer, and Abigail determined that whatever Gwen is up to, she was out to get the whole family. Abigail decided to head back over to the DiMera mansion to deal with Gwen directly.

At Eli and Lani’s apartment, Lani woke from a nightmare about the twins to learn from Eli that there were no leads yet in the case. Lani lamented that this is her worst fear, and that this is why she didn’t want to get pregnant again.

Eli urged Lani to think like a cop, and together they realized that whoever took the twins was either desperate for a baby or wanted revenge.

Later, Julie stopped by and turned out to be more of a hindrance than help. Julie decided that it must be Gabi DiMera (Camila Banus) who took the babies, but a quick phone call revealed that this wasn’t the case.

Julie tried to help with some questions about the babies, but Lani urged Eli to get her to leave. Ultimately, Julie took off, and Eli and Lani went back to work.

At the Brady Pub, Justin Kiriakis (Wally Kurth) read the news about the twins on his tablet. Bonnie Lockhart (Judi Evans) entered and noticed that Justin was upset. Justin shared about the babies’ abduction, and eventually Bonnie offhandedly mentioned seeing a woman with two babies yesterday.

In town square, Jake and Kate strolled, and Chad came along wanting to talk with Kate. Jake took off, and Chad and Kate sat down to talk. Chad said that he had screwed up and didn’t know how to fix it.

Chad recounted how Gwen led him to believe that Jake and Abigail were having an affair, and then he disclosed the story of how he slept with Gwen on New Year’s Eve.

Back at the DiMera mansion, Jake arrived to find Gwen in the living room. After some bickering, Jake learned that Gwen had reserved the room at the Salem Inn on New Year’s Eve, and he realized that Chad hadn’t come home that night.

Gwen was smug, and Jake fumed that Gwen pretended to be Abigail’s friend and fed Chad garbage about him and Abigail.

Jake thought that perhaps Gwen had overplayed her hand, but after Jake left the room, Gwen told herself that she never overplays her hand, and that it was time to deal out the last few cards.

Soon, Abigail returned to find Gwen still at the mansion. Abigail said that before she threw Gwen out, she had a question, and she proceeded to ask Gwen if she led her to Kate’s letter.

Gwen answered affirmatively, and then she dropped the bomb, saying that she didn’t sleep in a chair on New Year’s Eve. “I slept with your husband,” Gwen gloated.

At some hotel, Dr. Amanda Raynor (Victoria Platt) tried to quiet the Grant twins. Dr. Raynor told the babies that she was sorry but that she didn’t have a choice, and that this whole thing wasn’t her idea.

Soon, there was a knock on the door, and Dr. Raynor answered, telling the person at the door that it was about time, and that the babies were ready to get out of there.

Finally, back at Eli and Lani’s apartment, Eli’s phone rang. Eli answered, and it was Justin. Justin told Eli that he was with Bonnie and that she may have seen the person who abducted his babies.

Days of Our Lives is bringing it on with the action, so tune in tomorrow for more great drama! Stick with the NBC soap and don’t forget to check CDL frequently for the latest Days of Our Lives spoilers, updates, and news.