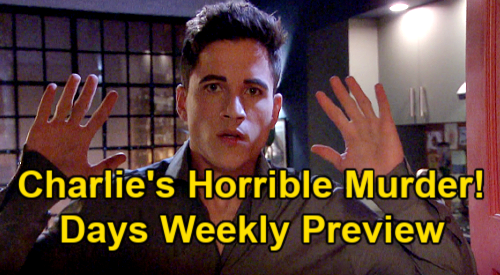 Days of Our Lives (DOOL) spoilers tease that viewers are in for a good old-fashioned whodunnit on the NBC soap. The new Days of Our Lives preview for the week of February 22 is out, and it’s all about a big upcoming murder, and the long list of suspects who will emerge in the aftermath of the death.

The preview makes it clear that the victim is who viewers have long suspected may meet his demise – Charlie Dale (Mike C. Manning). Charlie really has it coming, since he both assaulted Allie Horton (Lindsay Arnold) and kidnapped and drugged his mother Ava Vitali (Tamara Braun).

Either of these actions could have angered the wrong person – perhaps someone who will snap and kill Charlie.

The preview clearly shows Charlie getting confronted by someone at the door of his apartment. Charlie immediately puts his hands up and says, “Don’t shoot!” although it seems pretty clear at this point that his words will be in vain. It seems that Charlie is going to be shot, and that will be that.

But who will be the person who ends up doing the deed? The promo offers a long list of suspects, starting with Sami Brady DiMera (Alison Sweeney), who will return during the week of February 22.

In fact, Days of Our Lives spoilers indicate that Sami may be found with Charlie’s body, since she’s going to return on the very day that Rafe Hernandez (Galen Gering) will make a startling discovery and takes a murder suspect into custody.

The preview shows Sami sitting in the interrogation room at the Salem PD saying that Charlie is a “filthy piece of garbage.” Sami is probably talking to Rafe, and it looks like she could be the suspect that Rafe has hauled to the station.

Of course, Sami would have ample reason to want revenge on Charlie, since he assaulted her daughter.

But Sami’s not the only one who will have harsh words where Charlie is concerned. The preview shows Belle Black (Martha Madison) telling Claire, “That monster doesn’t deserve to live.”

That certainly sounds like it could be a threat, so we have to put Belle on the possible list of suspects in Charlie’s murder.

The preview also shows Charlie having some tense interactions with both Claire Brady (Isabel Durant) and Nicole Brady (Arianne Zucker), and he looks pretty menacing to both of them.

Both Claire and Nicole would be viable suspects, too, since they have each said repeatedly on the show that they want to make sure that Charlie pays for what he did.

Then there’s Tripp Dalton (Lucas Adams), who is shown in a tense stare-down in with Charlie in town square. And we can’t forget John Black (Drake Hogestyn), who will have a major run-in in the park during the week of February 22 and who’s shown in the preview telling Charlie that he’s a dead man. Woah!

Of course, John isn’t someone who would normally be thought of as a murderer, but we have to remember that he’s still recuperating from his aneurysm and could be suffering from anger management issues. And that would make John a viable suspect for Charlie’s murder.

And what about Ava herself? Perhaps if this was anyone other than Ava, we’d be tempted to say that a mother wouldn’t kill her own son. But Ava is Ava, and she doesn’t really love Charlie at all. Plus, Ava’s shown in the preview saying, “I brought Charlie into this world – Maybe I need to take him out.”

Of course, there are others who might potentially be on the suspect list – people with motive and means to commit Charlie’s murder. There’s of course Allie herself, whom we know has held someone at gunpoint before.

The preview also shows still shots of Steve Johnson (Stephen Nichols), Shawn Brady (Brandon Beemer), and Kate DiMera (Lauren Koslow), indicating that they could be in the mix.

We’ll see how the week of February 22 unfolds, but it looks like there will be several prime suspects and the viewers may be given some false leads along the way as this whodunnit kicks off!

Stick with the NBC soap and don’t forget to check CDL as often as you can for the latest Days of Our Lives spoilers, updates, and news.