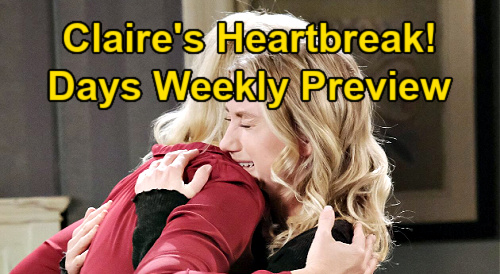 Days of Our Lives (DOOL) spoilers tease that viewers are in for a big week on the NBC soap. The new promo for the week of January 11 is out, and it’s all about the major relationship turmoil that some key DOOL characters are going to deal with in the coming week.

First off, Claire Brady (Isabel Durant) is going to have a seriously rude awakening when she learns that Charlie Dale (Mike C. Manning) isn’t the nice guy she thought he was.

That’s going to be a lot for Claire to take, especially since she was basically on the verge of declaring Charlie to be her soulmate and was about to become intimate with him.

The promo shows Claire crying and lamenting to Belle Black (Martha Madison) that she had fallen in love with Charlie. Look for Claire to have a terrible time this week as reality sets in about Charlie.

Next, the new Days of Our Lives promo addresses the emotional situation that will unfold between Chad DiMera (Billy Flynn) and Abigail DiMera (Marci Miller). As viewers are aware, Chad drunkenly slept with Gwen Rizczech (Emily O’Brien) on New Year’s Eve, and during the week of January 11, Gwen will make that known to Abigail.

“Your husband is a very talented lover,” Gwen is heard proclaiming to Abigail in the promo. That will cause Abigail to haul off and slap Gwen with everything she’s got – and let’s face it, Gwen deserves it!

Of course, as far as Gwen’s concerned, the damage is done, so Abigail can slap away, but she can’t change the fact that Chad cheated.

Abigail is also shown in the promo confronting Chad about his cheating. Of course, the whole thing will be a mess because Gwen will be the one who tells Abigail about Chad’s infidelity instead of Chad.

Abigail is NOT going to be understanding at all, and Chad is shown tearfully telling Abigail that they can get past this again.

Unfortunately for Chad, Abigail has been down this road before, and it looks like she’s not going to be willing to entertain his weepy “please forgive me” routine.

“You promised me never again, and here we are,” an angry Abigail tells Chad. It doesn’t look like Abigail is going to be forgiving Chad anytime soon!

It looks like we’re in for an exciting week on the NBC soap, so stay tuned! Here at CDL, we’ll keep you up to speed on all the latest Days of Our Lives spoilers, updates, and news.