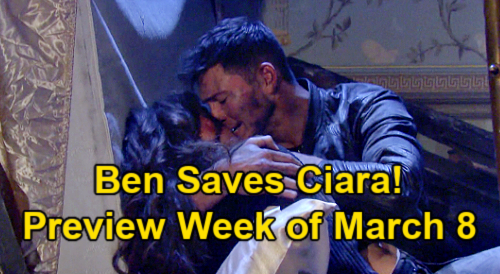 Days of Our Lives (DOOL) spoilers preview teases that viewers are in for a big week, March 8-12, on the NBC soap. The new DOOL preview for the week of March 8 is out, and it foreshadows a lot of great action, including some possibly burgeoning feelings, a long-awaited reunion, and plans for a very special wedding. There’s a lot to unpack in this preview, so let’s get right to it!

First off, Brady Black (Eric Martsolf) is shown with Chloe Lane (Nadia Bjorlin) having an intimate dinner together at the Brady Pub. It seems that Chloe once again is developing feelings for Brady, which is a big problem since Kristen DiMera (Stacy Haiduk) is back on the scene and pretending to be Susan Banks (Stacy Haiduk).

Well, Kristen happens to be nowhere in sight as Brady and Chloe are dining at the pub, and Chloe is heard telling Brady that they would be good together. Brady and Chloe seem to be gazing at one another with love in their eyes, and it’s all a recipe for disaster when and if Kristen finds out about what’s going on here. 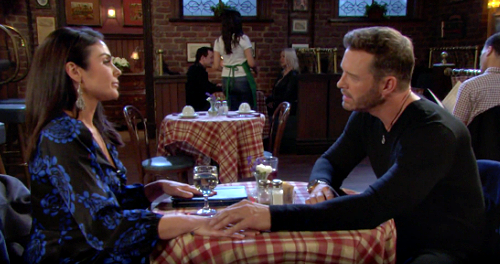 It looks like there will be some very tense moments, since Days of Our Lives spoilers indicate that Shawn Brady (Brandon Beemer) and Ben will track down Evan Frears aka Christian Maddox (Brock Kelly), therefore tracking down Ciara.

But things are going to get scary when Ciara tries to get out of her enclosed room and she ends up hitting a gas line, which could put her and everyone else in jeopardy.

We’ll see exactly how it all turns out, but the bottom line is that Ben is shown in the preview holding Ciara and telling his love that he’s there. It should be an emotional scene for sure.

Finally, the new DOOL preview video shows Xander Kiriakis (Paul Telfer) preparing for his upcoming wedding to Sarah Horton (Linsey Godfrey). Xander doesn’t exactly have loads of friends to help him celebrate the hours leading up to the wedding, but he will have his pal Jack Deveraux (Matthew Ashford) to help him out.

Xander and Jack are shown walking into the Brady Pub with Xander bellowing out, “It’s my big fat Greek wedding!”

And then Xander is shown telling Jack that he needs a best man. “I’ll do it!” Jack says enthusiastically, with Xander reacting by giving him a big bear hug. It looks like we’ll see some good male bonding for sure!

Interestingly, Days of Our Lives spoilers say that Xander’s little two-man bachelor party with Jack will get interrupted when Rex Brady (Kyle Lowder) returns to Salem and crashes the whole thing.

Of course, since Rex is Sarah’s ex, that could lead to some tense, and possibly even some comical, scenes. We’ll see exactly why Rex has returned and what he has in store for this wedding.

It looks like we’re in for an exciting week, so stay tuned! We’ll give you updates as DOOL news comes in. Stick with the NBC soap and don’t forget to check CDL frequently for the latest Days of Our Lives spoilers, updates, and news.