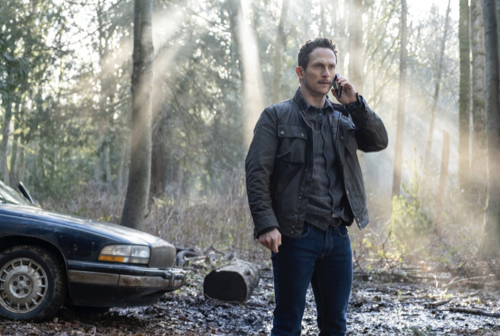 Tonight on NBC their new Sci-Fi drama Debris airs with an all-new Monday, April 5, 2021, episode and we have your Debris recap below. On tonight’s Debris Season 1, episode 6 called, “Supernova”,  as per the NBC synopsis, “When the team investigates a group of teenagers who are using debris to kill the elderly, Bryan faces increasing pressure from Maddox to get answers out of Finola.”

In tonight’s episode of Debris, the episode begins with two teenagers, the boy comes out of the house where it appears debris killed some elderly people. He goes back to his car where a girl is waiting for him and she asks “what do we do now?” and he says “we need more people.”

Finola and Bryan are on a plane together, she looks off to the distance and he asks her if she is ok. She says when they were in New York her sister sent her an old family video of them when they were kids and it made her think about her dad, he was in Greece the summer before he died and he told her that he found the perfect present for her to buy him for his birthday – she never had the chance to find out what it was.

When Bryan walks away, Finola calls Priya and tells her that she told Bryan the story about her father in Greece. Priya tells her that if it comes up again, tells him about Cyprus being there too. Finola asks who was the agent Finola sent to deliver the memory stick, she says the agent is dependable.

Finola and Bryan arrive at a crime scene, Tom tells them that a woman was walking her dog and she noticed some teenagers go in the house. Inside, there are three elderly people and they have been killed by debris sucking the life out of them. The three people are Bill Jarvan, 82 years old – M. Clarke, 87 years old and B. Skinner, 84 years old; they were all reported missing and at their ages, they could have barely made it through the forest alone.

Craig is with Anson, he asks him about Influx and wants to know who is funding him. Anson tells him that he doesn’t get to control this debris, it is a power so vast, a possibility of good and evil and you don’t know what side you are on. Craig tells Anson that he is a good guy trying to save the world.

Anson says he is just a guy that wants Moo Goo Guy Pan. Craig says they know he switched out George’s body from the morgue, he asks if he reanimated him with debris. Craig says there are no rules since their arrival. Craig tells him to get some sleep, next time he sees him he is going to need the energy.

Finola and Bryan are looking around the property of the house where the bodies were found. Bryan notices some trees are marked, but hikers do that sometimes so they don’t get lost. Craig calls Bryan and tells him that Georg was at a series of conferences in Romania just before his death, he needs him to find out if he was anywhere near the Meditarian, Cyprus. Bryan tells him that Finola said her father was in Greece. Craig wants to know how long he was there, and whatever else he can get.

Tom says they checked the dental records, the dead bodies are confirmed as the missing elderly people and there is a new missing person, Caspain Cole, 80 years old.

We see the same two young teenagers that were in the car, they are meeting up with another boy who gives the boy a weapon that looks like a machine gun, but is a piece of debris – he tells her they are on track, they just need to find more.

Finola has been sent a video of another missing man, Jose Manza, 90 years old and he was talking to two teenagers before he went missing. Tom calls Bryan, they found a car in the woods. They pop the trunk and find some of the victim’s clothes. Bryan gets a call, they are in Finola’s apartment and need her password for her computer, he says they are on their own.

The boy sits with an older man named Subash near the lake, he says sometimes he thinks his family is just waiting for him to die. The boy says I can help you with that.

Bryan is in the car with Finola, he brings up the story that she told him in the plane, he says it stuck with him. He says people said her father was this hyper-focused genius that was out there. She tells him that he did papers on children’s nightmares, he was obsessed with neurological computers. He says everything he heard, he doesn’t sound like someone that would just jet off to Greece. She says, and Cyprus, he was there too.

She asks him why he is asking her about her father. He tells her that he is alive. She says she knows and she knows that he and Maddox knew. She asks what he knows about it. They saw him coming into JFK and Maddox is trying to rule out that he is a clone. She asks her if he died or not. She says she saw his body. Maddox wanted him to get information about his trip to Greece to see if Influx was tracking before his death. That is all he knows. He asks her if he can trust her with what he told her. She gets out of the car and says nothing.

The groups of teenagers are walking in the forest with Subash when they hear sirens. The boy gives Subash the debris and tells him to hold on, no matter what. Bryan catches one of the kids. Meanwhile, Subash lost a lot of years, he has turned into a young man. It appears that when these older people hold the debris, they turn young, shaving maybe 60 years off their lives. But the glitch is, they have to remain together. Caspian was caught and separated, he ages right in front of Finola.

If they are on the outer regions of being too far from the debris, they will die. Kurt is the ring leader, Bryan finds one of their walkie-talkies and calls him. Bryan tells him Jose is dead and what he is doing is wrong. Bryan tells him that they found the bodies in the house and more people are going to die. Kurt and Clara were married, she had dementia and he got his wife back – this is how this all started with him.

Bryan calls Kurt, he tells him that he can’t help him. Kurt says he will disappear and they will never see him and Clara again, and the others deaths will be on him. Kurt says he found the debris near some cliffs behind his house, and he saved his wife. Kurt is smart, he related the walkies so Bryan couldn’t find him and Clara.

She tells him they have to stop, he says he can’t live without her and this was a gift given to them. She tells him that they have already had their gift, a life with each other. He is afraid if she goes back, she will die the next day and forget to wait for him.

Kurt left the debris, he and Clara walk away. They have chosen to walk away and die together, now. A hazmat team picks up the piece of debris. Bryan is in the woods looking for them and finds the backpack that Kurt was holding.

Maddox is with Irina, she has a briefcase with another piece of debris. She wants to know why he wants this communication frequency, he says because it works.

Bryan and Finola are back in the car together, she tells him that he can trust her, she knows it wasn’t easy for him to tell her about his orders.

She says she can’t trust Ferris and he can’t trust Maddox, there is something going on that neither of them understands. He tells her that they are going through her apartment.

They traced the calls that came from Anson Ash’s phone, they are from Maine.