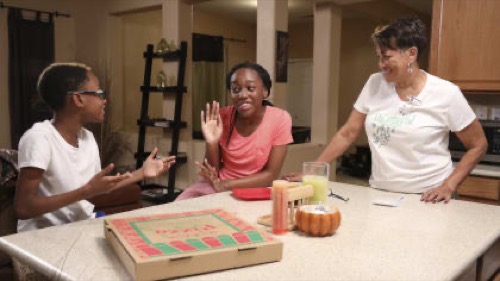 In tonight’s DDWTD episode, The happy couple are pregnant again. However, not everyone was happy about that. Deon’s mother was upset because she wanted to know when was going to be enough for them and they couldn’t give her a clear answer. They have fourteen children. They were currently pregnant with their fifteenth and they were having a hard enough time with the children they have now. Even entertaining all those kids were hard and the new dog hasn’t helped. The new dog brought out Deon’s OCD tendencies. He is a neat freak and seeing the dog’s fecal matter can set him off. He actually cordoned off an area because the dog poops in that area. He told his kids to treat that area like covid.

Deon was still upset by his mother’s reaction. He felt she crossed her line with the things she said because she demanded to know when they will enough children and when they’ll put that side of their life away. It’s like they weren’t even trying to not get pregnant. They just opened themselves to risk and whatever will be will be. Which is hard for GG. She wants her son to have a plan and to stick with the plan of when it will end. GG hates that she lost her temper with him. She went back over to his house and he told her that the pregnancy has been confirmed. He also told her that he doesn’t know when it’s going to end because he’s taking that from the bible. The Old Testament told him to go forth and multiply. And so they won’t stop until God makes them stop.

GG doesn’t like that. She doesn’t go back to the Old Testament because that was written before Jesus and so she tried to tell her son to focus on the New Testament but he didn’t want to. Deon wants to focus on the parts that he can use to justify his actions. He’ll always believe that he will have his mother in his life and that his kids will have their GG. Only GG is getting older. She isn’t as healthy as she used to be and it’s harder on her to keep up with babies every other year. She wasn’t invincible. She was getting sicker the older she gets and even moving nearer to the family won’t be enough because she wouldn’t be able to help with all the children they’re planning to have. And in spite of how she felt, GG didn’t say anything to anyone else about the new baby.

The eldest daughter figured out Karen was pregnant. She asked GG about it and GG played dumb because she said it wasn’t her place. It was up to the little girl’s parents to deliver the news. But most of the older kids have suspicions. They noticed Karen hasn’t been feeling well and that she’s been acting differently. They also could see that Karen was dealing with something. Karen’s grandmother Meme was sick. She’s had back-to-back strokes and her time was coming. One of Karen’s cousins called to tell her that Meme’s condition has taken a turn for the worse, but Karen couldn’t visit her because she was in her first trimester and she wanted to wait until she spoke with a doctor before she figured it was safe enough to travel.

Unfortunately, Meme passed away before Karen could visit her. Karen had a tough time dealing with that because she heard her grandmother was death’s door and she passed away less than three days later. Karen gave herself a good cry. She didn’t let her kids see it because she didn’t want to frighten them and so she waited until she was composed before she came outside to break the news to her children. Karen’s spirits did lift when she went to the doctor for her first prenatal check. They went in alone because covid restrictions meant the cameras couldn’t follow them and so sadly the appointment didn’t go as planned. They found the sac where the baby was supposed to be but the baby wasn’t there. Karen wasn’t going to have a baby.

Or at least that’s what she thought at first. The nurse who didn’t find the baby in the sac had thought she miscarried and so it had taken a doctor looking at it to determine it was too soon to find the baby. Karen has to go back in next week for another ultrasound. Her grandmother’s spirit is looking out for her and Karen remains hopeful. She’s sleeping when she should. She’s eating more than usual and Darian noticed it. Darian got her father alone. She asked him if her mother was pregnant and he confirmed she was. Deon didn’t go into details about everything they feared could happen or that they needed another ultrasound. He just told her there was going to be a baby and she got so excited.

Darian couldn’t wait for another baby. She wanted to be the one to name him or her because she missed her last chance when her parents turned down the name she picked up and so it was all about getting that second chance. Darian was celebrating while GG was still trying to wrap her head around a new child joining the family. GG later told her son and Karen that they should go straight to bed instead of making new babies. GG you see wants to make to a point that when the kids all become independent enough, its great because they can all door more. GG is just trying to get to that point with no new babies coming in and she struck down what Deon was saying about how she can always take a break.

GG is never going to sit back as she watches the family struggle with the babies. But also finding more childcare is going to be impossible for the expectant couple and so they have to accept GG’s help. And GG’s help comes with words of advice.