Doubling Down With the Derricos Recap 06/29/21: Season 2 Episode 5 “Unexpected Ultimatum” 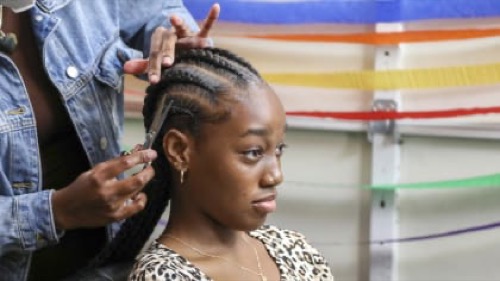 In tonight’s DDWTD episode, the Christmas season is upon them. Deon brought out the Christmas tree and he and the kids decorated it with candy canes. The family learned the hard way that it was better not to use real ornaments. The real ones were breakable and dangerous. The candy canes were different because if they break then the kids can eat them. Deon did this with the children to help take their minds off of Diez. Diez was informed that he needed surgery.

He and his brother Dior were with Karen and her friend Washeka. They were heading back home now. Karen dropped off her friend and she drove the rest of the way home with her two babies. Karen was sorely missed because those kids ganged up on her the moment they saw her.

They even wrote a song about her. The song was about giving her kisses and hugs. Which they did. The kids also looked forward to playing with their mom because their mom allowed them to play with chalk and be their messy selves and Poppy doesn’t like any of it. Deon has OCD. He hates mess and just the thought about feces. It’s why he doesn’t like the new dog. Deon likes everything to be neat and it’s why he looked forward to the nanny.

He asked around and Sally the nanny was suggested to him. She came highly recommended. She could start soon and so the only problem with hiring her is Karen. Karen is not ready for a nanny. She’s been through a lot with Diez’s doctor appointment and with her recent miscarriage.

They hadn’t even told GG their news. The couple later informed GG that they miscarried their new baby and GG sympathized with them because she has a miscarriage herself. She knows that it leaves you feeling a type of way. Karen also admitted that she thought that time of her life was over. Her last miscarriage was eleven years ago and in that time she had about twelve kids. She thought multiples were her future.

She didn’t think she would lose another child and so this miscarriage really hitting her hard. Karen still tried to get enthusiastic about the nanny. She contacted Sally. She interviewed her and her fears didn’t really go away. Karen only really trusts her kids to be around family. It was how she was raised. It’s how she wants to raise them and so she doesn’t want a nanny.

The family was also celebrating a birthday during the Christmas season. It was Darian’s birthday. The teenager was getting older and that’s never been more true than when she told her dad she wants a boyfriend. She said all of her friends have one. She wasn’t the only one who wasn’t booed up and she wanted one now too.

Her father was against the idea. He told her that she would have plenty of time for that down the road and that now was the time to focus on school work and sports. Only it didn’t change Darian’s mind. She wants a boyfriend. She saw everyone else get asked out but her and so it stung. She wants a boyfriend. Her mother later talked to her about it and she confirmed everything Deon said. Darian has all the time in the world for boys. She shouldn’t be in a hurry to get one.

The family does something special for Darian’s birthday so that her birthday doesn’t get wrapped up in Christmas and so that it could remain special. Darian asked to go go-cart racing. She was coming close to driving age and so Deon thought that would be a great experience for her. Darian’s best friend also showed up to play with them. They had fun on the course. They also enjoyed the time off of the course. Darian met someone. She met a guy.

Darian didn’t get her trip to the mall. She instead went shopping with GG and they picked out a cute outfit to wear for her birthday. Darian loves her time with GG. She loves how special GG makes her feel and GG does that with all of them. She spends one on one time with them. She gets a sense of their likes and dislikes and they also play. GG never lets them win though. She plays to win and so they enjoy it more when they defeat on their own.

The kids later did a gingerbread building game. They wanted to start a new tradition and the adults hated it because of all the work. GG casually mentioned that it would be easier once Sally comes in because then Sally could do this with them. Which set off Karen. Karen doesn’t want another woman having these moments with her babies.

o share her kids with an outsider. She didn’t want the nanny and she was still standing against it but Deon gave an ultimatum. He said either she helps find a nanny or he was going to hire one himself. The couple needs a nanny. Their mothers were getting up there in age and GG for one doesn’t have it like she would in the past. She gets tired easily. She needs to be able to step back and the couple needs to find someone who could help them with their kids.