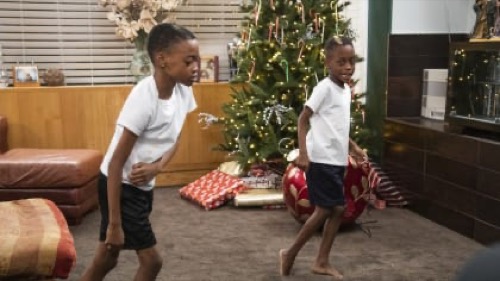 The episode begins with the Christmas season. The family loves this season. They celebrate in so many ways that they end up doing a little of everything and so up first was gingerbread houses. They made gingerbread houses. They’re now working the Christmas countdown. The countdown is when they create links and added new ones for each new day before Christmas. Their kids love the countdown. They love everything about the season because they love the inclusion and the togetherness they celebrate. The kids also exchanged names to see who was getting a gift and a few people asked the corona to be over. But all lightness aside, there was still the issue of Diez’s surgery. Diez’s head needed to be reshaped and so his father Deon wanted everyone to be there to greet him when he comes back home.

There was just one issue. The house was beginning to feel small. They were a family of sixteen and so Deon wanted to renovate the house. He’s been saving money. They haven’t taken any vacations lately and Deon thought he’d be able to renovate the house with what they saved, but unfortunately, they received news that put a dent in their savings. It was Diez’s surgery. He was having it out of town and the family wanted to be all together and so they looked for rentals to accommodate them for like a week only to be told that it would cost over forty thousand dollars. It would cost that much to accommodate eighteen people. It was so downright expensive that both Karen and Deon discussed it and they wondered if it would be better to leave behind some of the family.

Karen took the girls on a shopping trip. They bought presents for whosever name they picked and they were told to stay away from slime. Deon’s OCD wouldn’t be able to handle slime. His wife knew that and so she made the girls put the slime back. Later, it was Deon’s turn to take the boys shopping. His OCD was a full-on display when he told the kids not to touch everything because you never know who else might have touched it. Deon helped the boys buy their gifts. He also assisted his wife in finding a cheaper rental. Karen kept looking and she found a place for three grand and not forty grand. The cheaper place would allow the family to stay together. It also would give them time to renovate the house if they felt like it.

Deon was interested in a renovation. Only he didn’t think he could focus on it because there were so many other things to handle. Deon also wanted to hire a nanny. His mother couldn’t’ help with the kids as much because she was losing her breath simply by walking from point A to point B. GG was losing her edge. Her son was worried about her and he made her see a doctor. GG was later told by the doctor that she wasn’t going to get any better. She was old and she was fragile. She was also going to get weaker by the minute and not better. GG was diagnosed with lung cancer some years ago and she fully recovered but seeing her struggling and being told it was emphysema had Deon genuinely scared. He doesn’t want to lose his mom.

Deon doesn’t want to overburden by her trying to keep up with the children. He knows they need a nanny and so he issued his wife Karen an ultimatum. He told Karen that he would hire a nanny if she doesn’t get on it and he had seemed serious this time. Deon had wanted to take the load off his mother. He set out to find a nanny and unfortunately he pushed it in the back of his mind because he got caught up with the other things. The other things like the renovation. Deon wants to do some minor renovations with everyone out of the house. He was going to do it when everyone left to be there with Diez during his surgery. Another thing that came up was Christmas. Christmas morning was loud and crazy with fourteen children.

The gift exchange worked out great. All the kids loved the gifts they got and the adults loved seeing all the happy faces. Christmas Day was just an outpouring of love. Everyone partook of it and they loved how happy the kids were. Deon’s friend Eric also stepped up unexpectedly. He heard they were looking for a nanny and he wanted to help fill that role. Eric was an honorary uncle to the kids. They greatly respect him. He’s like the older brother they’ve all wished they had and so the nanny situation was resolved. They have Eric. They can find someone else to take his place in the business with Deon and what’s great about this decision is that Eric isn’t a stranger. He was family. The family watching family was the best way to do things.

Eric also was grateful for the chance to experience this. He didn’t get that in childhood and so now he’s making up for it.