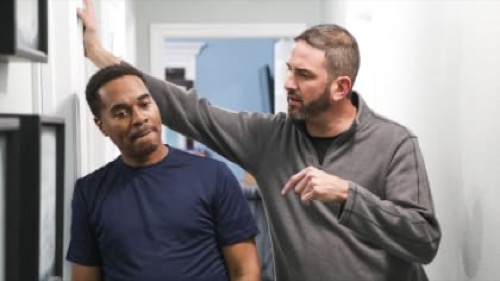 In tonight’s DDWTD episode, Deon and Karen told the kids about Diez’s condition. Diez’s head shape wasn’t developing properly and he needed surgery to fix it. The surgery will be cutting into his skull. The doctors will then reshape the skull before they could put it back on and so the surgery was risky. The surgery was scary. The surgery also needed to be carefully explained to small children and so that’s what their parents did.

They explained things. They reassured their children and now everyone is prepared for the trip to LA. The family has to travel to LA for the surgery. The kids were all going along with their new nanny Eric and their parents and GG and so it’s a party of eighteen that’s going. They were renting a house while Deon was doing some renovations.

Deon was renovating their current house. He figured now would be the best time to do it with everyone in LA and so it brought in a project manager to oversee the project while he’s away. The project manager is a dear friend. He’s also a great realtor. He also knows that the family wasn’t planning on staying at that house and it was the pandemic that forced them to stay. Now they’re renovating the living room as well as the master bedroom. Deon and Karen were giving the bedroom to the boys. It was big enough for everyone’s bunk bed and it would also give them extra space to branch out. It was the perfect solution to a house that could no longer fit everything they need.

Only packing for their trip to LA was horrible. Everyone just wanted to shove their things in the back and Deon had to pack things carefully. He has OCD. He has to do things with a method in mind and he also didn’t want to get stuck unloading the car just to look for things he needed on the road. The family took two vehicles to LA just so that everyone fit and all their things. It took them nine hours to travel from Las Vegas to LA.

They had to stop to change diapers and to have bathroom breaks. Deon said they could fly there and come back in the amount of time it took them to make a four-hour trip. They got there. They unpacked and sorted out who got which bedroom. Darian stayed with the quint girls.

She really wanted to stay with her grandma but she allowed someone else the chance to stay with GG. The kids love their GG. GG’s health is at a precarious stage right now. She was diagnosed with emphysema. She’s getting older and more tired and so Karen and Deon don’t want to put too much on her plate. They wanted to give a GG break. It’s why they hired the nanny or in their case the manny. Eric was their nanny.

He watched the kids and that gave the other some time to relax. The kids love Eric. They love playing with him and having him help them with their homework and so it was a perfect fit for everyone. The kids also loved being at the new house because they were in need of a family vacation.

The kids didn’t see the downside to their rental. Their rental was all pretty in pictures and bougie in real life. Neither Karen nor Deon was happy with it. They went looking for a new rental and found one that looked better in person. They also took the kids to the beach. Karen took Diez and his twin brother Dior to the beach when they last visited LA for Diez’s surgical consultant. This time she got to take all the kids and they loved the beach.

They loved wading into the water. They loved the beach. It took their minds off of the reason why they’re really there. They’re there for Diez’s surgery. Karen and Deon had another follow-up with the doctor and they were told that the surgery was like a jigsaw puzzle.

The doctor was putting the right puzzle pieces together to give Diez a whole new shape to his head. There were risks of course because it was removing someone’s skull and so the family prayed multiple times before the big day. Deon and Karen got up early in the morning. They woke up Diez and they took him to the hospital. Diez looked a little nervous because he’s never far away from his twin brother if he could help it. Diez and Dior are always together.

They feel sadness when the other isn’t there when they wake up and so the rest of the family will be there for Dior while Deon and Karen will be there for Diez. Karen cried on the way to the hospital. She tried to be strong in front of the kids but on the inside, she was a frightened mother.

The hospital later told the couple that only one parent could go in. The couple discussed it and they decided that Karen should be with Diez. Deon had to return to the car due to safety regulations at the hospital and it got worse from there. Diez would be moved to the ICU after his surgery.

And poor Diez had to go into surgery alone and he hadn’t liked that. He started to cry and no one could get him to stop because he wanted his daddy.