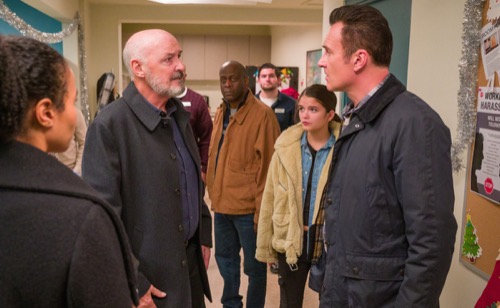 In tonight’s FBI Most Wanted episode, LaCroix was at the mall doing some last minute holiday shopping. He was with his family and by coincidence he ran into Barnes. Barnes was doing some shopping as well. She was looking for a specific toy for her daughter and that toy seemed to be sold out everywhere.

But she and her wife were still trying to find the toy. Barnes’s wife had to leave early and so she was the first to leave the group as the others were catching up. They were discussing LaCroix’s daughter getting into boarding school when they first began to hear the gun shots. There were shooters in the mall and thankfully both Barnes and LaCroix had their weapons. They just had to secure the civilians first. LaCroix had his family hide.

They did so. But it was hard because they saw the gunmen come around hunting people and the gunmen were wearing full body armor. They also had semi-automatic weapons. LaCroix couldn’t risk his family by confronting the gunmen. He had to protect them first. He and Barnes tried to get out of the mall through one of the exits and unfortunately it was blocked off. It seems the gunmen made sure to block off the exits to keep everyone trapped inside.

Barnes managed to get a couple of calls out. She called the rest of the team to fill them in about the situation and she also tried to call her wife. Her wife wasn’t answering. She didn’t know if her wife got out of the mall in time before the shooting happened

LaCroix and Barnes couldn’t hide forever. They knew that. They got his family and other survivors to a safe place in the mall. Afterwards, LaCroix and Barnes went back out with a retired Texan cop. They went looking for the shooters. They also helped people along the way and LaCroix’s father went with them. He didn’t have a weapon, but he was going to act as eyes and ears so that Barnes had some cover while she was out there.

It turns out someone cut the wires. Only the security cameras were new and so they still had the old one there. Hana talked Barnes into getting the cameras back up and running. She saw the footage from inside the mall. She was able to see that there were three shooters in all and that her wife didn’t get out in time.

Charlotte was still in the mall. She was a month away from her due date and she was doing her best to hide with a group of people. Barnes was worried about her wife. She wanted to bring everything to a close and unfortunately there were several roadblocks. This terrorist attack was well-planned. The shooters rigged all the doors with explosives and if they were moved even just a little then one would go off and that would trigger to explode as well.

The only way into the mall was through the roof. Gaines went with the NYPD to enter through the rough while Ortiz pursued the inside man and there was an inside man. A guy who works at the mall helped his buddies plan this attack. Ortiz arrested the guy and he learned that the guy was in contact with the shooters inside.

They were even bragging to each other. They mentioned how they shoot one woman who liked the other’s ex-girlfriend. Ortiz identified himself on the walkie talkie. He said he was an FBI Special Agent. The person on the other hand then stopped talking and so Ortiz had to find out information another way. He searched the accomplice’s home. He found out there was five bombs instead of four.

Ortiz informed Hana of this. Hana then told the NYPD and there was no telling where the fifth bomb was located. But in the meantime, Barnes managed to find her way. She reassured her that they were handling everything and then she asked her wife to continue to hide.

Charlotte tried to do so but her water broke and so she needed urgent care. Barnes and LaCroix didn’t know about the situation as they went after the gunmen and they were later able to take out one of the shooters. They were also able to get a second one much later on. The two of them working together were able to get rid of the shooters but there was one problem remained and that was the fifth bomb. The fifth bomb was still out there and no one knew where it was located.

No one except the one guy that chose to stay home. He had the timers on the bomb on him and one of the bombs was set to explode in under three minutes. Ortiz questioned the suspect but all he would say is that the bomb was a failsafe and it was labeled “tomb”.

Neither Ortiz nor Hana knew what that meant while Barnes did. Barnes knows the tomb was the warehouse of old equipment hidden inside of the security office. She went back there with LaCroix and the retired cop. They cleared out the security guard. They managed to find the bomb and Linwood the returned cop then grabbed it and it got it to a place where it could explode safely. And Linwood was alright.

He woke up to see his son by his side. His son was NYPD and he made sure to be one of the first inside of the building because he knew his dad was still inside.

And later the mall was cleared, but Barnes’s day wasn’t over because her wife was giving birth in an ambulance and so the team stayed around long enough to find out it was boy and everyone was healthy.