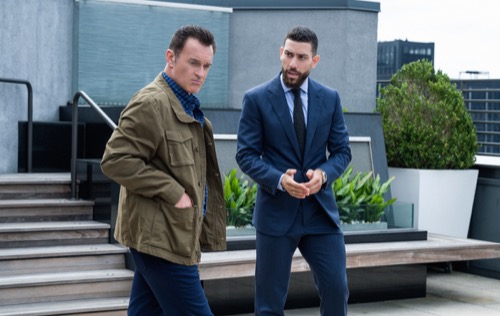 Tonight on CBS FBI Most Wanted airs with an all-new Tuesday, September 21, 2021 season 3 episode 1, “Exposed,” and we have your FBI Most Wanted recap below. In tonight’s FBI season 2 episode 15 as per the CBS synopsis, “A local FBI case involving two murdered women and a sea of powerful men turns into a manhunt for the dangerous leader of a far-reaching criminal enterprise.”

On tonight’s FBI Most Wanted episode, several months after the shooting at his home, La Croix was back at work. He and one of his agents were cleared in the shooting. It was considered a clean shot because the man that was killed was attempting to murder his ex-wife and LaCroix’s current girlfriend. But LaCroix’s return to service was fast-tracked because one of his agents had been shot.

Special Agent Crosby was shot while looking for a serial killer who had been in his unit in the army and that man was now involved in a pedophile ring. The ring was responsible for the death of three people. They also turned to a new hitman after the former one was arrested and the new guy was better equipped. LaCroix had just tracked him down when someone killed him.

Whoever killed their hitman made it off in a vehicle before he could be identified. There were witnesses and there was also another federal agent in the field. Special Agent Kristin Gaines was visiting from Miami. She had been tracking down the hitman. His name was Efraim Amit and he was a smuggler before he was a killer. He was smuggling either guns or drugs when Gaines started to investigate him.

She couldn’t prove anything and she followed him to New York trying to put together what he was up to. She, unfortunately, wasn’t able to stop him from murdering a fifteen-year-old trafficking victim, but she was there to see him get murdered by a different set of hitmen. Whoever was behind the deaths was cleaning up.

The hitmen were dying. This also connected to a much bigger issue. Human trafficking also had ties to the smuggling community and a whole set of hitmen at their back. The only lead that LaCroix’s team had into them was a secretary. The secretary was on the board as a trustee to a company that owns the vehicle that killed Amit.

The secretary was labeled as a secretary for several shell companies around the world and she was the sheep’s clothing. They later found her in an apartment of a trafficked teenager. She had been cleaning up evidence and the teenager was missing. The teenager was Sunny. She was a friend of the murdered teenager Julia and Julia had been worried about her because her dying words are that Sunny is in trouble.

Sunny’s apartment held her cell phone but no teenager. The apartment instead had Sunny’s roommate and the secretary Fiona. Fiona claimed not to have any idea about what’s going on. The roommate proved differently. She proved that Fiona was neck-deep in what was going on. She was trafficking teenagers. She was doing it for her boss Collin Kent the billionaire.

Kent was the one who has Sunny. Sunny was a favorite of his and in fact, the team found a video of him sleeping with the fifteen-year-old girl and Fiona joining in as a third party. This is what made Fiona talk. She didn’t want to go to jail so she turned on every rich man involved in the trafficking of teenagers and she even offered information on the crime scene that LaCroix himself came across.

LaCroix was chasing the hitmen when he found their latest victims. They killed four teenage prostitutes who were living on a yacht and being traded sex for drugs. Kent was trying to clean up anything connected to him. Kent uses underage girls to force men into “investing” with him. if they didn’t pay up, he would threaten them with footage and pictures of them sleeping with underage girls. Kent also had a secret apartment. One of his victims who didn’t even realize he was a victim had told the team about the apartment and so they went there but they were too late. Kent was gone. He ran off with Sunny. Sunny was one of his favorite girls and he also was set on her trading her for safe passage out of the states.

LaCroix managed to track Kent down to a house in the countryside. They went there and they were just short of catching him. Kent had fled the country. He was in the air and he still has Sunny with him. Kent had also shot one of the guys assisting him. The guy he shot had been his security specialist. He was also the guy that had all the blackmail material and so Kent made sure to grab all of that before he made a run for it. Kent was probably hoping to use the blackmail material to keep in style for the rest of his life now that he can no longer pretend to run an investment firm. He killed or has tried to kill everyone with connections to him and now he’s airborne. He could land anywhere and the LaCroix’s team wouldn’t be able to catch him.

They would have to leave that part up to the FBI’s International division.