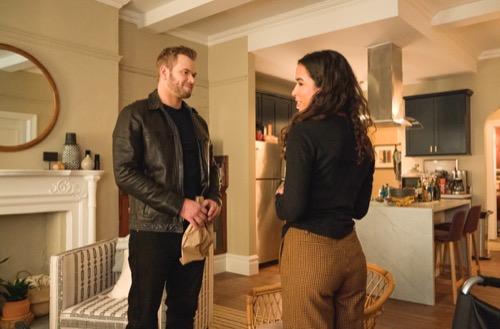 Tonight on CBS FBI Most Wanted airs with an all-new Tuesday, January 26, 2021, season 2 episode 6, “Dysfunction and we have your FBI Most Wanted recap below. In tonight’s FBI season 2 episode 6 as per the CBS synopsis, “After a robbery gone wrong ends with a murder and kidnapping, the team races to rescue a mother and daughter whose abductors are not what they seem. Also, Crosby enters a new living arrangement.”

In tonight’s episode, a home invasion didn’t go as planned. Two ex-cons broke into the home of Jack Cartwright because they were told in advance that there was money at his home and that’s not what they found. Cartwright told them he didn’t have money at the house. He gave them everything he could and they shot him because they thought he was lying about the money. The ex-cons did the same thing when they received the same answer from Cartwright’s teenage son Eric.

They next asked the wife and she told them the same thing. She said there wasn’t any money in the house. However, she could access their bank accounts using the laptop. She was desperate at that point because she didn’t want the men to kill her or her daughter and so she convinced them to take them with them.

Samuel Rutledge and his partner Peter Timmons have killed two people. They’ve also violated their parole and kidnapped both Amelia Cartwright and her daughter Gracie. They did the latter part because Amelia told them that she could get money from the bank the next morning. She had to put in the request and her life and that of her child is now resting on the fact she told the ex-cons she could deliver the money.

They were desperate at this point. Their original plan got scrapped when they didn’t get what they wanted from the house and so it’s a good thing a neighbor noticed a disturbance at the house. The police were alerted and the FBI was notified the second they realized it was a kidnapping.

LaCroix’s team was assigned this case. They knew they were looking for Rutledge and Timmons. They got fingerprints from the scene of the crime and both men shared a parole officer. Barry Sands was willing to talk to the feds and he was astonished by what Timmons did. Timmons wasn’t the type while Rutledge was. Rutledge was violent. His killing people was not surprising and so Timmons was the one that the team chose to focus on.

They went to where he was staying. He was living out of a motel room and he was eating takeout. The team also found several surveillance photos of another woman and they later identified that woman as Linda Carroll. She was Timmons’s ex-wife.

Carroll has no bad blood with her ex-husband. She did divorce him when he went to prison and then she later spoke up for him at his parole hearing. She told the board that he wasn’t violent. Carroll now believes she caused all of this with what she did and so LaCroix posted some police outside of her house. It was a good decision.

It most likely saved her life because Rutledge and Timmons did drive by her home and they sped away before the police even noticed them. Rutledge wasn’t happy to see the police there. It had been Timmons’s idea to rob the Cartwright home and it was also his idea to “visit” his ex-wife. He struck out with both decisions. Rutledge no longer trusts him and he wants to kill the mother and her child.

Which was a problem for Timmons. Timmons had a secret as it turns out. He was the father of Amelia’s daughter and so he didn’t really kidnap them just to kidnap them. He was running away with his family. He and Amelia met while he was in prison. This was on track for her because she had a thing for the bad boys growing up and she was known a problem. Amelia grew up with an alcoholic father.

She saw a boy died when she was in her teens and she fell into a depression that she never really left until she had her daughter. Amelia was messed up before she met she even met Timmons. It’s probably why she fell into a relationship with him. She was a teacher at the school and he received one on one private poetry lessons from her.

Both Amelia and Timmons arranged for Rutledge to murder her husband as well as her stepson. They were also going to steal money from Timmons’s ex-wife and that part of the plan fell through. Amelia and Timmons were stringing Rutledge with this whole bank thing. It was just to buy them time.

Rutledge realized it and so they took care of him. They lured him out alone and then Timmons hacked him in the belly with an ax while Amelia finished him off with his own gun. This was their plan all along. It was more Amelia’s plan than Timmons’s because he was just going along with whatever she demanded and so Amelia was the mastermind. Even the traumatic event from her childhood wasn’t as bad as everyone feared.

David Collins survived the accident on the bridge. He lost his football scholarship after Amelia dared him to jump off a bridge to prove he truly loved her and he still loves her to this day. Amelia has this power over men. She gets them to do whatever she wants no matter how badly she treats them and David wasn’t any different.

David wasn’t at home when the federal agents went looking. He had collected the money from Timmons’s old hiding spot. He also gave Amelia and her family a place to stay. He gave them the use of his parents’ old lake house. David met up with them later on with the money and a car. He was going to give Amelia everything she needed to flee and so Amelia had plans that Timmons didn’t even know about.

LaCroix found out about it all. They went to the lake house and they found all three adults plus little Gracie. The team secured Gracie first, but then they arrested the adults, and Amelia’s full plan was revealed. She was never going to leave with Timmons or David. It was always going to be just her and her daughter. The only man Amelia ever really wanted was her father and he never put her before booze.

Amelia’s men became disillusioned once they heard her full plan and they willingly turned themselves. Only Amelia was different. She fought back and she shot Hana. It was a serious wound. She’ll probably just need to rest it while it heals for the next few weeks and so she was going home. She was going home to her parents where she was choosing to heal up.

Amelia however was arrested and she faces life in prison. And so her daughter might end up going to her parents.