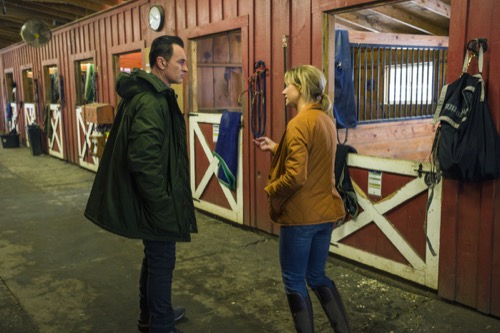 Jess tries to move past the awkward exchange he had with Sarah during their last encounter.”

In tonight’s FBI: Most Wanted episode in the suburbs, a little boy heads out to play. His mother and her boys cook breakfast. The boyfriend seems so loving and then stabs her in the neck. He heads outside, taking the boy for a ride to the “store.” Inside, the mother crawls to the phone. She manages to grab a device and pushes the button before falling unconscious.

Jess talks to Tali’s riding teacher about buying a horse. He apologizes for asking her out and making it uncomfortable. She tells him he asked and she got nervous. She tells him to ask her again. He does. She accepts.

Agent Ortiz is introduced to the team. Jess, Sheryll, and Ken get moving on a new case that just rolled in. An Amber Alert and two dead females, a mother and a grandmother. Samuel Smith is their possible suspect. He could be a sexual predator. They all head to Maine to work the case.

At the scene of the crime, Sheryll and Jess look around. They find bench seats taken out of a boat. Ken calls to tell them a cop pulled Samuel’s juvie file years back. They visit the cop. He tells them about a boy Samuel tutored. The man died in the woods but even the mom thought Samuel had something to do with it. Meanwhile, Samuel tells Caleb the young boy he will be keeping him. His mom doesn’t love him anymore. He gives him two glasses of O.J. The boy is sleepy right away.

Jess and Ken visit the mom and dad who lost their son. They ask about Samuel. Across the state, Samuel puts Caleb in a compartment in the ground out in the woods, saying a prayer before burying him.

The team heads to Samuel’s work and asks his boss about him. The employer tells him how great Sam is.

The team goes through footage and inventory at the store where Samuel worked. He stole 20 oxygen tanks, shovels and more. They also learn that Samuel has a partner. Judging by the tanks and the time, they have 30 hours.

The team approaches Samuel’s partner. He tries to run. Ortiz takes him down. He admits he lent Samuel a boat for pictures of minors. They force him to call Samuel. They make plans to meet. The team heads there and waits. When Samuel arrives they surround him but he jumps, killing himself.

They check his body and find his phone and some clues. They head to a house of interest. They charge in thinking they will find another partner in crime but Jess notices he looks like the boy who Samuel supposedly tutored and killed.

Jess was right. Daniel has been brainwashed. He thinks Samuel is his father. He tells him Samuel is dead. It is over, he is safe. He tells him how much his parents love him, his real parents. He works to get an idea of where Samuel likes to go in the woods. The team races to where they think Caleb is. They locate the compartment and dig. They pull him out and revive him.

Caleb wakes at the hospital with Ortiz and Sheryl by his side. His aunt and uncle are flying in to take him home with them. Meanwhile, Daniel is reunited with his parents. They cry and laugh after finally seeing their son alive and for the first time in 11 years.

Sheryll has been looking into Ortiz. He was rumored to have been on suspension after failing to tighten the cuffs of a purp. She learns he took the fall for an agent set to retire.