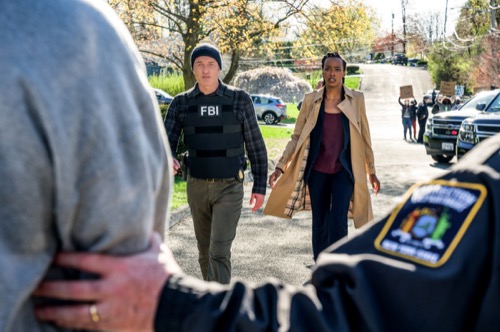 Tonight on CBS FBI Most Wanted airs with an all-new Tuesday, April 27, 2021 season 2 episode 11, “Obstruction,” and we have your FBI Most Wanted recap below. In tonight’s FBI season 2 episode 11 as per the CBS synopsis, “After a double murder takes place in a small town, the team goes after the vigilante who relies on internet sleuths to exact revenge on suspects in the name of justice; Jess and Sarah’s relationship continues to grow, but not everyone approves.”

In tonight’s FBI: Most Wanted episode, a woman who introduced herself as Claudia went on to murder both her hairdresser and the hairdresser’s boyfriend. She claimed she was doing it because the spirits told her to. This woman was armed with a gun, but she wasn’t afraid to get her hands dirty and to kill someone manually.

Claudia didn’t steal money from the business. She also didn’t bother to hide her identity. Claudia made the appointment in her real name and security footage from outside has her leaving the building at the time of the murder. Her full name is Claudia D’Ambrose. She knew enough to turn off her cell phone and she was seen buying several burner phones. Claudia was also seen heading to Maryland.

Claudia doesn’t have family in the area. LaCroix and his team spoke with her husband. Claudia has been married for fifteen years with no children and they tried having children. They were doing fertility treatments. Claudia became pregnant and sadly she miscarried that pregnancy. She lost the baby around the same time that one of her students had been murdered. Claudia was a music teacher.

The murdered student was identified as Anissa Gomez and she was supposed to be in school at choir practice instead of out in the woods with her boyfriend, but Claudia canceled choir practice for her fertility doctor and so she’s always blamed herself for what happened to Anissa and now she thinks she’s making it right.

The police released a sketch of the man they believed murdered Anissa and her boyfriend. The sketch had neighbors turning on neighbors and eventually someone named Danny and that was that. Danny was Jane the stylist’s boyfriend. Claudia killed him because she thought he murdered her student and it didn’t help that she was in the throes of a psychotic break.

Claudia has a family history of bipolar disorder. She usually takes weed to prevent certain symptoms, but she started to take THC since her miscarriage, and that plus grief was what led to the break. Claudia doesn’t just believe she’s getting revenge for a student. She’s mistakenly believed that Anissa was her daughter because the child she lost and Anissa died around the same time and so Claudia doesn’t know reality from fiction.

She was fired from her job. The principal noticed some worrying signs before the husband did and he didn’t want her around students in such a condition. Claudia is unstable. Claudia believed she avenged her “daughter’s” murder, but then word got out that Claudia killed the wrong man.

Danny didn’t kill Anissa. He just looks likes a sketch that could be anyone and the police know he didn’t kill her because they have the killer’s DNA. It just doesn’t match anyone in their system. The police released this information and so Claudia went looking for the real killer again. She logged back onto a forum set up in Anissa and Derek’s honor. And people there began pointing fingers at who else could the murder be.

One blogger seemed to be stirring the pot more than the others. He named a young couple in the area because they visited the park at the same time as Anissa and her boyfriend and Claudia used that tip to murder those two people. Only she again got it wrong. Or really the blogger got it wrong and so LaCroix’s team went looking for this blogger because every finger he points leads to a double homicide.

They soon found him by tracking his computer. Their blogger turned out to be Derek’s father. The man was still grieving and he didn’t think the police were doing enough. He kept trying to find someone to blame for his son’s murder. He even released footage from Anissa’s phone that day. He wanted to see if anyone recognized the voice.

Claudia listened to it. She knows that the voice is fake. She’s a music teacher and she asks her students to record themselves for homework. Claudia can tell when the voice is faked. She later confronted the sheriff at his house. She had a gun pointed at the sheriff’s daughter and she demanded to know the truth.

The sheriff told her that they did edit the murder’s voice. They did that because the Mayor ordered him to and he only did that because the voice on the phone sounds like his own son. The Mayor’s son was a troublemaker. He threw bricks through Danny’s sister’s window because he claimed she was sister to a pedophile, but the kid knew the truth. He went to school with Anissa and Derek and he was probably tracking them for a while before he found the right time to confront them.

Anissa was raped and strangled. Her boyfriend was shot to death. Claudia has been reliving their murders out with people she believed were the killers, but eventually, she grew tired of the guessing game and she confronted the footage she found of the supposed killer’s voice. The real killer’s voice belonged to that of a teenager. It belonged to Brian. Brian saw Anissa first and Anissa chose Derek.

Brian has been upset for months about this and he lost it after Derek canceled plans with him to be with Anissa. Claudia helped Brian hostage. She put a gun to his head and she made him tell the truth. She made him tell the truth on a live feed. Brian confessed to the murders and LaCroix’s team moved in before Claudia could kill him. She was arrested and so was Brian.

But LaCroix’s day wasn’t over. He returned to his girlfriend’s place to find it ransacked and her ring doorbell picked up who did it. It was her ex-husband, Hugh. LaCroix leads the cops into finding Hugh and he was promptly arrested.