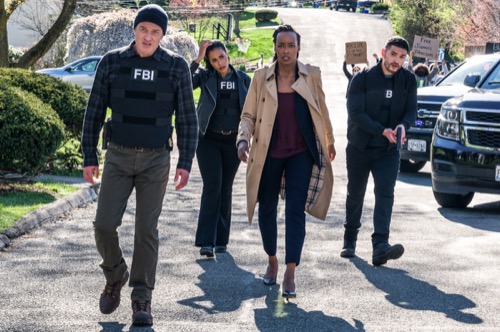 Tonight on CBS FBI Most Wanted airs with an all-new Tuesday, May 4, 2021 season 2 episode 12, “Criminal Justice,” and we have your FBI Most Wanted recap below. In tonight’s FBI season 2 episode 12 as per the CBS synopsis, “When a young man accidentally shoots a cop in self-defense and goes on the run, the team members find themselves in a moral dilemma on the best way to carry out justice; Barnes and her wife struggle with their plans to have another child.”

In tonight’s FBI Most Wanted episode, A homeowner heard a noise outside. He grabbed his gun and he went out there to check. However, he found someone spray-painting his car. The homeowner confronted the man with his gun and they got into a fight. The gun went off. It shot the homeowner and the other guy ran off with the gun. The guy who ran was James Johnson.

He was tagging Brian Granger’s car because Granger was a police officer who shot an unarmed black man and who wouldn’t have to face charges. The city brought in a special prosecutor to determine if they should press charges but the prosecutor chose to let Granger walk and that’ why Johnson wrote “Murderer” on Granger’s car. He felt someone should hold Granger responsible for what he did. Granger was the aggressor then and he was the aggressor again with Johnson.

Granger was the one who brought out the gun. He fired a warning shot and then left Johnson no chance to flee. Granger wanted a confrontation. He just never expected it would go down the way it did. Johnson didn’t mean to kill. He was genuinely scared for his life and so he fought back. The gun went off by accident. Johnson knew better than to stick around after killing a cop and that went especially for a cop upstate.

He knew he wouldn’t get a fair hearing. He went on the run and the media painted him as a vigilante. There were even celebrities that were coming out and they were all on Johnson’s side. Johnson soon found he had followers. He had people willing to help him evade the police and the FBI.

LaCroix’s team had been put on the case. Certain members of the team disagreed about what happened on the night of the shooting because some were calling Granger the aggressor and others were claiming that Johnson shouldn’t have run. Race and policing issues aside, the team had a hard time locating Johnson.

They thought he carjacked someone only for them to later learn that the young couple gave Johnson their car. They said what happened to him was wrong and that Granger’s death was karma. The couple was still arrested. They aided and abetted a wanted criminal and they’ll have a hard time explaining this one to their parents. Only the word had gotten out about Johnson.

Johnson was being painted an avenging hero. People were torching the special prosecutor’s car in Johnson’s name and Johnson himself was staying quiet. Johnson never set out to become a folk hero. He was just scared and he has no plan whatsoever. Johnson listened to the broadcast. The one the FBI did. The FBI told Johnson to get a lawyer and to come in. He followed their advice by contacting an important lawyer out of town.

This lawyer then built a law team for Johnson and Barnes’s wife Charlotte is on it. Charlotte later told her wife about her new assignment. Barnes became angry and she lashed out at her wife, but she didn’t mean it and she was quick to regret it. And Johnson released a statement.

Johnson shot a video of himself which he later released. The video details what happened from his side and how he never meant to harm anyone. Granger’s death was an accident. The death of Nasir Mills or George Floyd however were not. The cops have been killing unarmed black men for so long that Johnson couldn’t even remember all the names and so he said that in his statement.

He said he went to Granger’s home that night to remind him of the life he took. Nasir Mills was unarmed and he was handing his daughter his cell phone in the backseat. He was shot for that. He was killed for that and it was so unfair. Johnson’s legal team is building a defense for him. They’re pushing his story out there and Johnson mentioned his half-brother.

Johnson’s brother Charles was serving a prison sentence after wrongly being convicted. The only evidence that sent his brother to jail was the word of an undercover cop and that cop has since washed out of the NYPD. The team figured that Johnson would be heading to the former cop’s home.
Former Detective Jerry Solano lives in Queens. Johnson found him there and he brought company. Johnson met someone on the bus down. The two came up with a plan and they carried it out with Solano. They totally ignored everything else. Johnson was no longer worried about his legal troubles. He now just wants his brother to be released. Johnson was threatening to kill Solano if he didn’t see his brother and his new friend was acting as his mouthpiece.

LaCroix decided to give Johnson what he asked for. He was going to release Johnson’s brother on furlough and have him come down there so that they could talk. LaCroix wanted Charles to talk his brother into giving himself up. The FBI was prepared to take Johnson alive and they had called down Charlotte to talk to her client.

Everyone told Johnson to give himself up. He eventually did and he only did it because Charlotte agreed to represent his brother in a new trial. With Solano being dirty, they could finally combat the charges against Charles, and really that’s all Johnson wanted. He didn’t care about himself.

Charlotte meanwhile received a job offer and she’s going to take it as well as pursue fertility treatments with her wife.