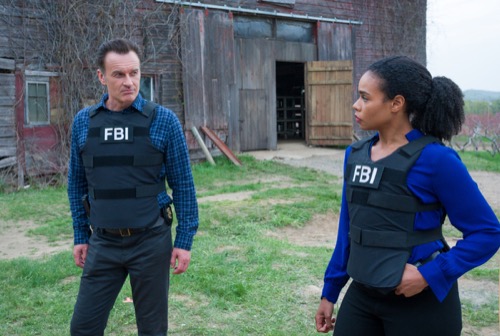 Tonight on CBS FBI Most Wanted airs with an all-new Tuesday, May 11, 2021 season 2 episode 13, “Toxic,” and we have your FBI Most Wanted recap below. In tonight’s FBI season 2 episode 13 as per the CBS synopsis, “The team tracks two brothers who are set on getting revenge against members of the company that caused their town’s environmental destruction; Sarah meets the rest of the LaCroix family, including Jess’ sister.”

In tonight’s FBI Most Wanted episode, a couple of truckers were taken, hostage. The married truckers identified as Teddy and Janice Burdette were later found murdered and their cargo was missing. The two were transporting electronics from different distributors. Each distributor needed to be contacted in order to get a correct tally of what was missing and even that wouldn’t tell the FBI everything because as it turns out Janice was known to be sticky-fingered.

She likes to steal. She also likes to cheat. She and her husband were picking up trips by undercutting other drivers and so there’s no telling who they might have ticked off. LaCroix’s team was brought in to investigate. They started by looking into the couple and they found Janice upset a lot of people while her husband was the unknown factor. And that could be why they were killed differently.

They were still investigating when another body dropped. This time a retired woman named Mary Strong had been tied to her chair and her tongue was cut out. The team had a lead at the time. They had surveillance footage from when the Burdette’s were murdered and they used facial recognition to identify one of the men in the video.

Greg used to work for them and he blew the whistle on them as well. Greg reported the dumping to his immediate supervisor Teddy. When that didn’t work, he went to Human Resources which was being run by Mary and so Greg was killing everyone who killed his daughter as well as gave his parents cancer. And his brother Wyatt was helping.

The team came to believe everyone connected to the toxic waste dump was in danger. They found out the whole town lost their lawsuit because Larry Griffin’s high-end attorneys claimed that the town was so sick because they had unhealthy eating habits and they brought cancer on to themselves. Larry Griffin even shut down the power plant rather than bring it up to code. He also stayed in town.

Larry opened a new business in his girlfriend’s name and it sells green cleaning products. The team later found evidence that the Hammond brothers had a bomb. The first place they thought the brothers would use the bomb would be on Larry’s new company and so they had the building cleared, but there was no bomb on-site and there was no sign of the brothers. Not even Greg’s wife knew where he was.

Only Larry did later receive a text. The text was from a burner cell and it had a picture of his daughter Julia in the trunk of the car. She had been kidnapped. Greg kidnapped her and it seems he and his brother were enacting different parts of the same plan. Greg kidnapped Julia while his brother Wyatt kidnapped another woman connected to Larry. She was married to someone who worked for him.

Wyatt kidnapped her and fitted her with the bomb and then he told her to go into an art gallery. He set off the bomb after she went inside. He killed everyone at the gallery and so the Hammonds were causing as much destruction as they possibly could. They wanted to punish Larry for dumping the toxic waste. They were especially angry that he got away it by claiming poor people lived a lifestyle that made them susceptible to cancer.

Wyatt and Greg were doing everything. They were murdering, kidnapping, bombing and all this to cause the maximum damage to Larry Griffin. Wyatt was later found before he could shoot up Griffin’s lawyers. He tried to shoot at the police officers and they returned fire. He was fatally wounded but he was questioned before he died and he gave them a clue on how to find Julia. Wyatt wrote the letter “v” in his own blood.

The team had no idea what it meant and so they tracked down everyone with a V last name or first name connected to the lawsuit. They then found someone who owns a farm that is isolated. This person was a great friend to the Hammond brothers and the team was moving with a quickness because they heard from Larry’s girlfriend. Larry had gotten a call and he went running out the door.

It turns out Larry got a call from Greg. He went to the barn where Greg told him to meet him and he saw his daughter tied to a chair. Larry begged for his daughter’s life, but Greg wasn’t really a killer. He wanted Larry to confess to dumping the toxic waste to his daughter and that’s what happened. The FBI moved in before anything else could be said but LaCroix later informed Larry that the EPA had been notified. The area where Larry dumped the toxic waste had been signed over to his daughter and he told his daughter to never build on that land or live on it yet he never told her why and so he gave the EPA permission to test the area. And they did find toxic waste.

Larry is now facing several charges and his lawyers can’t get him out of this one.

Also, LaCroix’s girlfriend Sarah had been too scared to live on her own and so his dad invited her to move in with them and she accepted.