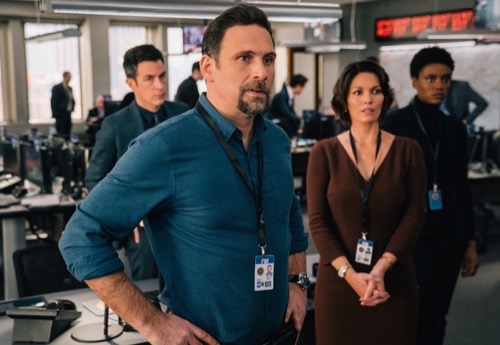 Tonight on CBS FBI airs with an all-new Tuesday, January 26, 2020, season 3 episode 5, “Clean Slate” and we have your FBI recap below. In tonight’s FBI season 3 episode 5 as per the CBS synopsis, “The team searches for a young girl who was kidnapped from a cabin during a family vacation; Maggie questions her relationship with Nestor when she learns he hasn’t been completely honest with her.”

Tonight’s episode of FBI open with Maggie’s new boyfriend having a secret. FBI Special Agent Nestor Vertiz seemed like the perfect guy on paper and for a while Maggie thought she knew everything about him. However, that all changed when she saw a photo of two kids on his phone. Maggie asked him if they were his niece and nephew. He told her “no”.

He explained they were his kids and they lived in Puerto Rico with their mom. Nestor doesn’t get to see his kids as much as he would like. He also didn’t bring them up before now because he wanted to make sure their relationship was further along before he mentioned them and so that upset Maggie because she felt she should have been told sooner. She ad Nestor were about to get into a fight about it when work called.

Maggie was called into work. There was a kidnapping in Upstate New York and time was critical in these sorts of cases. She was needed in the search for Grace Harris. The little girl is five years old. She lives in the Upper West Side with her parents who were both well-off and the kidnapping didn’t appear personal. The little girl was on vacation with her parents and aunt and uncle.

They were miles away from home and no one would follow them that far just to take their daughter. The FBI believed that it was someone in the area. They asked the family if they noticed anyone hanging around and the uncle remembered a white guy as he was getting wood for the fire. The team followed up on the uncle’s claims.

They found a white guy. His name was Don Kirkpatrick and he has a record. He was a drunk. He got so drunk recently that he broke into his ex-wife’s home to see their kids and she’s taken an order of protection against him. Kirkpartick was sober when the FBI found him. They questioned him and he said he had nothing to do with the kidnapping, but he did see a man dragging a little girl and the little girl didn’t want to go with him.

He did nothing about it and he told the team everything he knew. They followed Kirkpatrick’s directions to where he last saw the little girl. They found her doll near the river and there was also a rock with blood on it. The team feared the worst when they saw that. They put an order for divers and the river was checked for Gracie’s body.

They also tested the doll to see if they were fingerprints on it. The only fingerprints they found belonged to Grace and her father. Which was a problem. Her father’s fingerprints showed that he legally changed his name twelve years ago and that he had a sealed juvenile record. Ben apparently murdered a ten year old girl when he was twelve. He murdered her in the woods.

They both went to a camp in the Catskills and he lured her to edge where he pushed her off. He served six years at a juvenile center in the Bronx for what he did. His record was sealed when he turned eighteen and was released. He seems to have started over completely. He changed his name, he went to college, and now he’s a defense attorney.

But that record of his had the team worried. They believed he might have been triggered by this vacation because they were staying at a cabin in the woods and so he could have killed his daughter. He could have made it look like a kidnapper once he realized he was done. The team wanted to speak to Ben and he couldn’t be found. He also tried to run from them when he saw them, but it wasn’t for the reasons they thought.

He tried to run because he was given a ransom and he wanted to meet it. Ben was sent a photo of Grace with a demand of two hundred thousand dollars. He handed over the photo to the FBI Agents after they stopped him and that changed the nature of the case.

This was now a targeted kidnapping. Someone was targeting Ben by taking his daughter. The team also took it as a good sign that they were given proof of life because, as far as they could see, the child wasn’t harmed. She seems to have cut on her leg and that’s where the blood on the rock came from. Grace was otherwise fine. The kidnapper told Ben not to tell anyone and so that’s why he didn’t tell the FBI right away.

He also knew they suspected him. Ben said that what happened all those years ago wasn’t like the prosecutor said. Ben went to that camp on scholarship and girls like Lucky Parkin reminded him everyday that he wasn’t wanted there. He tried to go on walks to escape the taunting. Lucy followed him one day and all he did was shove her. He didn’t mean to shove her off the edge of that cliff.

Ben never meant to kill anyone. He just wanted to start over and he did. He went to college where he met his wife Rhonda and they got married and they had Grace. They also started great careers. Ben was happy until this. He told his wife about the ransom demand and both of them were worried. They were told not to involve the police and so they told the FBI they didn’t want their help.

Maggie still her number with them in case they changed their minds. She and her team didn’t just drop the case because of what the parents demanded. They checked out Ben’s life and they found a SNY electrical company van following him. They traced this van back to someone who works with the company and that person’s name is Ray Parkin.

Ray was Lucy’s brother. He kidnapped Grace because he blames Ben for ruining his life and he has a good reason to believe so. His family collapsed after his sister died. His mother committed suicide and Ray fell head first into drugs and alcohol. There was no telling what Ray would do to Grace in revenge for Lucy’s death. The FBI went to his home and they found his junkie roommate.

The roommate told them everything. He said Ray talked about his sister’s killer for years and that he saw him one day at court. He saw how Corbin Howard was now a hotshot attorney. He followed Ben and he began stalking him. There was a camera at the apartment full of photos of Ben’s family. The team were genuinely worried Ray might try to kill Grace and so they forced Ben to tell his wife about his past.

Ben didn’t want to do it. He only chose to do it because he knew the FBI would do it for him if he didn’t and so he finally told Rhonda this dark secret. He told her how it had all been an accident. He never meant to kill Lucy. He hasn’t seen her brother in over twenty years and still she blamed him. Rhonda was so upset that she snuck away and tried to meet the ransom demand on her own.

Maggie and OA heard her car as she was peeling away. They alerted the rest of their team and together they all tried to find Rhonda before she was killed. Rhonda didn’t understand how unstable Ray was. She went to that meeting and Ray pulled a gun on her. He never planned on returning the little girl. He asked Ben to be at the meeting because he wanted to kill Ben and so luckily the FBI were there to stop him from killing Rhonda.

They killed Ray. They also used their Crimes Against Children database to track down the hotel room from the proof of life photo and they didn’t find Grace at the hotel room. Ray had moved her. The team looked everywhere and they couldn’t find her at any of the locations that Ray had been scouting, but they did find her in the trunk of Ray’s roommate’s car. Grace was fine. She was found alive and she was later returned to her parents. There were going to be issues between Ben and Rhonda only there was hope for them and their family now that they’ve been reunited with their daughter.

Maggie later went on another date with Nestor and things ended with Maggie going back to her place alone. She just couldn’t understand why Nestor would hide such a big part of his life from her.