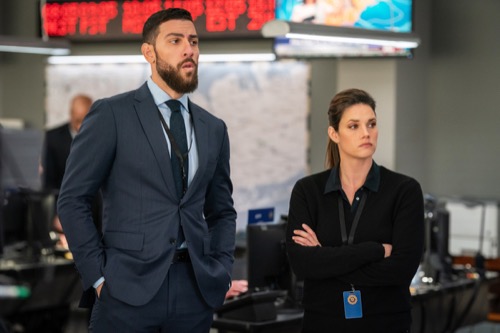 Tonight on CBS FBI airs with an all-new Tuesday, March 2, 2020, season 3 episode 7, “Discord” and we have your FBI recap below. In tonight’s FBI season 3 episode 7 as per the CBS synopsis, “The team hunts a killer who is fatally shooting seemingly unrelated targets; new agent Tiffany Wallace experiences tension between her work as an FBI agent and the responsibility she feels to her community as a Black woman.”

In tonight’s FBI episode, Tiffany and Scola are called to headquarters. Jubal updates the team about a congressman named Logan Reed who was shot in the head at his home. Scola, Tiffany, OA, and Maggie arrive at the scene. The gather came through the backyards of the neighborhood in a hoodie. Inside the home, OA and Maggie talk to Reed’s wife. She tells them about a protest that broke out in front of their home last week. It was mainly African Americans which surprised her because he was a minority advocate.

Back at the office, Jubal and the others try to figure out why the protest took place and why the protesting group thought Reed was a hypocrite. They run recent street video footage of those who have been protesting and see someone who is suspect by the last name of Thomas. Tiffany is upset the suspect of color was put on a watch list for breaking curfew. She feels like he was targeted. She heads out to find the man with Scola.

At a rally, Thomas refuses to come into the station. They cuff him and bring him in for questioning. Thomas has an alibi. The team learns of another shooting with the same MO as the Reed case. They learn it is the same shooter. Scola and Tiffany head to talk to the second victim’s mother. She tells them Marcus had no enemies but didn’t like the local police and the way they treated the neighborhood.

She guesses a cop killed him. Just days ago Marcus was beaten up by an off-duty cop. They call into headquarters. The IT team finds street footage of the incident and some plates of a car at the scene. The plate belongs to a career criminal and white nationalist with the last name of McGowan. The team works to locate him. Meanwhile, Scola and another female from the team get into a dispute that McGowan didn’t make the watch list but Thomas did. Jubal pulls Tiffany aside and tells her she was out of line.

OA and Maggie head to a local bar. They ask around for McGowan and find his mother before McGowan shows up. He sees them and runs. Back at headquarters, the team finally figures out the connection of the two victims to McGowan. Marcus testified against a fellow friend while Reed used some of the cases in his election videos.

Out looking for McGowan, OA and Maggie locate him. He runs again bringing them on a wild chase until Scola and Tiffany corner him. They take him in. While questioning him another murder occurs. Jubal comes to tell OA and Maggie. They realize the real murderer is still on the loose.

Scola and Tiffany head to the scene and ask witnesses about this latest murder. They ID McGowan’s car parked at the crime scene. They go back to McGowan who says he can park his car anywhere. They ask him about his guns before heading to his home to see one is missing. Someone else is using his gun as he has been in custody. They realize it is his mother.

OA and Maggie head to locate McGowan’s mom but she is already on the run and most likely not done killing yet. Back at headquarters, the team looks for possible places the mom might be headed when they really she is most likely headed to a vigil for Thomas.

Tiffany asks them to take off their FBI vests before entering the vigil. They do before heading in. Meanwhile, Jubile and the team get aerial video footage of the area to try and find the distraught mother. OA and Maggie move in on the ground when she is located. When they arrive she is gone. Scola and Tiffany locate her. Tiffany jumps on her before she can shoot Thomas’ daughter. Tiffany saves her life.

Scola and Tiffany have a drink after the case. Tiffany talks about standing up for and doing what is right with integrity.