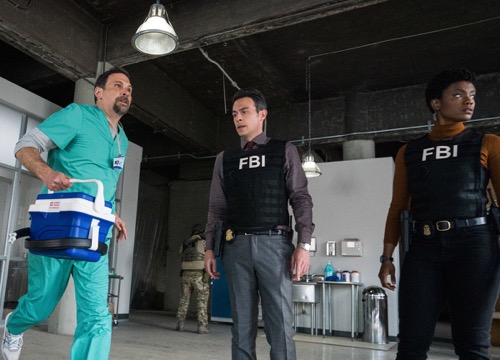 Tonight on CBS FBI airs with an all-new Tuesday, May 4, 2021 season 3 episode 12, “Fathers and Sons,” and we have your FBI  recap below. In tonight’s FBI season 3 episode 12 as per the CBS synopsis, “The team rushes to track down two doctors abducted by a desperate father willing to do anything to save his son; Jubal’s uncertainty in his family life affects his judgment during the hostage situation.”

In tonight’s FBI episode, the episode begins with Dr. Adam Lee and Dr. Nicole Wright coming out of the hospital. Adam hails a cab when a car comes out of nowhere, a masked man comes out with a gun, hits Adam on the head and knocks him out, grabs Dr. Wright, and puts her in the trunk of the car.

Jubal is in a café with Samantha and finds out that Tyler has been sick the past few days. He has been vomiting and running a high fever, his eyes are really bloodshot. The pediatrician ran a blood test and said it looked concerning, Tyler should see a specialist, a gastroenterologist. The good news is, Allan knows a guy, the best in the city and they have an appointment later in the day. He gets a call, he has a case, Samantha tells him to go, it is probably nothing. The appointment is at 3 pm, Jubal says he is going with her.

Omar, Maggie, and Jubal are on the scene where Dr. Wright was abducted, her purse with her cell phone in it is on the ground. Nicole came from money, the FBI thinks there is going to be a ransom demand. On a traffic cam, they get a visual of the car taken off with Nicole in it, there is an EZ pass sticker, it is registered to Dr. Lucas Caldwell, who has a private practice in Manhattan. Isobel says he is a person of interest, bring him in. When the team arrives at Caldwell’s residence, they find the door ajar. Inside, the house is clear. He left his phone and his wallet.

Isobel sees Jubal distracted, she asks him what is wrong, he says his son is sick, he is sure he is fine. He says she is good, she wants to show him a video they got from Caldwell’s house. It turns out, Dr. Caldwell was abducted as well, he isn’t a suspect, he is a victim as well. The two doctors don’t appear to know each other at all, one works in an operating room, the other doesn’t, they don’t live in the same area, they are not the same ages. Isobel says they could have been targeted, not for who they are, but for what they do.

Dr. Caldwell, an internist, has a partner, Dr. Nelson, an anesthesiologist, but he was in a car accident, he in the hospital in an induced coma. They started the concierge practice together. The two have been getting a lot of calls in the past two weeks from Lorenzo Santos, he has been in and out of jail for the past few years and has a connection with a gang called Locos 25.

The team goes to look for Santos, he is in front of a laundromat with another man and it looks like a dope deal going down. The moment Santos sees the FBI he runs and isn’t careful, he gets hit by a truck. Meanwhile, the team is still searching for the man that was with him, Stuart takes him down. The man has an injury to his side and a pile of cash on him. Tiffany asks where he got the money, he says he sold his kidney.

An ambulance arrives, the man, Pedro, says he sold his kidney to Santos, he needed the money. He says his friend sold Santos a kidney last month. They do the procedure at a private clinic. Tiffany shows him photos of Dr. Wright and Dr. Caldwell, he recognizes Caldwell as being the one who took his kidney. Caldwell and Nelson had a side hustle going, doing illegal organ transplants until Nelson gets into a serious accident, so this is why Dr. Wright was kidnapped, she is an anesthesiologist.

They’ve got something, looks like Pedro’s labs were cross-matched with a patient named Tony Diaz, twelve years old lives in Queens. His father is Octavio Diaz, 43 years old, and they’re on a temporary visa while he applies for asylum. He is a high-ranking officer, he will be killed if sent back. Stuart and Tiffany head over to Octavio’s house, his wife is there, she says her son couldn’t get on the recipient list because they have insurance, he is twelve years old and he is going to die. She won’t tell them anything, Tiffany tells her she is under arrest. At the station, they do some more digging and find out that Dr. Caldwell owns another building, that could be where they are doing the illegal procedures.

The team heads to the building, they have found what they were looking for, there is an operation ongoing. Jubal is on the scene when he sees Samantha is calling. He goes outside and tells her he is sorry he couldn’t make it. She looks pretty upset, she tells him that she will text him back when she gets the results.

Inside the building, Octavio is a desperate father, he has Dr. Wright and Dr. Caldwell at gunpoint performing the surgery on his son. Jubal is afraid to go in because he is armed and more people can get killed. All of a sudden, Octavio sees the FBI outside and starts shooting. A bullet from outside hits Dr. Caldwell and Dr. Wright can’t perform the surgery alone. Jubal throws in a phone to speak to Octavio who tells him to get another doctor to replace Caldwell, or he will kill Dr. Wright.

The team brings in Octavio’s wife to get her to talk reason to her husband. She tells him that their son needs to get to a hospital or he is going to die. Octavio says no, he doesn’t care what happens to him, he wants his son to get his kidney. He tells her that their son is going to need her, he loves her more than she will ever know. She tells the team she tried. Jubal offers to trade himself for Dr. Caldwell, pretend he is a doctor, then talk down Octavio down.

They get Caldwell out on a stretcher, Jubal is going in. Octavio tells Jubal how he came up with the money, he says the day before his son’s operation, Dr. Caldwell canceled, he didn’t care about his son, only himself, so he did what he had to do. He never wanted to hurt anyone, Jubal says he gets that and he is going to do everything in his power to save his son, Tony. Octavio reaches out and shakes his hand.

Jubal tells him to let the FBI take his son to the hospital and do the procedure right. Jubal keeps getting in the line of fire so the FBI can’t take a shot at Octavio. Jubal begs him to trust him, Octavio pulls out his gun and points it at Jubal, he says no and furthermore, if his son dies, he is killing him and Dr. Wright. Jubal gives the signal, Octavio is shot in the head. Tony is rushed to the hospital, Jubal gets the kidney and gives it to Dr. Wright, who tells her she is going to need it.

Jubal gets a call from Samantha, he is stricken with the news, his son has leukemia. The good news is, the doctor says they caught it early, the prognosis is excellent, Jubal leaves.

At home, Jubal sees his son sleeping, he goes in and tells him that he is going to be ok.