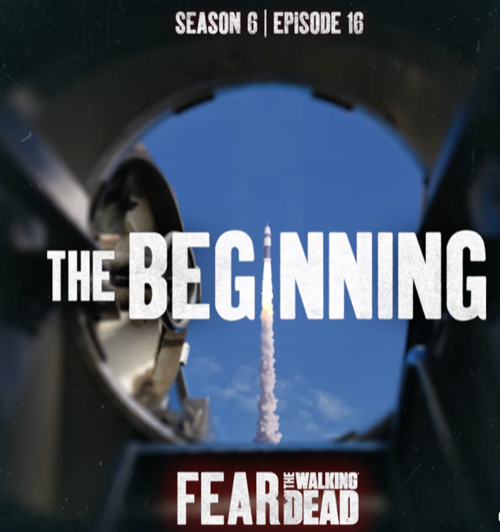 On AMC tonight Fear The Walking Dead (FTWD) airs with an all-new Sunday, June 13, 2021, episode and we have your Fear The Walking Dead Recap below! On tonight’s FTWD season 6 episode 16 called, “The Beginning,” as per the AMC synopsis, “Everyone desperately scrambles to find a way to live out the impending destruction on their own terms.”

In tonight’s Fear The Walking Dead episode, the episode begins with Rachel, Isaac’s wife, she has a child and she is trying to change a tire when the truck falls on her leg and tears it open. She tries to walk off, holding her baby, she knows she can’t make it far and says she is sorry to the baby. She says this the end for her, but not the baby. We see Teddy’s missiles in the air, she straps the baby to her dog hoping that he will take the baby to safety. She takes a knife out of her bag and stabs herself in the stomach.

The group pulled Riley away from Teddy, he tells Luciana, Charlie, Wesley, Daniel, and Sarah that there is a bunker that they can go to for safety. Daniel says he heard some coordinates from someone on the radio. They leave, listening to Riley, and it doesn’t take long for the brakes to go out in the truck they are in, Sarah tells the rabbi to help her, and the rest all hands on deck as walkers come by.

In the truck, Riley tells Daniel this is just the beginning and he can’t wait to see all their faces when everything turns to ash, the phoenix will rise. Before they go any further, Daniel shoots the driver who makes reference to a phoenix, knowing that he is working for Teddy. Riley comes out of the truck and he is shot. More misles are going off, Riley is not dead.

Dwight and Sherry are on horseback trying to find their way. Sherry sees a cabin, she tells him that if they are going out, she wants it to just be them. Inside, they look around and Sherry finds a photo with a man, a woman, and their child. Sherry heads outside, Dwight comes outside, he found two bears. She says they could have had a place like this. She says she wasted so much time, she couldn’t get over the past. She tried to fight the bad guys, but they always win. And all it did was take away time with him. He tells her that she has nothing to be sorry for, he kisses her.

All of a sudden, the family comes out of the house. The man says they have a storm cellar, some people came and took it on them, they said the end is the beginning. The woman begs them to give them their house back. Dwight says he will get them their cellar back for them. Dwight puts rope on the hatch door, ties it to the horse, and yanks it off. Two guys come out running and shooting. One guy Is not dead, Sherry shoots him in the leg again and they leave him there to suffer like he was going to make that family suffer. Dwight and Sherry go into the storm cellar with the family and close the hatch.

Dakota is with Teddy; she tells him that she is the one who saved Morgan at the Gulch. Teddy doesn’t regret anything; he says everything is what led her to him. They stop near a clearing, Teddy hugs her and kisses her on the side of the head when officer Dorie shows up with a gun and tells Teddy to move away from her. Dorie says he is there for her, he wants to say something to her. Dakota pulls a gun on Dorie and tells him that he is just like his son and that is why he found a bullet in him. Dorie tells her that he forgives her for killing his son.

Dorie puts his gun down. Teddy pulls out his gun to shoot Dorie, but June is there, and she stops it. Dakota is confused, then Dorie notices a hatch, looks like Teddy was going to hide out and is more about the beginning than the end. Teddy says when the dust clears, they are going to continue what they started. Teddy is calling her “Sue” and he says he wants this to be about her and him. Dorie says he needs two people to launch the missiles, to turn the keys – he doesn’t care about her. Another missile goes off. Teddy tells Dakota that she can either die, pretend she is someone she is not, or go with him.

We hear Morgan on the radio, he is going to try and stop what Teddy started. Strand is trying to kill walkers, and there are a lot of them. All of a sudden, a man puts a gun on Strands back and tells him to drop his gun. Strand tells him they need to go underground, or they are going to die. The guy pours some booze for the two, they listen to music and look around at the pieces of art history that are in the room. Strand introduces himself as the man ready to die to save the world, but something led him there. Another missile goes off and Strand says his name is Morgan Jones. The man’s name is Howard.

We see Grace, she is laying on the ground, Morgan is still on the radio, he says he is going to stop what Teddy started. He tells Grace to use this time, make it mean something, give herself the end she wanted even if it isn’t the end they all wanted. Grace screams and throws the radio.

Grace returns to Teddy’s control center, she tells Morgan that he can’t do anything. She has seen what radiation poisoning does to people, they don’t want to live like that. She tells Morgan that she loves him and she won’t watch him die like that, they kiss each other and he tells her that he loves her, she says she knows. He tells her that he is sorry for what could have been; he could have been a husband, a father. She says he can be, just not here. The two are about to commit romantic suicide when they hear a baby crying. They put suicide on pause and go to investigate, they find Rachel, she is a walker now, and she has the baby strapped to her back. Morgan takes his stick and rams it in Rachel’s head, they take the baby. Morgan tells Grace that the baby is a gift.

In the truck, they followed the coordinates, stop and find that nothing is there. In the truck, Riley is still alive, he is alive and says he told them there was no escaping this. All of a sudden, there is a CRM helicopter. Before they leave, Wesley writes in yellow spray paint, “This Is Not The End,” on the ground, and partially on Riley’s body.

Dakota kills Teddy, outside the bunker, June and Dorie are underground. The blast goes off, Morgan, Grace and the baby are under a truck. Dakota is turned to ashes. Strand and Howard are in the building, and surprisingly survive the blast. Strand laughs because he is alive. He confesses to Howard, he says he is not Morgan Jones, he is Victor Strand. He has thrown men to the wolves when necessary, he cheated at chess when his opponent’s back was turned, survival, he has done it all his life. And despite the critics, he is still there. He says it feels like the dawning of a new day.

Morgan, Grave, and the baby are alive. They venture from outside the truck and everything is ashes. Another blast, then another.