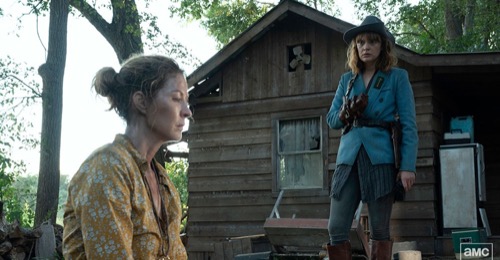 On AMC tonight Fear The Walking Dead (FTWD) airs with an all-new Sunday, April 18, 2021, episode and we have your Fear The Walking Dead Recap below! On tonight’s FTWD season 6 episode 9 called, “Things Left To Do,” as per the AMC synopsis, “A stand-off occurs between Virginia and her rangers and Morgan’s group. Ginny has made a lot of enemies and it’s finally catching up to her.”

In tonight’s episode of FTWD, the episode begins with June burying John, she looks down at her hands and she has John’s blood on them. She sees his gun and takes it. She hears someone load a gun and tell her to put it down, it is Ginny and her henchman. June asks Ginny why her sister killed her husband. Ginny says she doesn’t know why June doesn’t believe her. June continues to shovel the dirt over John.

Victor has all of Morgan’s people lined up, on their knees in the dirt. June joins the bunch. Luciana asks Ginny how many more people have to die because of her. Ginny wants Morgan, she asks Sarah where he is hiding. Daniel, Wes, a very pregnant Grace is also there. Ginny pulls a gun on Daniel’s head and asks where Dakota is. Nobody answers, Ginny finally puts her gun down and says ok if this is how they want it.

She picks up her radio and tells Morgan, she knows he is listening and if he doesn’t bring Dakota back right now, some very bad things are about to happen. Then she says if he doesn’t talk, she is going to blow out Grace’s brains in front of everyone. A gun is pointed at Grace’s head, Ginny puts her hand up and we see Morgan coming on a horse, he says, “I am right here, shoot me and you never see your sister again.”

Morgan tells her that it is over for her, everything she had, everything she is, will be stripped away. He says he knows because it was over for him once. Ginny says he doesn’t tell her where her sister is, she is going to kill off his people one by one. Morgan shouts out loud that everyone needs to hear the truth about Virginia, she is a liar and a hypocrite. He then reveals that Dakota killed the ranger, not Janice, and Virginia covered it up. Ginny panics and goes to speak to Victor. Ginny demands that Victor kill Daniel. Victor turns, he says he is ready for the big show, so are they.

Ginny tells Victor, no, and he says they can do this the easy way or the hard way, it’s her call. Ginny pulls her gun and Victor shoots her. Ginny manages to grab Grace and put a gun to her head as she is dragging her off. Bullets start flying everywhere, Daniel is put into a car with Grace, Ginny’s ranger takes them and drives off. Morgan finds Ginny and can kill her, but he doesn’t. He throws Ginny in a truck and drives off after Daniel and Grace.

Morgan tells Ginny that he finally found out who saved him the night at the Gulch, Dakota. Ginny says no way, Dakota could not have gotten out of there. He says she saved him because she believed that he could kill her. Morgan asks her what she did to that child. Ginny says she has to see her. He tells her that is not going to happen, he needs to tell him what she wants to say. Ginny says she is not her sister, she is her daughter.

When she was young, her parents were ashamed. Morgan hears someone coming and tells Ginny to run, she doesn’t have a choice. All of a sudden, a swat vehicle comes up and starts shooting at them. The vehicle they are in isn’t going to take them much further. They get out and start running. Meanwhile, masked people come out of the Swat vehicle. Morgan tells Ginny the only way they will live if they get the distance between them. The split up, Ginny is stuck under the tree trunk, a woman comes up, she pulls off her mask and is about to shoot her when Morgan tells her not to. Morgan says the time will come when Ginny gets what she deserves, but the time is not now.

Ginny and Morgan arrive at his new homestead, Alicia asks Morgan why he brought Ginny there. He says he had to agree to switch her to get Grace and Daniel back, it’s the only way to save them. Inside, Ginny says it reminds her of her grandparent’s farm. She asks Morgan what he calls this place, he says he doesn’t have a name for it. Rachel sees Ginny and says she shouldn’t be there. Strand shows up with rangers, he shouts and says he has grievances with her. The swat mobile shows up as well, everyone wants Ginny. Al radios Morgan and tells him there are a lot of itchy fingers outside.

Strand says that if they don’t give them Ginny, they will come in a take her. Ginny tells Morgan she wants to change their deal, Dakota gets to live there and she will go outside. Dwight tells Ginny that they will kill her for sure. Ginny says Dakota doesn’t need her, she needs this. Ginny says there is one more thing, she is willing to die, but it looks like they want to twist the knife and she doesn’t want that. She can release Grace and Daniel if he does the honors.

Morgan picks up the radio and gives it to Ginny to make the call. Ginny is let outside of the walls, Morgan is behind her. She says before she dies, she wants them all to know that everything she did, she did to keep them alive. Victor says he wants the satisfaction of killing her. Morgan explains that she let Daniel and Grace go, he made a deal to get them back. Ginny kneels down, takes the sling off her arm, lays her head on a rock. Morgan has an ax, he swings it and doesn’t do it. Ginny yells at him and tells him to hurry. Morgan shouts that if they do this they are no better than her, there is no satisfaction. If they want satisfaction, they should make her tell the truth. Morgan, Dwight, and Ginny back into the compound.

Morgan brings Ginny to Dakota. Dakota is furious that Ginny is there, she is shouting at her and says she murdered their parents. Ginny says they weren’t her parents, she is not her sister. Ginny tells her none of this was her fault, her grandparents didn’t protect her, she did everything for her. Ginny says she thought her not knowing would protect her, she wanted to shroud her from the ugly world and she always loved her. Now, she wants her to get a second chance and she is going to have to work for it. Dakota asks her why she brought her into this world, she should never have been alive.

Danielle is back, he asks Victor what is going on. All of a sudden, Morgan, Alicia, and Dwight come out. Morgan tells Victor there has been so much blood, John just wanted the killing to stop. Morgan says making Ginny live with what she is done is worse than killing her. Morgan takes the ax and puts it into the ground. Victor agrees, Ginny has caused enough damage, they shouldn’t let her do anymore. V

ictor then turns to Morgan and tells him he hopes he knows what he is doing. Morgan shouts out that if anyone is willing to abide by the law, they are welcome to stay. June gets off her horse and walks in. Other people come forward, Sarah, the rabbi, and Grace. Morgan walks up to Grace and hugs her. He tells her that he is so sorry for taking as long as he did. Grace says she wouldn’t be here if he hadn’t fought the way he did. Then she tells him that she thinks it is a boy.

June is inside, the rabbi gives her a note that he was holding from John, he wanted her to have it – June puts it in her pocket.

The swat vehicle leaves, Dwight walks back. Victor tells Alicia she should go and join him, but she won’t, she is staying put. He tells her he is going to show her, he is going to give her a reason to join him.

Ginny is waking up, a dog is licking her face. June tells her the bullet is out. Ginny tells her it is the second time she has saved her life. Morgan tells her that she is going to leave with Dakota, they are giving her a safe path down the riverbed so they can avoid her rangers. June walks up to Ginny to change her dressing.

June tells Ginny that she had a daughter, her name was Rose, she was sick and she tried to protect her and she was killed. June asks Ginny, back at Lawton, with Cameron, did she know what Dakota was capable of. June takes out the gun that Dakota killed John with, she shoots Ginny in the head. Morgan, Alicia, and Dakota come running. June walks out and just keeps walking, with the gun in her hand, she walks right out of the compound.