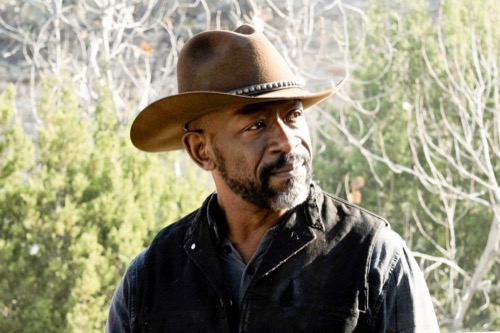 On AMC tonight Fear The Walking Dead (FTWD) airs with an all-new Sunday, April 25, 2021, episode and we have your Fear The Walking Dead Recap below! On tonight’s FTWD season 6 episode 10 called, “Handle With Care,” as per the AMC synopsis, “A threat worse than Virginia is on the horizon; Morgan calls for unity and invites all survivors to his settlement, tasking Daniel to keep the peace; however, Daniel will need to face his own challenge in hopes of protecting his friends.”

On tonight’s FTWD episode, the episode begins with Daniel, he says he felt hopeful when the day began. We then see him in a tent listening to music. We see others building, planting food, and building a new life in the dam. Daniel is then serving up soup to Morgan, he asks if this is how he imagined it. Grace walks up, she says she doesn’t have much of an appetite. Daniel is glad to see everyone together, it seems like everything he did is starting to pay off. Everyone in the dam has to give up their weapons, they are locked in a shed and only Daniel and Morgan have the keys.

Daniel is actually behind bars, and is narrating, he says after this, everything changed.

Daniel is on watch, he sees the swat truck show up, Sarah rides up on horseback, so does Victor. Morgan goes out to speak to them, he says he called them all here so they could work together, put their differences aside. Morgan says only one rule, break it and you are not welcome there again. He invites them in. Everyone checks their weapons at the door, for their safety and for theirs, they are all logged. Victor brings Daniel his cat, he found and thought he would want him. Daniel thanks him for the peace offering. Victor says he didn’t see Alicia, Morgan says she is out on a supply run with Al.

Grace is having Braxton Hicks contractions, or she might be in labor. Morgan and Rabbi Jacob Kessner go out to try and find a fetal monitor, Daniel is in charge and he calls a meeting. Dakota is not there and the rest are not happy. Daniel tells them they are not there to rehash the past, it is about building and protecting the future. He doesn’t want to believe that one in the group is a traitor, but now when they need it the most, they can’t trust each other.

All of a sudden, there is an explosion. Daniel says it is probably an accident, Luciana doesn’t think so, this is the MO from Tank Town attacking from the inside. Daniel wants to believe it is an accident. Walkers are not coming towards them, the explosion probably alerted them. Victor wants his weapons back, Daniel says that there is not enough to kill all of them so they might as well not use them. Daniel goes to the weapons shed, he discovers it is empty. This was no accident, someone wants walkers to come after them and kill them all.

Grace asks Daniel what happened out there, he asks her if she is well enough to travel, it is not safe there. There is a fishing shack in the woods, with water, food, and a first aid kit and he wouldn’t ask her to go if it wasn’t absolutely necessary – he sends her with Charlie. Daniel knows he needs to find those weapons. Meanwhile, walkers are piling up outside the front doors and somehow they have figured out how to come inside. Sarah is the first one to see that there is a breach. A gun goes off and saves Dwight’s life, Daniel says to Victor, it was you. Daniel let the walkers in on purpose, he want to fish out who took the weapons.

Daniel locks up Victor, he says he broke a rule, he brought a weapon inside the gates but he didn’t steal all the weapons. Victor stands by his word that he didn’t do it. The walkers have broken down the front gate and many more are on their way in.

Sarah tells Daniel that if they all work together maybe they can beat this thing. Daniel has a gun, he goes back to the cell and fires at Victor, asks him where the weapons are. Victor tells Daniel that he has to forgive him, he doesn’t know where the weapons are. Daniel hears bullets outside and runs to see what is going on. Outside there are dead walkers everywhere and Morgan is back. Daniel returns to the cell, he tells Victor it is just a matter of time before he finds the weapons.

Victor asks Daniel why this place means so much to him. Morgan made him believe that he could create a home that Los Angeles could have been and he thought he could redeem himself for all the lies he told and for Ophelia’s death. Morgan calls Daniel, he says he is at the shack, but Grace is not there. Morgan, Sarah, Daniel, and rabbi fan out to look for Grace. Finally Grace answers, Sarah has found her and the contractions are getting closer. Daniel says he told her to go to the shack in the woods, she asks him what he is talking about. Daniel’s side of this story is different from Grace and Charlie, they say he told them to go to the caverns and show a map that he drew for them.

Morgan gets a call, they found the weapons in Daniel’s shed. Morgan asks Daniel what is going on, he says someone is trying to make him look bad. Morgan says it seems strange, the location where he sent the women and now this. Morgan asks him if he is ok, if he is feeling alright. Daniel says he is not sure, it is confusing. Morgan tells him to talk to somebody.

Now, we see Daniel again and he is talking to June, she tells him they are going to get to the bottom of this, she promises him. June is running some tests on Daniel, she tells him that she thinks it is psychological. June tells him it probably happened because he finally slowed down and he has something to lose now. Daniel says he deserves this. June says it is far from her expertise, let her read about it and she will come back to him. Morgan tells June that it is good she could be there for him. She says she is going to check on Grace, then she is leaving the same way she came in. Morgan asks if Daniel could be faking it, she says she doesn’t think so. Morgan asks Daniel if there is anything he needs, he nods no.

Victor and some others are leaving, they say they are going to take their chances. Dakota then remembers something, she says she has been thinking about everything Ginny said, about the people who painted the messages. The last place she had the rangers scouting for them it was two days south of Tank Town.

Daniel is leaving as well, he tells Charlie that he can’t stay, it is not safe for him to be there. Morgan tells him that nobody is going to do anything to him. Daniel says he is worried about them, he put them in danger. He says he is going to the warehouse if it is still there. Victor tells him to go to Lawton with them, it gives him a better chance of survival and they can keep him safe. Victor tells him that he is doing this for Ophelia, so he can live an honest life. Morgan asks Victor if he is really going to help him, Victor says he is better off with him. Morgan shakes Daniel’s hand and tells him to take care of himself. Daniel then hugs Charlie and says he will get better.