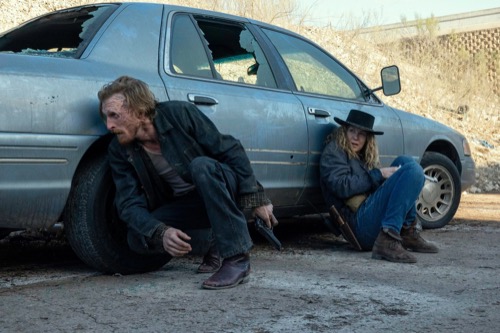 On AMC tonight Fear The Walking Dead (FTWD) airs with an all-new Sunday, May 16, 2021, episode and we have your Fear The Walking Dead Recap below! On tonight’s FTWD season 6 episode 13 called, “J.D.,” as per the AMC synopsis, “June splits off from the group in an effort to gather any information to help stop an oncoming threat.”

In tonight’s FTWD the episode begins with June, she walks up to Morgan and asks how she is doing, he says she is holding up but she won’t see anybody. She thinks the baby is dead because it absorbed all the bad from her body. June wants to see her, Morgan says no, Grace lost the baby because she couldn’t do the one thing that John wanted her to do, be here.

June walks away, she is on the road where it is written, “The End Is The Beginning.” She looks at her map, makes some notes, and takes out the envelope with her name on it, touches it, then puts it back in her pocket. She hears something and pulls out her gun, it is Dwight.

They have company, it is Sherry, she tells them to keep talking, she didn’t mean to interrupt. Sherry goes to take some gas, June tells her there is none there, they must have taken it when they wrote the message on the road. All of a sudden, June sees someone else and asks Dwight if he is expecting more company, he wasn’t.

June follows the shooter, she sees his RV and goes inside where she finds the walls covered in pictures and clues, all pointing to the Believers – the ones that are led by Teddy and paint, “The End Is The Begining,” everywhere.

June hears a gun and it is pointed right at her. The man seems to be on the same side as her. He tells June to drive the RV. He tells her that he didn’t ask her to mess up his investigation, she can shut up and drive. June swerves the RV and pulls it to a stop. She pulls out her gun and he asks her where she got it from with the JD on it, that is him, John Dorie.

Dwight and Sherry are concerned about June and follow her on horseback. Sherry tells him she just wants to find June and be done with it. He says he doesn’t want to overwork the horses. They talk, he tells her that he is there because of John and June. Sherry gets on her horse and makes a mad dash.

June tells him that John thought he was dead. He says he hasn’t seen his son since he was twelve. June asks him if he has any questions, where he is, and what he has been up to. He says he knows the answer already, the two rings, the gun – he is a cop and can read these things. She tells him that his son was a cop too. She lost her jacket, she wants to go back. There is a letter in the pocket, she hasn’t read it, but it is important. All of a sudden, John Sr. hears a noise under the RV, June hit a walker and knocked something loose.

Sherry wouldn’t listen to Dwight and now her horse’s heart is giving out, he is laying on his side and Sherry just walks over with zero feelings and shoots her horse. Dwight is shocked, he asks her what is going on. She says she is going back home to Virginia and going after the person who caused everything, Negan. She is here to say goodbye.

Dwight and Sherry are on his horse, he finds June’s jacket.

June is looking over the newspaper clippings on the walls and sees Teddy, John Sr. put him away, but with all this, he is out. Teddy used to say “the end is the beginning” before the apocalypse.

He decided to stretch the law and do the wrong thing for the right reason so he could lock Teddy up back then. This caused him to lose faith and was what led him to abandon his family.
John Sr. tells June that the best thing he did is to have nothing to do with his son. He tells her the cabin is where he left his son forty years ago. She tells him that she lost John there. She goes on to say that Teddy has John’s other pistol and she wants it back.
June and John Sr. are on foot, he tells her that Teddy’s new followers are armed and motivated.

Sherry and Dwight are in the RV, she asks him what are the odds to find John Dorie’s father.

June and John Sr. arrive at a fully stocked store. She offers to look at his hand, he has a bandage on it. He asks her if John ever told her about the guns. They have been in the family for six generations. She tells him about her wedding to John. June is looking in a back room, John Sr. locks her inside and says she is the closest thing to family, he is protecting her. She tells him that he is abandoning her as he did to his son.

John Sr. is back in his cabin, looks like someone is living there. He raises his rifle and looks around, when he sees nobody inside, he heads outside to find a walker and a squatter. John Sr. says it is his son’s cabin, that makes him a trespasser. He demands to about Teddy, the guy says whatever they got planned, it’s big, they want to kill everybody. The guy jumps him and shoots him, but June walks up then and shoots the guy. John Sr. has fallen near his son’s grave and his bloodied hand touches the cross, we can hear June say, “take him inside.”

John Sr. has woken up, he makes his way outside the cabin where he sees June, Sherry, and Dwight, and June has her jacket. June sees John Sr. and tells him that he really shouldn’t be out of bed. He says he didn’t run from his boy because he didn’t care, he did it because he did care. He tells her that she was right, he was punishing himself, he was punishing himself and his boy. He did come back, John looked so happy, John had this light about him, but of course, June knows. He decided then and there that

John was better off without him, he didn’t look back and he never said goodbye. She tells him it is not too late.

The four of them stand around John’s grave, June pulls out her letter and reads it, and wouldn’t you know it, he talks about his dad it the letter. He basically tells her that he will never stop trying to get back to her, she rekindled the light in him. June is crying, John Sr. puts his hand on her shoulder.

Dwight has the pickup ready for Sherry, he tells her she will get as far as Louisiana. She says she is not ready for this to be goodbye. Seeing how long John Sr. has chased Teddy, she says she can’t do that. She has been using Neegan as an excuse to why she can’t be with him. He says he has changed, but he is not the same person that he used to be and she doesn’t have to be either. He tells her they can start over, he is willing to give it a shot if she is, she nods yes, he hugs her.

June gives Dwight back the wedding rings, he thanks him for loaning them, and now they should be with their rightful owners.
June, John Sr., Dwight, and Sherry head back to Morgan’s homestead, June introduces John Sr. to Morgan who says that John saved his life more than once. June tells Morgan that he knows everything about Teddy and can help them. June tells Morgan that she is sorry, he tells her to check on Grace.