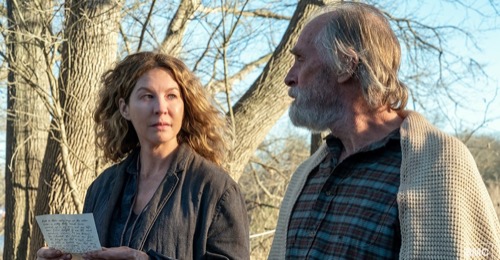 On AMC tonight Fear The Walking Dead (FTWD) airs with an all-new Sunday, May 23, 2021, episode and we have your Fear The Walking Dead Recap below! On tonight’s FTWD season 6 episode 14 called, “Mother,” as per the AMC synopsis, “Alicia is held prisoner by Teddy; there, she reunites with old friends and must confront her past if she hopes to move on and escape.”

In tonight’s Fear The Walking Dead episode it begins with Maddox, he is in prison and another man is being walked down the isle to his demise. All of a sudden, the doors to his cell open, there are walkers everywhere. Maddox goes back in his cell, not to bring attention to him but one comes in. Maddox has something sharp in his hands and he stabs the walker in the head.

Alicia is laying down, listening to Theodore Maddox. He walks into the room and tells her that he wants reassurance that she is dedicated. She tells him that he won’t give him what he wants. Riley is there, he walks forward and points a gun to her head.

Teddy has a personal matter to attend to, he wants to take Alicia with him. Riley questions him and Teddy tells him not to. New recruits arrive and Dakota is one of them. Teddy tells Dakota that she will join them on their drive. Teddy has some keys around his neck, he gives them to Riley and says if he doesn’t show up tomorrow, he knows what to do. Teddy and Riley walk away, Dakota says she got there on purpose, she was looking for her. Teddy is back, they all get in the pickup and leave.

They make a stop and head to a cemetery. Teddy goes to see his mother, he takes her out of the tomb and hugs her corpse, this guy is nuts! He tells the duo that his mother can be a part of the new beginning. He reveals that he was in a prison cell condemned to death. He says the world changed and with it, his freedom where he could preserve everything he loved and destroy everything he didn’t.

Alicia asks him about the keys, he says they unlock their future. Dakota says he sounds like her mother, then a tire blows out and mother flies out of the back of the pickup. Teddy runs out and kisses mother, asks the two to help him get her back up in the truck. Then, two walkers are coming, nope, about ten walkers are coming. Both Dakota and Alicia go into crazy killing mode. We hear a gunshot, it’s not Teddy, it is Cole. Teddy calls Riley and tells him that he is in need of roadside assistance. Teddy walks off to get better reception on his walkie-talkie. Cole and Alicia catch up. Teddy returns and tells Cole that he is going to need his gun. Cole gives the gun to Alicia.

The four starts to walk, Dakota and Teddy share why they were both locked up. Cole is walking with Alicia, he says they can take Teddy out, she says she can’t until she knows what he is doing. She says he has a bunker where there is food for years. He offers to her to join his people want she figures it out. The team arrives at a dealership where there are plentiful supplies to fix the pickup. Teddy keeps staring at Alicia, he tells her that she reminds him of his mother. All of a sudden, Cole’s people show up and he tells Alicia that he is an unsavory type. Doug is there, Cole says she should have let them die.

Cole says about a week after the fire at the stadium, they were looking for a place to hold up, went into a motel, some people were there waiting for them, they killed most of them. So they have decided to do the same thing to people who cross their paths. Teddy tells Alicia they need to get rid of them, everyone aims their gun at Teddy.

Cole points his gun at Teddy who just keeps smiling at him. Teddy tells him to kill him, return him to the earth, someone else will finish what he started. Cole drags mother out of the pickup, he shoots mother in the stomach and in the face. Teddy says that it is not his mother, she is buried at the farm. Cole tells Alicia she is sorry, he tells her to come with them. She says no, she has to find out what they are doing. He says if she doesn’t go with him, he will have to kill her too. She tells him to go to hell, he tells her to get on her knees.

Cole has all three down on their knees, he tells them it is ok. Alicia asks Cole if he is really going to do this. He promises to bury her. All of a sudden, walkers approach. Cole points the gun at Teddy and Alicia jumps him.

Alicia is in control, she has a gun, all of Teddy’s people are taken by walkers. Alicia tells him that her mother was supposed to have died for a reason, she shoots Cole in the head. Teddy and Dakota are watching. Alicia tells Teddy is wrong, you don’t have to destroy everything to make it better, just people like him.

Alicia tells Dakota she didn’t want to kill Cole, she had to. Teddy tells Alicia that he is so proud of her, she isn’t afraid to change. He says his mother thought he was crazy, he killed her and buried her in the backyard. In spring, the most beautiful morning glories sprouted over her body. He knew then that we needed a new beginning.

He tells her that she deserves the truth, the key is to a submarine that has a nuclear missile on board. It’s washed up by Galveston. Alicia points the gun at him, but Dakota, being Virginia’s sister, points a shotgun at Alicia’s back. Dakota says she wants a fresh start, Teddy tells her not to shoot Alicia. Alicia uses the radio, she calls Victor and tells him what she can until Riley shows up with backup. Alicia is brought to a government bunker and locked in a cell. This is the home base for the Believers since the other one got burned down.

Teddy tells Alicia she is the one that is going to finish what he started, the beginning is the end. He tells her that she is going to rebuild the world from her cell. He bids her good luck and walks away.