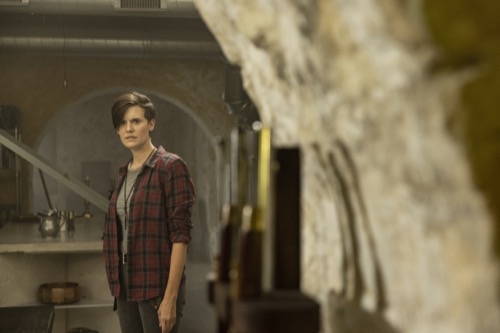 On AMC tonight Fear The Walking Dead (FTWD) airs with an all-new Sunday, November 7, 2021, episode and we have your Fear The Walking Dead Recap below! On tonight’s FTWD season 7 episode 4 called, “Breathe With Me,” as per the AMC synopsis, “Against the advice of the group, Sarah searches for Wendell and, in the process, encounters a dangerous survivor who forces her to take part in a search of his own..”

Tonight’s Fear The Walking Dead episode begins with Sarah, she wakes up to find a walker and shoots it just in time before it gets her. She has been out for two days in a compound called Fort San Vicente. Luciana, Daniel, Al, Charlie and Wes are all there. Daniel says he closed the gate, doesn’t know how the walker got in there.

Sarah doesn’t know how she got there. Al says the CRM helicopter crashed, she asks who the pilot was and Al says it is better if she doesn’t know. Sarah asks about Wendell, they haven’t found him, except for his ball cap. Sarah says they should go find him. Luciana tells her that they can’t go out there, they will die. Sarah is adamant, if Wendell is out there, she will find him.

Sarah is determined to find Wendell somewhere in the wasteland. She calls out on the radio and Morgan answers, she tells him that it is music to his ears, he thought he was dead. She says she is looking for Wendell. She tells him who she is with, she says Al saved her. She is at a lookout point, she tells him to be careful there is a warhead nearby somewhere that is leaking. He manages to tell her that he is hold up in a submarine with Grace and a baby before the connection dies.

Sarah sees a truck, she heads down and goes inside, finds Josiah’s brother’s head in a box and Josiah is there. He tells her that she is going to help him get to Morgan. Just then, a walker approaches Josiah and Sarah tries to grab his gun, but it doesn’t work. Josiah tells her that is eh helps him, he will help her find Wendell, or maybe she wants Wendell it end up like his brother. She asks what happens to Morgan if she leads him to him, he says she should be asking what happens to Wendell if she doesn’t accept his terms.

They drive a distance and Josiah tells her that if he gets exposed, she is going to give him some of those pills she has, and his dog as well. Walkers are approaching, Josiah tells her that it is time that he gets to work. He asks her how long Wendell is missing, she says seventy eight days and she is sure that he is still alive.

She mentions that he has been in a wheel chair since he was a kid. Josiah’s dog, Rufus, is a cadaver dog, he gets something from Sarah that belonged to Wendell, Rufus heads out to look for him. She calls a stone called psycho and a dead man, she says he is not going to be able to do what his brother couldn’t. Rufus starts barking, the two run to see what he is barking at.

Sarah and Josiah find a herd of walkers and a man who has a truck full of them. Josiah makes the man strip, he finds a bandanna that has Wendell’s scent on it and tells the man to lead them to wear he found the bandanna.

He brings them to a barn where there are many walkers, she finds Wendell’s chair in one of the stalls. The man says he was of no use to him and is probably crawling around somewhere if they want to look.

All of a sudden, the man opens one of the gate and walkers are everywhere, while Josiah and Sarah are trying to defend themselves, he makes a run for it. Sarah makes it to the truck, she hears Morgan on the radio and he says he is on the way to the rendez vous. Sarah goes to leave without Josiah but he manages to crawl in the truck just in time, he tells her that they had a deal and he kept up his end.

She tries to open the door and through him out, when she is not paying attention, they crash over a small cliff. They crash near a war head and Sarah tells Josiah that they need to get out of there. Sarah starts having a panic attack, he tells her they are going to get out of there, he promises her. He tells her that they can’t get out of there alone, she needs to call Morgan. There is a horde of walkers outside the truck, the go out and start attacking with Rufus in tow.

Morgan shows up and both he and Josiah start fighting, Sarah screams that Josiah is not a killer. All of a sudden, Rufus gets hurt, Morgan later tells him that he is sorry. Josiah says that Rufus shouldn’t suffer he saved his life twice and now he is going to have to take his. They bury Rufus, and Morgan and Josiah make amends. Morgan says he thinks Wendell might be with Strand, without his chair he would have needed someone to take care of them and Strand is building a place.

When they arrive there, Morgan mentions that Strand also has June and John’s dad there. Two armed men of Strand show up and want to know why they are there. Strand also shows up, he says he saw them coming miles away. Morgan says this is about Sarah, she asks him where Wendell is. Strand says that Wendell is in fact there, he is thriving, He tells them that if Wendell leaves, it is not a revolving door, he is not welcome back. And, he tells Sarah that Morgan, Grace and the baby are barely scraping by. She tells Strand to keep him and not to tell him she was there, she would rather he be safe. Josiah and Morgan try to offer her some emotional support.

Josiah heads off on his own, Sarah heads out with Morgan.

A horse drawn carriage of people who have on radiation safe gear, and they found the dud.