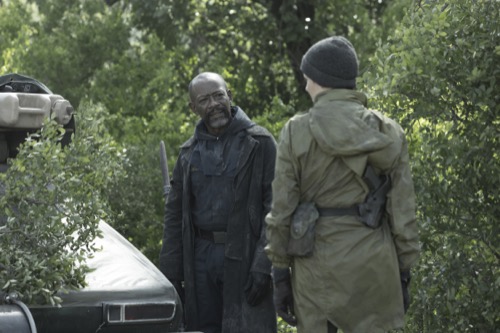 On AMC tonight Fear The Walking Dead (FTWD) airs with an all-new Sunday, November 21, 2021, episode and we have your Fear The Walking Dead Recap below! On tonight’s FTWD season 7 episode 6 called, “Reclamation,” as per the AMC synopsis, “Morgan searches for Al, only to discover that he’s not the only one looking for her, and that his search may have put a target on his own back.”

Tonight’s Fear The Walking Dead episode begins AL, she is packing up her tapes and a few other things. When she hears someone on the radio she goes outside in the radiated wasteland, she puts on a mask and starts look around. Then we see Morgan, he is recording himself on Al’s video camera in her abandoned SWAT truck. He is wondering where she went because he knows she wouldn’t go far without her gear. He checks the radiation and it is safe enough for him to take off his mask.

He tells her the other say she got separated and thinks she left on her own. He tells her to stop running, just for a little while. While Morgan is leaving the message, a CRM helicopter flies over AL she hides. The helicopter lands, they are looking for Al’s girlfriend Isabelle. Al races back to her vehicle, Morgan shows up and says he and Grace were looking for her. Al says they have to go, “they” will be back and if they stay here they will die. The SWAT vehicle is out of gas, the two flee on foot.

Shots ring out and Morgan demands Al to tell him who they are. Al tells him about Isabelle betraying the CRM in order to save Al and the others from the nuclear explosion, and now “they” are out to find her and kill her.

Grace shows up with a getaway car, Al comes up with an idea to draw the CRM away and give Morgan and Grace time to refuel the SWAT truck with the helicopter’s fuel and get some ammo. Al tells Grace that she is sorry about the baby, Grace says some days are hard and different. Morgan tells Al that Rachel didn’t make it, so they have become the best thing to parents for her child.

Morgan and Grace go to the helicopter and get fuel for the SWAT vehicle, he calls Al and tells her there is no ammo, she tells him not to worry she has it covered. She tells him that she won’t let him and Grace get hurt to save her. She goes off the radio. Al calls the CRM and tells them to meet her, little do they know that she is setting up a trap for them with a cannon.

Grace and Morgan are in the SWAT vehicle, Grace is looking at the video tape, interviews with everyone before Al split. She thought she would find a clue where Al might lead the soldiers. Meanwhile, Al does a test run on her cannon with a walker, it works and blows him to pieces. Al preps the cannon again.

Grace and Morgan are ambushed by two CRM soldiers, they tells Al that they will kill them if she doesn’t tell them where Isabelle is. All of a sudden, Morgan gets the upper hand, and can actually shoot the two CRM soldiers if he wants to, but he doesn’t, he just shoots warning shots for them to leave Grace go. Grace runs to the truck and pulls forward towards Morgan fighting with the two soldiers, she slows down and Morgan jumps in. All of a sudden, a CRM helicopter is following the SWAT track, Morgan calls Al and says they are following them.

It all comes to stand when Al’s cannon goes off and kills the CRM soldiers. Morgan, Grace and Al are on the road, Morgan tells her that he saved her life, he wants an interview. The next day they stop at the side of the road, Morgan wants to know why she is not going after Isabelle and she wants to head off alone. Al really won’t give much info and in the end, they part ways. Al takes some gear and walks away.

Al goes back to the blown up soldiers and goes throw their pockets. Morgan shows up, she tells him that she made up her mind. All of a sudden, the CRM soldiers walkie talkie goes off. Al ends up leaving in the helicopter, alone.

Al finds Isabelle and warns her that the CRM has tracked her down and it is not safe. They have a warm reunion, Al admits she was scared. The two leave together.