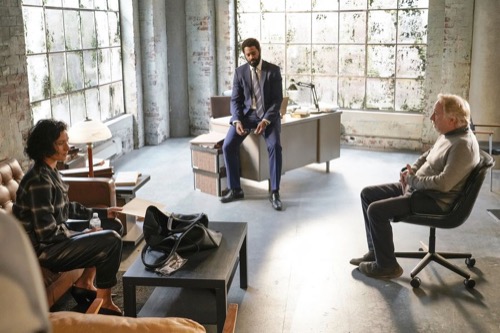 Tonight on ABC their new legal drama For Life inspired by the life of Isaac Wright Jr. airs with an all-new Wednesday, February 3, 2021, episode, and we have your All Life recap below.  On tonight’s For Life season 2 episode 7 “Say His Name” as per the ABC synopsis, “Aaron takes on the case of an unarmed man shot by a police officer. Safiya represents Ronnie after he’s arrested and roughed up by law enforcement, and the family struggles with whether to have Aaron Jr. baptized.”

In tonight’s episode his name is Andy Josiah. He was married to his wife Elaine and he was a father of two. His children Marcel and baby daughter Layla were both young. They both needed their father more than ever and unfortunately a bad arrest took him away from them. Andy’s case came to Aaron’s attention. Aaron was dealing with family issues at the time because the other grandparents of his grandson AJ wanted the baby baptized and Aaron’s family wasn’t sure about because they weren’t religious. However, that all seemed small after George Floyd. Floyd’s case brought worldwide attention to the violence that so many in the Black American community were facing. Jasmine had cried when she saw the video. She easily saw how it could have been her father, her boyfriend, or even her son in Floyd’s position one day.

Jasmine was traumatized after seeing the video of Floyd’s death. She cried in her father’s arms because she was feeling so much and she didn’t know where to place it. The outrage after Floyd’s death helped channel such emotions. Jasmine began protesting and Ronnie joined her. Ronnie wasn’t feeling the same as Jasmine. Jasmine wanted to protest everyday all day. She left the caring of her son to Aaron and eventually Aaron had to say something. He had to remind her that she has a small child. AJ is still a baby and he needs his mother. His grandfather could only do so much. Jasmine told her that she was protesting for her son because she wanted a better world for him and she felt they should be angry. She didn’t know why her father stopped being angry after what was done to him.

Aaron was still angry. Aaron disagreed with how Jasmine was doing things, but that didn’t mean he didn’t agree with her fundamentally and it was because Jasmine reminded him of how unfair things were that he agreed to talk to Andy Josiah. Josiah’s car was brought to Aaron’s attention by Safiya. She had been watching the protesting and she wanted to do something when she heard about Josiah’s case. Josiah was pulled over during a traffic stop. He was pulled out of the car for no apparent reason and this worried his son who was in the backseat. His son was in a car seat. He tried to get out of the car seat and when Josiah tried to reach his son he was shot. Josiah was left paralyzed by the shooting.

Josiah was also charged with resisting arrest and that was bull. Josiah complied with everything the cops told him to do. He shouldn’t have even been taken from the car. There was no justification for doing so. Josiah was pulled over, he was asked for license and registration, and he had provided both to the younger officer. The younger officer returned to the car to run the information. He left the older officer in charge of Josiah and it was this officer that was the problem. He asked Josiah to step out of the car. Josiah asked if he was under arrest and the officer didn’t respond. He just began grilling him about whether or not he had drugs on him or were drinking. Josiah was clean. He doesn’t do drugs and he was out that night picking ice cream for his wife.

Josiah was not a wealthy man. He was a truck driver and his wife was a stay-at-home parent. He didn’t have the money to fully fight the resisting arrest charge. He also couldn’t work like before because of his sudden paralyzation. The location of the event was even working against him. Josiah was shot in Staten Island and Staten Island is an Old Boys Club. The judge and the District Attorney were joking around when Aaron and Roswell showed up in court to defend Josiah. They were doing it pro bono. They also had several requests to make and one of them directly affected Josiah. Josiah was currently in the hospital. He was being treated for his wounds and for some reason he was left handcuffed to his bed for almost two weeks.

Some people don’t know how dehumanizing being handcuffed is. Aaron does and so he wants them to remove the handcuffs. He was even asking them to put a guard on the door rather than leave his client handcuffed. The judge in their case said he had to think about it. It was technically a known police policy for the last fifty years to keep someone who was at risk handcuffed. The District Attorney claimed Josiah was a risk in spite of the man being paralyzed and Aaron was doing his best to defend his client when his private life intruded. His daughter called because her boyfriend Ronnie got arrested a protest. Jasmine was feeling guilty because she was the one who dragged Ronnie to the protest and he hadn’t wanted to go. He only went because of her.

Ronnie it seems had spotted someone rioting. He flagged down the cops for help and they instead blamed him for the property damage. They roughed him up, too. They threw him in jail for “resisting” and Aaron got him help. Aaron didn’t defend Ronnie because he knew some judges just didn’t like him. He instead asked Safiya to defend Ronnie and she got him released on his own recognizance. Ronnie is out now. His release was a great relief for his family and his mother talked to Jasmine. She could see how Jasmine was pushing everyone away. Jasmine was only doing so because she felt guilty for wanting AJ and for bringing a black child into this world. What she really needed was to speak to another mother of a black son. She spoke to Ronnie’s mom and that helped ease her guilt.

It also helped when her own mother was able to come home. Marie had been working on the hospital for eight straight weeks in the covid department and so she had been separated from her family for a while. She finally got a break from work which allowed her to return home. Marie was later talking to Aaron about their daughter when Aaron got a call. He was notified when Josiah fell into a coma. Josiah’s family was told there was no hope and it was suggested that they take him off life support. Which ended up changing the nature of his case. It went from Josiah being on trial to the officer who shot him now being in the guilty seat. And usually police officers were able to skate official charges against him.

Aaron wanted this time to be different. He talked to Josiah’s wife and he convinced her to apply public pressure. They needed to force the Attorney General into taking this case. Aaron wanted justice for Josiah and, up until he was officially declared dead, Aaron still fought for him. He was able to get the handcuffs removed so that Josiah died with dignity.

Aaron also later spoke with Ronnie’s father and they talked about the fight ahead because in spite of Ronnie’s father doing everything right – the cops still laid hands on his son. All they saw was a black kid. It didn’t matter that Ronnie is a good kid or that he gets straight As. He was just black. Ronnie and his family eventually persuaded Jasmine into agreeing to baptize AJ. He was being baptized the same day that Josiah was being buried by his family. And while Aaron may not have good looking for such a position, someone suggested to the Attorney General that it would be a great idea to name Aaron as special prosecutor to oversee the Josiah’s murder trial.