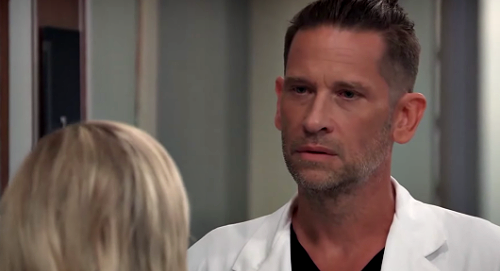 GH fans know Maxie has been worried about the possibility that Austin might remember what really happened that night.

Austin was apparently drifting in and out of consciousness since he’s indeed been recalling a few things. He once talked about a recurring dream where he heard two women talking in the forest.

Most recently, Austin thought back on Brook Lynn telling Maxie she was the bravest person she knew. He couldn’t recall the details of when Brook Lynn said that, but Maxie knows it was the night the baby scheme was set in motion.

Of course, there have been lots of other little clues along the way for Austin.

Maxie has been on edge and even tried to downplay her friendship with Brook Lynn, which didn’t make sense to Austin since they spend so much time together.

Austin has been gathering puzzle pieces that could lead to his memory being jogged at any moment.

It’s probably not a good idea for Maxie to be spending more time with Austin, but she’ll play with fire by doing it anyway.

During the week of October 18-22, both Maxie and Brook Lynn will share the same growing worries.

They’ve always got “Bailey Quartermaine” aka Louise August (Harper and Scarlett Bloom) on their minds, so these mutual concerns may be about Austin putting that puzzle we mentioned together.

Since GH has positioned Austin to figure this out, he’ll have to decide what he’s going to do with the baby protection plot info.

Step one should be demanding the truth from Maxie and Brook Lynn. They’ll ultimately have to admit Brook Lynn was never pregnant and that “Bailey” is actually Louise.

Austin may keep the secret, but he could demand a steep price if he uses this to his advantage – especially when it comes scoring his seat at the Quartermaine table. This might give Austin some power over Brook Lynn and lead to more tension.

Whatever the case, Austin may be gearing up for a showdown with Brook Lynn and Maxie over their baby deception drama.

General Hospital spoilers say Austin will stir up some chaos down the road, so stay tuned.

CDL’s where you want to be for terrific General Hospital spoilers, news and updates, so visit again soon.