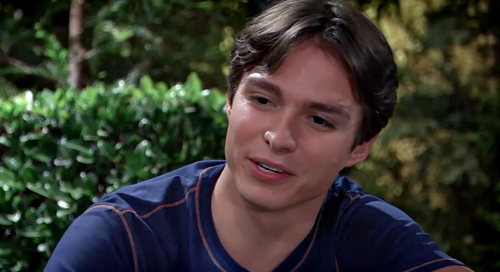 General Hospital (GH) spoilers tease that Cameron Webber (William Lipton) will attack Spencer Cassadine (Nicholas Chavez) and make sure their rivalry is back on. Spencer’s manipulation of Trina Robinson (Sydney Mikayla) is sure to revive this old war – and Josslyn Jacks (Eden McCoy) will inevitably get caught in the crossfire!

GH fans know Spencer and Cameron had their fair share of fierce faceoffs when they were younger. Now that Spencer’s been aged a bit and has joined the rest of the older teen scene, it’s time to bring back the battle.

Spencer knew he was in trouble the second he found out Trina’s friends were named Joss and Cam, so he took off instead of joining Trina for some Fourth of July fun. However, Spencer can only delay this revelation for so long.

Sooner or later, Trina will find out “Victor” is actually someone Josslyn and Cameron already know quite well – or at least they used to.

You can bet Trina will be upset over Spencer’s deception, and Cameron should become quite protective of his close friend.

When it comes out that Spencer is the stalker who’s been causing drama for Ava Jerome Cassadine (Maura West), that’ll be another reason for conflict.

We wouldn’t be surprised if Cam punched Spencer in a moment of intense anger, but he’ll at least launch a verbal attack over all the secrets and lies.

Josslyn should side with Cameron on this since she cares about Trina and will no doubt feel like Spencer manipulated her.

At the same time, Josslyn could find herself feeling uneasy about Cameron fighting so fiercely on Trina’s behalf.

Although Cameron and Trina decided to stick to friendship, we could see Joss’ jealousy flare up if she feels like there’s more going on.

GH would be smart to reopen the door to a Cameron and Trina romance – just to make this a proper quad with Spencer.

They need to be able to mix and match, so we’ll see if Cam’s feelings change in the midst of all this.

Regardless, Josslyn will get caught up in the mess along with Trina, Cameron and Spencer, so this will certainly kick off some exciting summer mayhem.

As other news and updates come in, we’ll keep you posted. General Hospital spoilers say some Port Charles bombs are set to drop, so stay tuned!

CDL will have other scorching General Hospital spoilers, updates and news, so make us your hotspot.