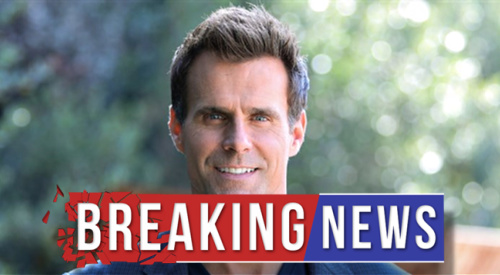 General Hospital (GH) spoilers reveal that the ABC soap is adding an actor who’ll be familiar to many soap viewers. Cameron Mathison is joining the cast of General Hospital in a role that’s yet to be announced.

Of course, Mathison is best known for playing Ryan Lavery on All My Children. AMC fans may recall that Mathison picked up two Daytime Emmys for his portrayal, so he’s a talented performer and will be a great addition to Port Charles.

Mathison has most recently been part of Home & Family, Hallmark’s lifestyle talk show, but they’ll be wrapping things up by the end of August. Home & Family will end following the conclusion of its ninth season, so that’ll certainly free up some time in Mathison’s schedule.

It’ll be interesting to see how long Mathison sticks around on GH and who he’ll actually play.

General Hospital spoilers say several storylines are set up heat up and move in some surprising directions, so there’ll be plenty of opportunities for Mathison’s character to join the drama!

As for some of Mathison’s other work, he was previously featured on Desperate Housewives, Castle, and many Hallmark projects – including the popular Murder, She Baked mini-series.

You might also recognize Mathison from the time he spent as a correspondent on Extra, Entertainment Tonight and Good Morning America.

Who do you hope Mathison will portray once he hits Port Charles? Could Mathison’s character be connected to a major family in PC or will just he a mysterious stranger?

Time will tell, but we can all look forward to Mathison’s arrival and all the talent he’ll bring to the table. General Hospital viewers are already giving Mathison a warm welcome ahead of his big GH debut.