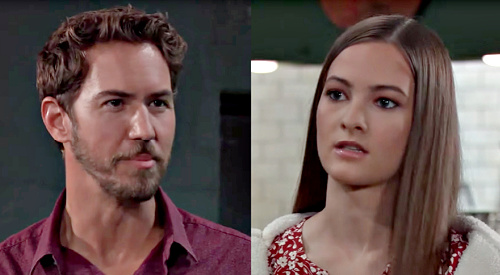 General Hospital spoilers tease that evil begets evil – and while Esme Prince (Avery Kristen Pohl) certainly seems to be fixated in some way on Ryan Chamberlain (Jon Lindstrom), that doesn’t necessarily mean they are related. Other General Hospital spoilers have teased Ryan could be Esme’s birth father, but could it be someone else? Could Peter August (Wes Ramsey) be Esme’s father?

General Hospital viewers know several things about Esme and her past – obviously, she is Spencer Cassadine’s (Nicholas Chavez) girlfriend.

General Hospital viewers will recall that they met at his boarding school in France, and she revealed to Ava Cassadine (Maura West) several episodes ago that she was adopted.

Esme also told Ava that she wasn’t close to her adoptive family or siblings. Although Esme’s age hasn’t really been revealed, it can be assumed that she is in the same age range as Spencer and the rest of the Port Charles teen scene.

Remember, a boarding school is not necessarily a college, and Spencer was in the boarding school for at least a couple of years if not more. Esme could even be a little younger although eighteen is probably about right.

Valentin Cassadine (James Patrick Stuart) had always thought he had followed Anna, not Alex, to the midwife in Belgium where Peter was born. Robin was conceived after Anna and Robert Scorpio (Tristan Rogers) married after spy school, so Peter would be likely older than Robin.

Peter would have been in Europe during the time that Esme was conceived, so that fits with him possibly being her birth father.

With Peter being at least forty-five years old if not maybe forty-six or forty-seven, it’s doubtful that Maxie Jones (Kirsten Storms) was either his first girlfriend or his first hookup, even though he acted all sweet and innocent.

General Hospital viewers also can see that possibly Esme looked for her birth parents but perhaps went down the wrong trail, and came up with Ryan. Ryan did spend time in Europe, while he was working for the DVX.

Think about this – Cesar Faison first surfaced in Paris, France in 1990, under the alias P.K. Sinclair.

Longtime General Hospital viewers will remember that Faison was the former employer of Anna during her days with the World Security Bureau (WSB)’s rival agency, DVX. Alex also worked for the DVX, and there’s a distinct possibility Peter could have interacted with them also.

Peter is likely to have ties to France since his father did. Esme and Spencer’s school is in France.

Peter is obsessed with finding his daughter with Maxie, Louise August (Harper and Scarlett Bloom). Perhaps that is because years ago another daughter was taken from him by her mother – and put up for adoption.

It sounds like the pieces certainly are in place for Peter to have fathered Esme, and it’s possible that they just haven’t found each other yet!