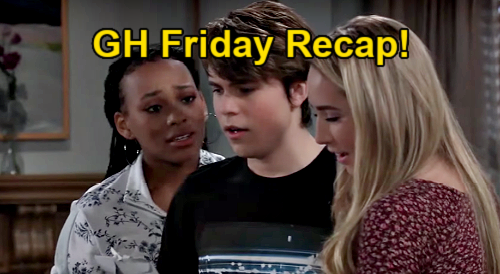 Josslyn and Trina brought Valentine’s Day candy for Cameron, and the friends had a great time together, until Josslyn found Cameron’s acceptance letter from Stanford in his backpack.

At the Quartermaine mansion, Harrison Chase (Josh Swickard) came to pick Willow Tait (Katelyn MacMullen) up for their Valentine’s Day date. Michael Corinthos (Chad Duell) was standing by, and as Chase and Willow left, Sasha Gilmore (Sofia Mattsson) showed up at the door for her date with Michael.

Michael and Sasha talked about how tense things were with Chase and Willow, and together they established that they wanted to get to know each other again. As Michael and Sasha were headed out to the Metro Court, Michael got a shocking call from Carly Corinthos (Laura Wright).

At the Port Charles Grill, Elizabeth Baldwin (Rebecca Herbst) and Franco Baldwin (Roger Howarth) walked in, prompting another couple to leave the establishment in fear.

Franco said that he didn’t feel so good, and he headed toward the men’s room while Ava Jerome Cassadine (Maura West) and Nikolas Cassadine (Marcus Coloma) showed up.

Elizabeth told Ava and Nikolas that Franco had started radiation, and when Franco came back to Elizabeth, he showed her that tufts of his hair were coming out from the treatment. Later, Franco wasn’t feeling well during dinner, and he and Elizabeth ended up leaving the restaurant.

At their table, Ava and Nikolas were enjoying their dinner when a present showed up from the waiter “for Mrs. Cassadine.” The gift turned out to be a cockroach in a little insect case, and both Ava and Nikolas wondered who would send her a gift like this. “We’ll find out,” Nikolas said.

At another table, Willow and Chase dined and were having a nice time when Willow requested a certain wine.

Willow gushed that Michael had a wine expert come in and school them on wines, and she continued to go on about how Michael had the gatehouse redecorated for her. Still, Willow and Chase seemed to have a good time together.

At some nightclub, Portia Robinson (Brooke Kerr) and Curtis Ashford (Donnell Turner) were on their stakeout together. Portia really seemed to enjoy herself, since she never goes out otherwise.

Together, Portia and Curtis got photos of the people they were tailing, but Portia wanted to stay, tickling Curtis.

At the hospital, Jordan Ashford (Briana Nicole Henry) entered Brando Corbin’s (Johnny Wactor) room. Brando had an obvious leg injury, and Jordan demanded to know who had shot him.

Just then, Jason Morgan (Steve Burton) entered the room, and Brando said he was on his way to meet Cyrus Renault (Jeff Kober) when someone unknown shot him.

Jordan was annoyed that Brando couldn’t provide any more information, and Jason noted that now that Brando was out of commission, then he couldn’t do Cyrus’ bidding.

Jordan figured there was more to this story, and she left irritated. Brando then turned to Jason. “Dude, why did you shoot me?” Brando fumed.

Jason said he did it because Brando was stuck with Cyrus. Just then Michael and Sasha walked in.

Sasha was clearly concerned about Brando, and Michael noticed as she talked easily with Brando. Michael and Sasha left, and Michael got a text, causing him to say that there was a change of plans.

Elsewhere in the hospital, Britt Westbourne (Kelly Thiebaud) talked briefly with TJ Ashford (Tajh Bellow), who was on a hurry out of the hospital for his commitment ceremony with Molly Lansing-Davis (Haley Pullos).

From there, Britt went into a room where Brad Cooper (Parry Shen) was, and the friends were reunited for Valentine’s Day.

As it turned out, Britt had finagled a hospital visit to get Brad out of Pentonville for the day. Brad wondered if Lucas Jones (Matt Trudeau) knew that he was in the hospital, and Britt skirted the question. When Britt took Brad’s hand, Brad noticed her tremors and Britt made up some excuse.

When Britt went out into the hallway, she ran into Jason, whom she asked to help her deliver Valentines to the kids on the pediatric ward. Jason smiled happily at Britt.

Outside of Brad’s room, Felix DuBois (Marc Samuel) asked Lucas out for a drink, and Lucas agreed as Brad watched sadly from inside the room.

In another area of the hospital, TJ was frustrated because he couldn’t get a ride share, and Jordan came along and wondered if everything was ok. TJ explained that he was late to meet Molly, and he asked his mom for a ride. Jordan happily agreed.

At the justice of the peace, Kristina Corinthos-Davis (Lexi Ainsworth) and Molly waited for TJ. Molly hoped that Sam McCall (Kelly Monaco) and Alexis Davis (Nancy Lee Grahn) would understand that they were having the commitment ceremony without them. Molly said a small, intimate ceremony felt right.

Unfortunately, the snippy clerk said that TJ had 20 minutes to get there before the office closed. Kristina told the clerk that this night needed to happen, and she whipped out a wad of fifty-dollar bills and slid it across the counter to the clerk.

General Hospital is on fire right now, so stay tuned! We’ll give you updates throughout the weekend as more GH news comes in. Stick with the ABC soap and we’ll keep you up to speed on the latest General Hospital spoilers, updates, and news.