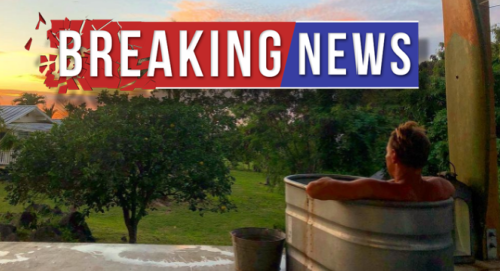 General Hospital (GH) spoilers has some great news to pass on about when GH is going to return to its regular production schedule. As you might be aware, TV and film production in Los Angeles did not immediately resume after the holidays due to the rising incidence of COVID-19 in the area.

According to reports at the beginning of the new year, most productions had planned to delay the start of production by a couple of weeks.

Well, it seems that General Hospital will be back up and return to production starting on January 22, according to a social media post by Ingo Rademacher, who portrays Jasper “Jax” Jacks on the ABC soap.

As you might know if you’re fortunate enough to follow Ingo on Instagram, he’s very active on his feed and frequently posts what he and his family are up to.

Recently, Ingo posted a photograph of himself in an ice tub overlooking a beautiful landscape on his property in Oahu, Hawaii, and in his accompanying message, he addressed the production re-start at GH.

“Last ice tub looking over my property, reflecting on all the amazing memories this place has given me,” Ingo wrote. “From meeting my wife just one beach over to Pohaku being born in the very house I’m looking at and our chickens roaming the yard. Such good times and memories. “

Ingo continued: “But also super stoked to be heading back to @generalhospitalabc next week and continue shooting our awesome show with the best crew and cast that anyone could hope for. We start shooting again on January 22 after many, many Covid tests.”

Some of Ingo’s GH costars have responded to his message. Wes Ramsey (Peter August) replied by saying: “Safe travels.” And Maurice Benard (Sonny Corinthos) replied with some enthusiastic emojis in response to Ingo’s sentiments.

Many of Ingo’s fans responded to his message with enthusiasm as well. For example, one fan commented: “I would have a hard time leaving that beautiful view, but love you on GH! Stay well!” And someone else wrote: “Be safe, looking forward to see more GH!!!”

At any rate, it’s great to hear that General Hospital will be back in production soon. We wish the cast and crew the best as they head back to work! Stay tuned to the ABC soap and remember to stick with CDL for all the latest General Hospital spoilers, daily episode recaps, and news.