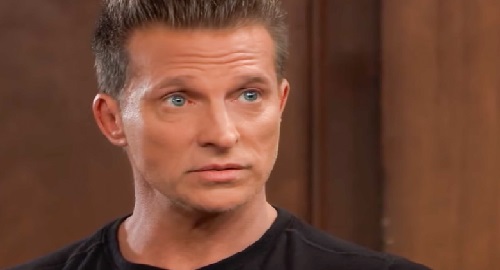 General Hospital (GH) spoilers reveal that it’s time to talk about whether there’ll be a Jason Morgan recast or if the door will be left open for Steve Burton’s return. What’s the long-term plan when it comes to Jason?

There’s no denying that Jason is a popular character who’s often been at the center of the action. Jason’s absence will create a void, so the show will have to make some decisions on how they’ll fill it.

Could a Jason Morgan recast happen at some point? We certainly can’t rule it out since Jason is such an important character, but it’d be better to let the current storyline play out before making any hasty decisions.

There’s plenty of drama to explore regarding Drew Cain’s (Cameron Mathison) return to Port Charles, so that’ll be a great way to let Jason take a backseat for a bit. As for what might happen with Jason down the road, Steve Burton is willing to make a comeback if the vaccine mandate is ever lifted.

Of course, that’s not happening in the foreseeable future, so we should get used to the idea of Steve Burton not being back on GH for a while. It’s always possible Burton will change his mind, get the jab and work something out with the show, but he seems pretty resolute in his decision for now.

Even so, they could leave the door open indefinitely when it comes to Steve Burton making a return. If they choose not to recast, the role will be right there waiting for Jason to come claim it again – even years down the line.

However, the show has also proven they’re willing to shove a recast aside – like when they pushed Billy Miller out of the role due to Steve Burton’s comeback. With that in mind, it’s possible General Hospital will recast AND leave the door open for Jason’s return at some point!

Whatever the case, Jason’s future remains up in the air for the time being. Do you want to see a Jason Morgan recast or would you rather wait to see if Steve Burton might come back? We’ll deliver updates as other GH news emerges.

General Hospital spoilers say Jason’s fate will remain a key part of the story moving forward, so stay tuned. CDL’s where you want to be for fantastic soap spoilers, news and updates, so check back often.