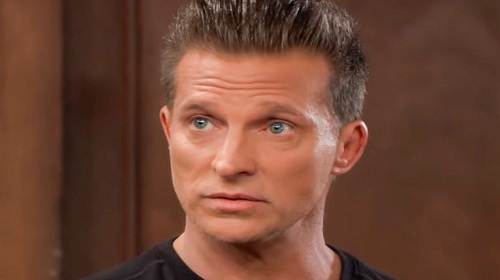 General Hospital (GH) spoilers tease that Jason Morgan (Steve Burton) may get a heartbreaking funeral as Port Charles offers a hero’s farewell. Let’s talk about this tough goodbye and what it’ll mean for the people Jason’s leaving behind.

That meant Jason cared as well and sent him heading off to Greece for what would be his final heroic mission. Jason played a huge role in saving both Obrecht and Drew Cain (Cameron Mathison) from Peter August’s (Wes Ramsey) evil clutches.

However, Jason paid a steep price for joining Britt on this search and rescue. That’s something Britt will have to live with now that Jason’s gone, but he wouldn’t want her to blame herself or wallow in self-pity.

Regardless, Steve Burton has finished off his run since Jason was presumed dead in the Cassadine tunnel collapse. Now it’s all about helping Jason’s loved ones find some form of closure. The news of Jason’s demise is going to hit Carly Corinthos (Laura Wright) and Sonny Corinthos (Maurice Benard) awfully hard.

The same goes for Michael Corinthos (Chad Duell) along with Jason’s kids. Danny Morgan (Porter Fasullo) and Jake Webber (Hudson West) will have to face the crushing blow of losing their father all over again.

Perhaps Jake and Danny can take some comfort in knowing their dad helped save Uncle Drew, who’ll be returning to PC soon. Scout Cain (Ella Ramacieri) will get her father back, so Jason’s death wasn’t in vain. Jason was able to deactivate Drew with Britt’s help and ultimately put him on the path home.

Still, this loss will be a devastating one for the people Jason meant something to. Britt may take it the hardest since she feels responsible and is losing someone she cared deeply for.

Whether there’s an onscreen funeral or not, Jason’s loved ones will surely want to honor his memory in some way. Even if viewers don’t get a chance to see a full memorial service, it’s hard to imagine Carly and Sonny in particular letting Jason go without a proper sendoff.